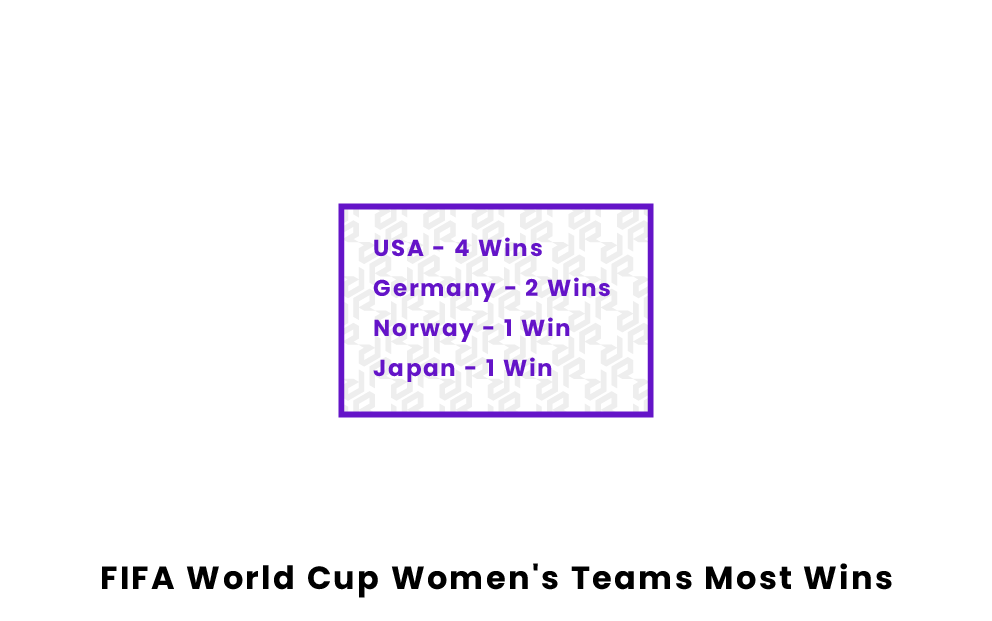 Though the men’s World Cup has been around for countless years, the women’s FIFA World Cup was only introduced in 1991. Top soccer talent from all over the world comes together to compete for the championships, but in the end, only one team can claim the trophy. Keep reading below to learn more about the countries with the most women’s World Cup wins.

Which team has won the most World Cups?

The United States has been dominant in women’s soccer, with four World Cup wins. They won the first-ever women’s World Cup in 1991 by a score of 2-1 after going undefeated for the entire tournament. In 1999, they made it back to face the Chinese national team. The heat outside was over 100 degrees, and both teams went scoreless in regulation, so the game was sent to penalty kicks. The Americans converted on all five of their kicks to win in front of over 90,000 fans, one the largest audiences ever for a women’s sporting event. They made the finals in 2011 but were on the wrong side of penalties this time, losing 3-1 to Japan. However, the national team wasn’t done there, as they have since won two more championships. They repeated as champions in 2015 and 2019, winning in a blowout revenge game 5-2 over Japan in 2015 and defeating the Netherlands 2-0 in 2019 for their record fourth title.

The only other country to win multiple World Cups, Germany’s women’s soccer team has secured two World Cup wins. They made their first-ever appearance in the championship match in 1995 but were unable to score against Norway. In 2003, they made it back, but scoring once again presented an issue. They got a goal in the 46th minute to tie the game at 1-1, but the score remained the same for the second half of the match. However, in extra time German player Nia Kunzer netted a goal at the 98th minute, marking the only time in history a World Cup final was decided on a “golden goal.” They defended their title by dominating the following World Cup, going on to shut out Brazil in the 2007 final.

When the women’s World Cup was introduced to the sporting world in the early nineties, Norway was seen as one of the top international teams in women’s soccer yet have only secured one World Cup title. They made it to the finals in the first World Cup in 1991 but lost to the United States. Undeterred, Norway made it back in 1995 to play Germany, winning 2-0 to capture their first World Cup victory. Since then, Norway has yet to return to the championship match, though many speculate they could have won more titles had the women’s World Cup been created sooner.

Japan’s journey to and through the World Cup final was the opposite of Norway’s, however they are tied with one World Cup win. They made their first-ever appearance in 2011 and took down the powerhouse of the United States on penalty kicks, becoming the first Asian team ever to win the women’s World Cup. However, their next run to the finals came up just short. They returned to the championship in 2015 but lost handily to the American team they had defeated just four years earlier, going down 4-0 in the first 16 minutes before eventually losing 5-2.

What country has the most women’s World Cup wins?

The country with the most women’s World Cup wins is the United States, with four. The country is seen as one of the most dominant in the world when it comes to women’s soccer. They won the first-ever women’s World Cup in 1991 and won their second championship in 1999. Four World Cups later, they returned to win the 2015 title match, and in 2019 they repeated as champions.

What women’s player has the most World Cup wins?

What women’s player has scored the most goals in the World Cup?

The women’s player with the most goals scored in World Cup history is Marta with 15. Marta, a Brazilian midfielder, played for her national team five times in the World Cup from 2003 to 2019. She scored 15 goals in 17 matches, as well as three penalty kicks. She is often regarded as one of the greatest female soccer players of all time and is certainly one of the best World Cup performers ever.