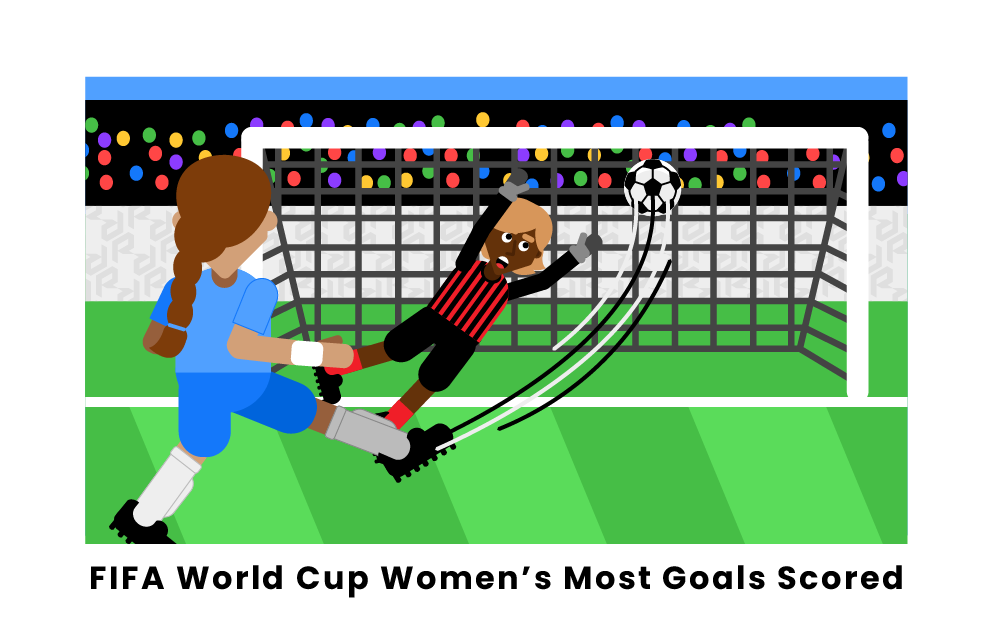 One measure of success in the FIFA World Cup is the number of goals scored. Below are the statistics of the goals made by the best-scoring countries and players, along with more details about the history of the Women’s World Cup.

However, just because a country has scored a lot of goals in the World Cup, it doesn’t necessarily mean they have won more World Cups themselves. For example, even though Norway has scored a total of 54 more goals than Japan, both have only won one World Cup.

The United States, Brazil, and Germany have two players on the above list. From most goals to least goals total, Brazil is first, with Marta and Cristiane having a total of 28 goals. The United States is second, with Abby Wambach and Michelle Akers, who together have a total of 26 goals. Germany comes in third, with Birgit Prinz and Bettina Weigmann combining for 25 goals. China is the last country included in this list, with Sun Wen scoring eleven goals at the Women’s World Cup.

Marta is the highest women's goal-scorer in World Cup history. To get this title, she rose above Birgit Prinz and Abby Wambach’s records and scored her fifteenth goal against South Korea in 2015. Marta also broke the record for the most goals scored by a man or woman in a World Cup ever. Miroslav Klose, from Germany, previously held the record with sixteen goals. Marta broke this record when she scored her seventeenth goal against Italy in the 2019 Women’s World Cup.

One thing demonstrated by these statistics is that success in the FIFA World Cup depends more on the goals scored by the team than on the goals scored by an individual player. Marta and Cristiane scored 28 goals for Brazil, making them the highest-scoring pair of all countries in the Women’s World Cup, but even with their efforts, Brazil has never won.

In this numbers game, then, it is clear that goals make a World Cup win possible. But, it is even more clear that a team’s combined efforts are what makes them champions.