Which FIFA World Cup Teams Were The Least Likely To Win Ever? 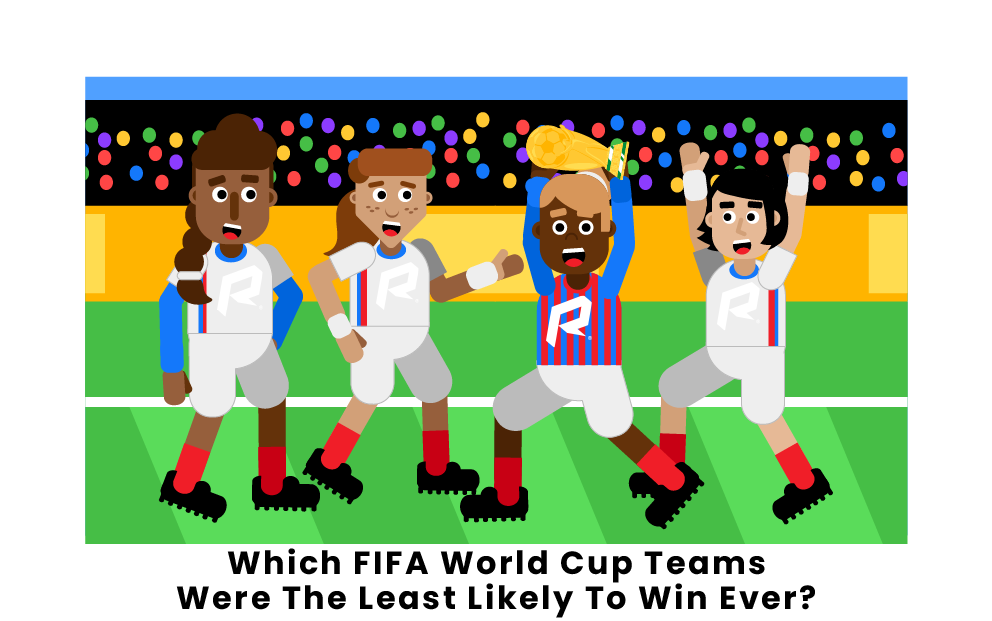 There have been many isolated upsets in FIFA World Cup history, but very few true underdog stories. Some squads, like Croatia in 2018, fall just short of the ultimate goal, while others have gone on to win the whole tournament. Read on below to learn about the greatest Cinderella Stories that won the World Cup!

The West Germans pulled off arguably the greatest single-game upset in World Cup history, but the team was fortunate just to be in that game. That year, the Germans had trouble just making the World Cup, and were grouped together with Hungary, Turkey, and South Korea in the opening rounds. Germany got past Turkey in its opening match but got routed 8-3 by a powerful Hungarian team. The Germans needed a big victory in their final match of the group stage to make the knockouts, and they beat Turkey again, this time 7-2.

The quarter and semifinal games resulted in convincing wins for West Germany, which resulted in an intense rematch with Hungary in the World Cup Final. The Hungarians were heavily favored and took an early 2-0 lead in the match. However, Germany tied the game by the end of the first half and scored the winner in the 84th minute. This match became known as the “Miracle of Bern.”

In the month leading up to the start of the 1998 World Cup, France was ranked 18th in the world soccer team rankings, the lowest ranking for an eventual World Cup Champion since team rankings began in 1992. Still, the French had a formidable squad headlined by Zinedine Zidane, who was at the apex of his powers. The French National Team won all of their group stage games with a goal differential of +8. However, France scored just one goal in its first two knockout games, but managed to win both matches. The first came against Paraguay, which was a 1-0 win; then the French upstaged the Italians in penalties to reach the final four.

In the semifinal, France met Croatia and fell behind early in the second half, but Lilian Thuram scored twice for the French to put them into the final against Brazil. The Brazilians were the top-ranked team entering the tournament and had survived their own scares in earlier matches. But, France proved to be more than up to the challenge by steamrolling Brazil 3-0 in the final.

The 2006 Italian team wasn’t as much of an underdog but more of a team that managed to break through one of the toughest groups in World Cup history. They then used that momentum to win the whole tournament. The Italians were ranked a respectable 13th just a few months before the World Cup, but were placed in a group with the Czech Republic (2nd), the USA (5th), and Ghana (48th). Ironically, the two lowest-ranked teams of this group, France and Ghana, ultimately advanced into the knockout rounds.

Aside from a close 1-0 win over Australia in the Round of 16, Italy cruised through the next two matches, which included a 2-0 victory over host-country Germany in the semifinal. In the World Cup Final, Italy faced France who had won the World Cup in 1998, and still had one of the best players in the world in Zinedine Zidane. Zidane scored early in the contest on a free kick, but the Italians bounced by shortly after. The match went into extra time, where one of the most infamous moments in all of soccer occurred, as Zidane was ejected for head-butting Marco Materazzi. The Italians eventually upstaged the French in penalties, scoring on all five of their attempts.

What is the lowest-ranked team to have won the FIFA World Cup?

Since FIFA began formally ranking countries in 1992, the 1998 France national team is the lowest-ranking squad to have won the World Cup. The French were ranked 18th in the world just one month before the tournament began, but they managed to get all the way to the final. Then, France completed its run by crushing Brazil by a score of 3-0.

What is the lowest-ranked team in the 2022 FIFA World Cup?

The lowest-ranked team to qualify for the 2022 FIFA World Cup is Ghana. There are only 32 teams in the World Cup, yet the Ghanaians are ranked 60th in the world. The only other nation outside the top 50 is host country Qatar, which is ranked 51st.

Pages Related to Which FIFA World Cup Teams Were The Least Likely To Win Ever?