Which Big Countries Have Never Played In The FIFA World Cup? 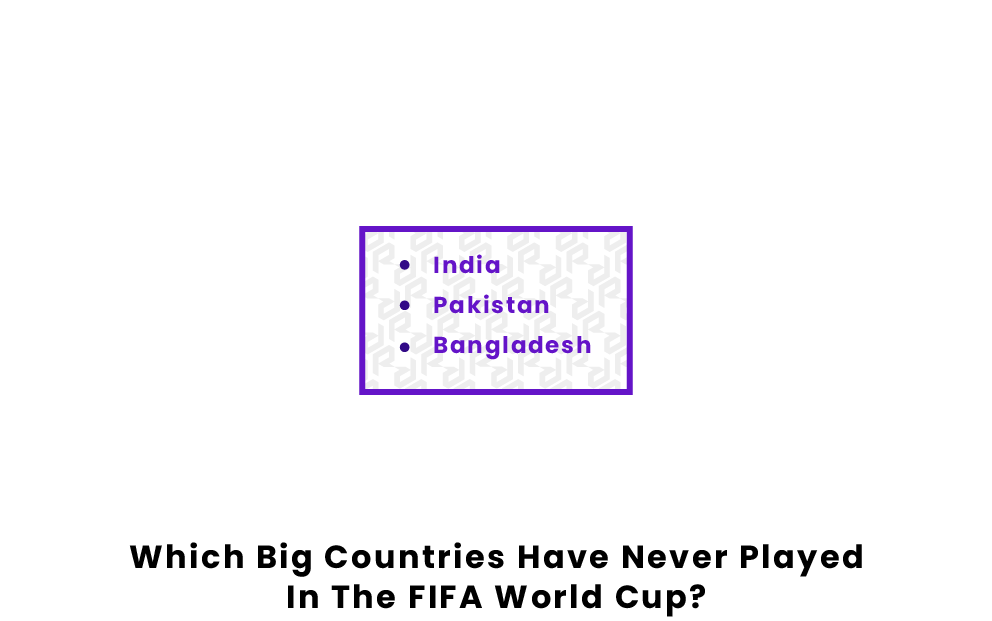 Nearly 80 nations have competed at the FIFA World Cup since the tournament began in 1930, and there’ve been between 13-32 teams participating each year. Despite a relatively large number of nations being accepted, there remain some massive countries that have never appeared in the World Cup.

Over one billion people live in India, giving the country the second largest population in the world. However, they have never appeared in the World Cup despite trying to qualify eight separate times. The team’s greatest success came in the 1950s-1960s when it won the 1951 and 1962 Asian games in addition to finishing fourth at the 1956 Summer Olympics. Unlike most large non-participating nations, India has technically qualified for the World Cup. In 1950, they were allowed to play, by default, but decided to withdraw from the tournament for not being able to play barefoot.

There are many reasons that a country with such a large population as India hasn’t ever appeared at the World Cup, but the main ones are the lack of high-level leagues within the nation and the lack of youth development. India has mostly turned its attention to other sports like cricket and field hockey instead. Still, if the country decides to invest in its soccer program, Team India can be a perennial powerhouse as former FIFA President Sepp Blatter stated that India is a “sleeping giant”.

Pakistan’s futility on the international soccer scale is truly unprecedented, especially considering the fact that it has over 200 million people living there. Now, the good news for Pakistan is that the World Cup is expanding to 48 teams in 2026, which means there’ll be more slots for Asian countries to participate. The bad news is it’s also the only Asian country to have never even won a World Cup Qualifying match. The nation has also never qualified for any major tournament outside of South Asia. Like India, Pakistan’s main sport is cricket, while field hockey and squash are also quite popular. In fact, the country hadn’t even had its own soccer stadium until 2022, when one was established in the city of Karachi.

The country of Bangladesh contains the seventh largest world population and is yet another South Asian nation that has yet to appear in the FIFA World Cup. Bangladesh has qualified for the Asian Cup one time in 1980, making it one of just two South Asian countries to even make an appearance at that tournament. Bangladesh established a national soccer team in 1973, but have failed to qualify for the World Cup all nine times that they have attempted.

What nation has failed to qualify in the most number of attempts?

Incredibly, the country of Luxembourg has tried 20 times to qualify for the FIFA World Cup and has never succeeded. It has also participated in every Euro qualifier since 1964 but has also never made an appearance on the infamously tough European qualifying stage.

Which American nation has failed to qualify the most amount of times?

The country of Guatemala is one of 24 American nations that have failed to qualify for the tournament, even though the country has tried to do so 15 total times. Unlike some non-qualifying nations, Guatemala has achieved some international soccer success, making three Olympic appearances in 1968, 1976, and 1988.

How many nations have tried to qualify for the World Cup one time and failed?

Only six nations have tried to qualify for the World Cup one time and failed. The first four nations are still around: Bhutan, South Sudan, Gibraltar, and Kosovo. The other two are Saar and South Yemen, which are both now defunct nation-states.

Pages Related to Which Big Countries Have Never Played In The FIFA World Cup?