What Countries Have Never Won A FIFA World Cup? 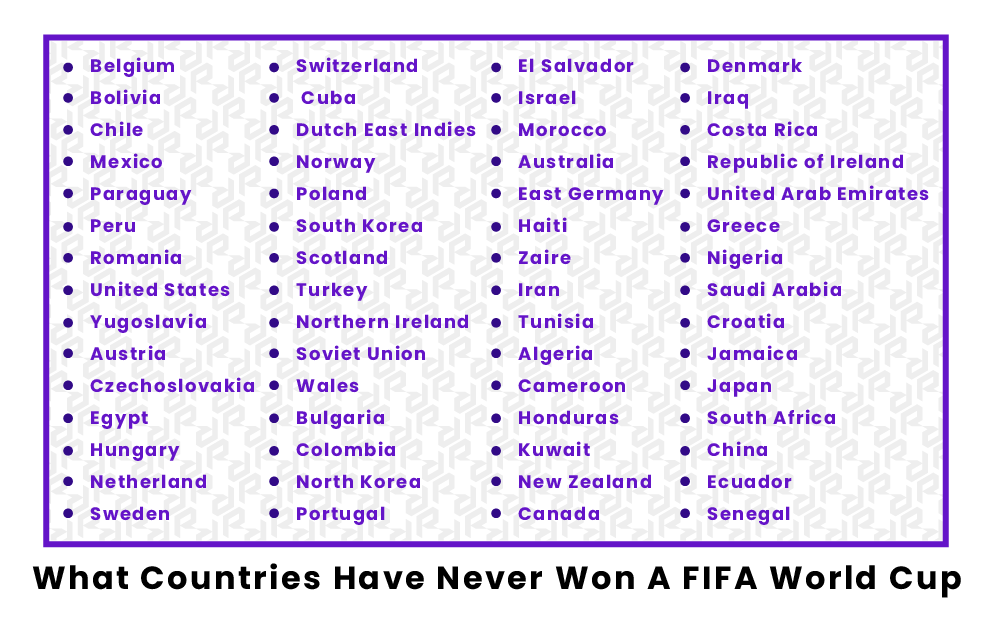 Since the FIFA World Cup began in 1930, there have been 79 national teams that have competed in the tournament. However, only eight total countries have ever won the entire thing. From last-second heartbreaks to stunning upsets, read below to learn about the greatest national soccer powers that have yet to win the World Cup.

Counties That Have Never Won A World Cup

Below are countries that have not won a FIFA World Cup, ordered alphabetically:

Despite being one of the largest and wealthiest countries in the world, the U.S. has never won the World Cup. In fact, the Americans have never even appeared in the World Cup Finals. The closest the country has ever got to winning the tournament came in the inaugural World Cup in 1930, when the United States finished in third place. Through 2022, the United States has qualified for the tournament 11 times, including a stretch of seven tournaments in a row from 1990-2014. However, since that third-place finish, the U.S. has only reached the quarterfinals one time as the country lost to Germany 1-0.

Perhaps no nation has had a more cursed experience at the World Cup than the Netherlands. The Dutch are the only country to appear in at least three World Cup Finals without winning a single one. Two of them came in a row (1974, 1978), and the other loss happened in 2010. In 1974, Johan Neeskens got Holland off to a hot start, scoring in the second minute of play, but Germany scored two first-half goals, which proved enough for the win. In the next tournament, the Netherlands ran out of gas as it lost to Argentina in extra time 3-1. However, 2010 is perhaps the most gut-wrenching loss the nation has experienced. Again in extra time, Spain’s Andres Iniesta scored in the 116th minute to give the Spanish a 1-0 victory.

Besides the Netherlands, the only other country that hasn’t won the World Cup but has appeared in multiple finals is Hungary. The Hungarians haven’t qualified for the World Cup since 1986, but in the earliest years of the tournament, they were a perennial power. The country has appeared in two World Cup Finals (in 1938 and 1954) and has made the quarterfinals an additional three times. First, Italy proved too much for Hungary to handle in 1938, winning 4-2 with the game never being in doubt. In 1954, Hungary was favored to win the World Cup, with its team even being known as the “Mighty Magyars.” The nation had won 31 consecutive matches and had a two-goal lead early in the match against West Germany, but Hungary's lead evaporated quickly, and Helmut Rahn scored the winner for the Germans in the 84th minute.

What team has made the most appearances without reaching the quarterfinal?

Scotland has made the most World Cup appearances without reaching the quarterfinal (eight). Scotland has appeared in the World Cup eight times, with its first appearance coming in 1954 and the latest being in 1998. However, the Scottish have never even made it past the Group Stage in any of their attempts. In fact, the country has won a grand total of four matches in its tournament history.

Has Mexico ever reached the semifinals?

Following the 2022 World Cup, Mexico has made 17 appearances at the tournament and has yet to make it to the semifinals. The Mexicans qualified for every tournament between 1994 and 2018 but lost in the round of 16 every time. Mexico has only reached the quarterfinals twice (1970 and 1986).

What’s the greatest team not to win the World Cup?

The best team that didn’t win the World Cup in a particular year was the 1954 Hungarian team. Hungary cruised through the group stage, including an 8-3 beatdown to West Germany. Then, the country got past Brazil and the defending champion Uruguay. In the final, the Hungarians were once again pitted against the West Germans but lost 3-2. As one of the most stunning upsets in World Cup history, this match became known as “The Miracle of Bern.”

Pages Related to What Countries Have Never Won A FIFA World Cup?