What Are The Official Sponsors Of The 2022 FIFA World Cup? 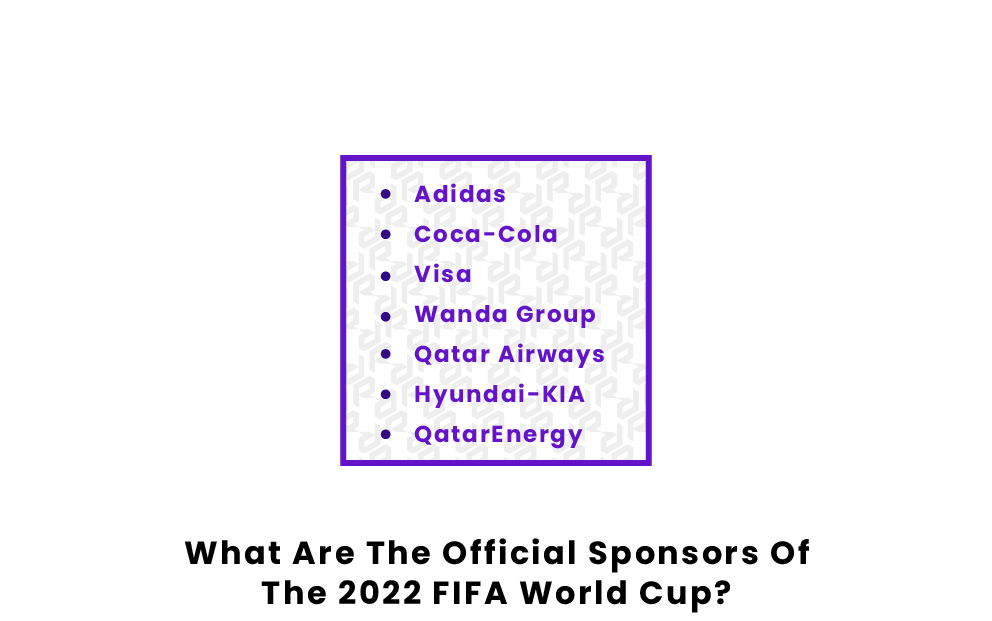 The FIFA World Cup is one of the largest global sporting events, providing a massive global marketing platform. Companies pay large sums to market themselves to a diverse fanbase on the global stage. FIFA has partnered with seven corporations for the 2022 Qatar World Cup, granting them commercial and branding rights to the event.

It is no surprise that Adidas will be sponsoring the 2022 FIFA World Cup. One of the largest soccer equipment manufacturers and athletic brands, Adidas has partnered with FIFA for over 50 years. FIFA and Adidas have built a close relationship over the decades. Notably, Adidas is the official match ball designer and manufacturer for the FIFA World Cup.

A massive beverage company distributed in over 200 territories, Coca-Cola will again be sponsoring the FIFA World Cup. Since 1950, Coca-Cola has advertised in FIFA World Cup stadiums around the globe, maintaining a close relationship with the soccer governing body. Additionally, Coca-Cola will be hosting the 2022 World Cup trophy tour in Qatar, allowing fans to learn about the history and allure of the winners’ prize.

One of the global financial and payment technology leaders, Visa has maintained a relationship with FIFA since 2007. The brand often participates in men’s and women’s FIFA tournaments serving as the preferred payment method for ticket holders and merchandise shops. Additionally, fans will see Visa branding and promotional materials throughout stadium locations.

The Wanda Group is a commercial property, finance, and cinema industry global powerhouse. One of the newer FIFA partners, the Wanda Group, began its relationship with soccer in the early 1990s by promoting Chinese soccer teams and the Chinese Super League. The Wanda Group has signed a partnership with FIFA that will last until 2030 and is focused on the longevity and sustainable development of the organization, investing in young supporters and players. Notably, the Wanda Group has played a key role in creating the FIFA Flag Bearers initiative, allowing young soccer fans the opportunity to carry the FIFA flag onto the pitch before games.

Since 2017, Qatar Airways has been a prominent name in global soccer. Often seen on the front of player jerseys from clubs such as F.C. Barcelona and A.S. Roma, Qatar Airways’ logo has become recognizable in the soccer world. The national airline of Qatar, the company began its formal partnership with FIFA in 2017. Since then, the transportation company has sponsored FIFA events such as the 2018 World Cup and the 2019 Women's World Cup. As the 2022 World Cup is hosted in Qatar, the state’s national airline will play a key role in the event’s success.

Global auto manufacturer Hyundai-KIA will also be sponsoring the 2022 Qatar World Cup. Beginning its relationship with FIFA in 1999, Hyundai-KIA has sponsored many FIFA competitions over the past two decades. The corporation will serve as the official automotive sponsor for the Qatar World Cup, assisting with ground transportation throughout the competition.

The seventh and final sponsor of the 2022 FIFA World Cup is QatarEnergy. Dedicated to the transition and development toward cleaner energy, the corporation began its partnership with FIFA in 2021, sponsoring the FIFA Arab Cup. The newest FIFA sponsorship partner on this list, QatarEnergy, is only on track to work with FIFA through the end of 2022. However, it is certain that the Qatar-based energy company will play a key role in the operation of its country’s World Cup.

Who is the biggest sponsor of the FIFA World Cup?

While there is no single largest sponsor of the FIFA World Cup, Adidas and Coca-Cola have had the longest relationship with the global event. Both companies have sponsored the FIFA World Cup for over 50 years.

Who is the official sponsor of the FIFA World Cup?

The official sponsors of the 2022 FIFA World Cup in Qatar are Adidas, Coca-Cola, Visa, the Wanda Group, Qatar Airways, Hyundai/KIA, and QatarEnergy.

How much does it cost to sponsor the FIFA World Cup?

Sponsorship costs for the FIFA World Cup range greatly depending on the individual brand agreements and logistics. While no official numbers have been reported, many estimate figures in the hundreds of millions to billions of dollars. Becoming an official partner of a FIFA World Cup is a very costly opportunity!

Pages Related to What Are The Official Sponsors Of The 2022 FIFA World Cup?