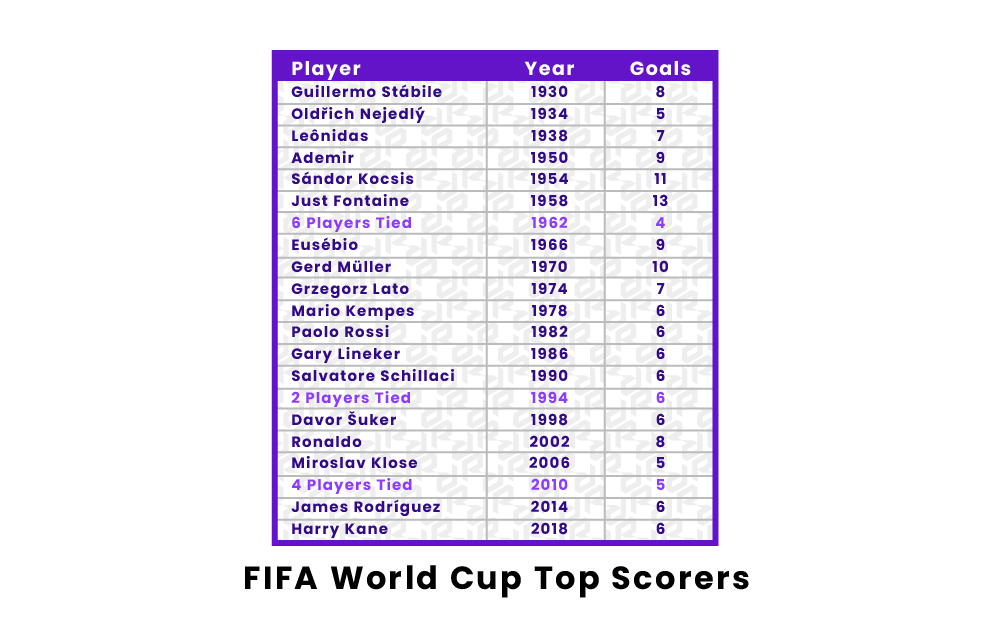 Every four years, the men’s FIFA World Cup attracts audiences from around the world. As the second most viewed sporting event in the World, the World Cup certainly attracts fans for all sorts of reasons. One of those many reasons is to see the world’s top players on the biggest stage, and, over the years, those top players have produced several top goal scoring performances. Below, the top goal scorers at each World Cup are listed, and a few of the most outstanding performances are discussed.

Who scored the most goals in the FIFA World Cup?

Without a doubt, one of the most impressive performances in the history of the World Cup is the six-match run of Frenchman Just Fontaine at the 1958 tournament in Sweden. That year, Just Fontaine scored an incredible thirteen goals, a record that still stands to this day for the most goals scored in a single World Cup. He scored at least one goal in all six matches he played, including a hat trick in the opening game against Paraguay and a four-goal performance in the match that took France to third place. In fact, even though this was the only World Cup he participated in, Fontaine still ranks fourth on the all-time World Cup goals list. For context, the three players ranked ahead of him all played at least thirteen matches, while he played in just six. After Fontaine, the only two players to score at least ten goals at one World Cup are Sándor Kocsis (11) in 1954 and Gerd Müller (10) in 1970.

Which Player Scored the Most Goals in One World Cup?

Which Player has Scored the Most World Cup Goals of All-Time?

The player with the most World Cup goals scored of all-time is German Miroslav Klose, who scored sixteen goals between the four World Cups he played in (2002, 2006, 2010, 2014). Klose scored his sixteen goals in twenty-four matches played, meaning he averaged about 0.67 goals per match. After Klose, Ronaldo from Brazil has the second most goals scored with fifteen.