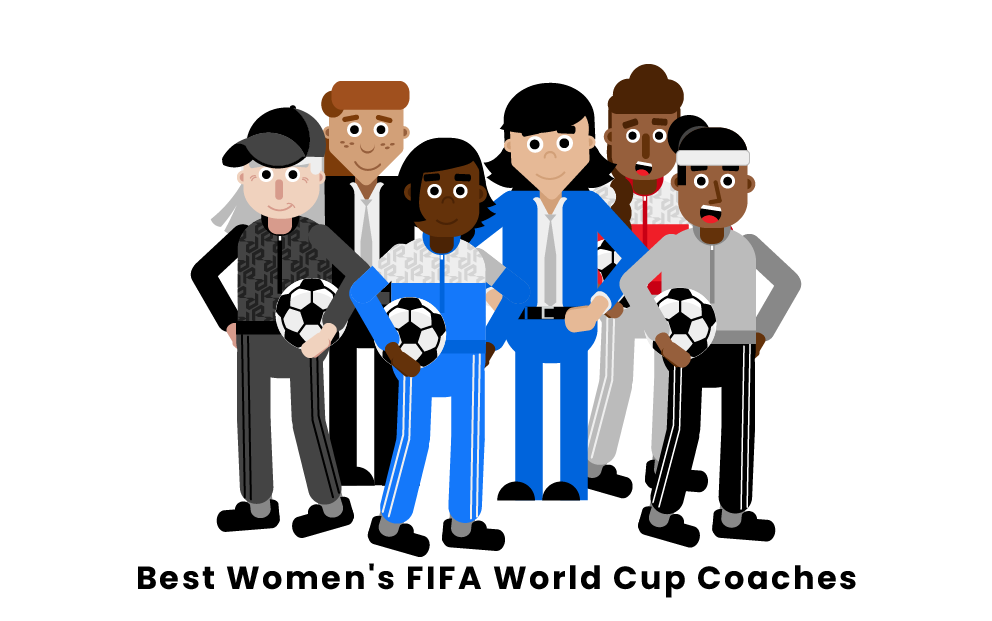 Since the first edition in 1991, players like Carli Lloyd and Marta have delighted us with some unforgettable World Cup moments. Behind their talent, there is the work of coaches like Jill Ellis. Let’s take a look at the six best FIFA Women’s World Cup coaches.

Who are the best women’s FIFA World Cup coaches of all time?

Born and raised in England, Jill Ellis has broken almost every record in only seven years at the helm of the United States Women’s National Team. After a long career as head coach in the NCAA, Jill Ellis became the interim coach of the USWNT in 2012 following the departure of the legendary Pia Sundhage.

Ellis took over the national team following the heartbreaking 3-1 penalty shootout loss against Japan in the 2011 FIFA Women’s World Cup final. However, Ellis was able to quickly turn around the squad, leading the USWNT to a dominating triumph in the 2015 World Cup and record-breaking back-to-back wins in 2019 before announcing her retirement from coaching.

After playing for ten seasons as a defensive midfielder for Japanese club NTT Kanto, Norio Sasaki started his coaching career in 1998 as Omiya Ardija’s head coach in 1998.

Sasaki joined the Japanese Women’s National Team department in 2006 as the head coach of the U-17 squad. After a brief stint in the youth categories, including two years as the U-20 head coach, Sasaki was promoted to head coach of the senior team in 2008.

During his eight years as the head coach of the women’s national team, Sasaki led Japan to a legendary win in the 2011 World Cup after defeating the USWNT in penalties. Sasaki almost reached back-to-back titles in 2015. However, the Japanese side was defeated 5-2 in the final by the United States squad.

Even Pellerud is one of the absolute legends in the history of women’s international soccer. The Norwegian coach has managed a record-breaking twenty-five World Cup matches at five tournaments coaching Norway and Canada. Pellerud led Canada to a surprising fourth place in 2003, but he has achieved his biggest successes with the Norwegian national team.

After a 2-1 loss in the final against the USWNT in the 1991 inaugural World Cup, Pellerud led Norway back to the final in the 1995 edition. There, the Norwegian national team dominated the group stage finishing with nine points and a staggering +17 goal difference, before taking Denmark and the USWNT down on their way to a 2-0 win against Germany in the final.

With three UEFA Women’s Championships wins as an assistant coach, three as a head coach, and a World Cup title, Tina Theune is among the all-time winningest coaches in women’s international football. Theune is also one of the biggest trailblazers in German women’s sports history as she was the first woman to obtain a coaching license in the country.

Theune took over the German women’s national team in 1996. After an early exit in the 1999 World Cup, Germany went on to win the tournament in 2003 in a dramatic fashion, as the team defeated Sweden with a golden goal winner.

Silvia Neid has been one of the main figures in the years of dominance of the German national team. Neid was part of Tina Theune’s coaching staff during the 2003 World Cup victory and then took over in 2005, leading Germany to another World Cup title in 2007 and Two UEFA Women’s World Championships.

Neid’s side cruised through the tournament in 2007 without allowing a single goal. After a group stage that included an 11-0 win against Argentina, Germany went on beat North Korea 3-0 in the quarterfinals and Norway 3-0 in the semifinals. The final was one-sided too, as Germany comfortably defeated Brazil 2-0.

Despite not having won a World Cup trophy, Pia Sundhage is considered one of the greatest coaches in women’s international football history. Starting in 2007, the Swedish coach has worked for some of the top women’s national teams in the world.

Which women’s World Cup coach has the most wins?

With sixteen wins in twenty-five matches managed, Even Pellerud is the all-time leader in wins at the FIFA Women’s World Cup. The Norwegian has coached at five different World Cups, reaching two finals with Norway and a third-place playoff with Canada. After losing the inaugural final to the USWNT in 1991, Pellerud led Norway to become the first European FIFA Women’s World Cup champion in 1995 after a 2-0 win against Germany in the final.

Who is the best women’s World Cup coach ever?

Being one of the only two coaches in international history, men’s and women’s, to have won two consecutive editions of the World Cup, Jill Ellis is the greatest FIFA Women’s World Cup coach ever. Ellis has won both World Cups in a dominating fashion defeating Japan 5-2 in the final in 2015 and routing teams in the 2019 tournament, as the USWNT registered a 13-0 win against Thailand in 2019. The team defeated Netherlands 2-0 in the final to give Ellis her second World Cup title.