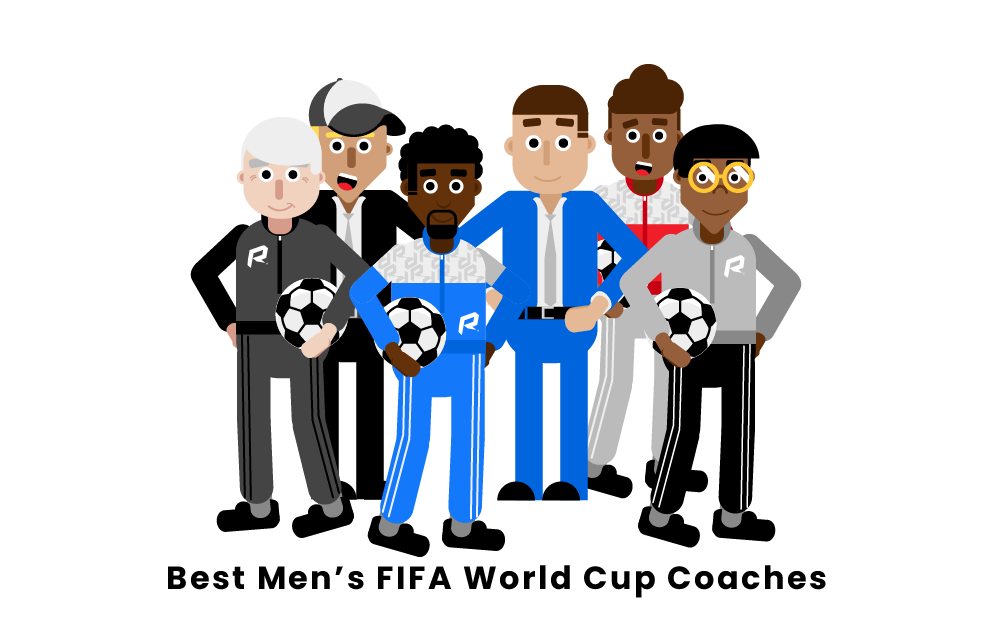 There have been 21 FIFA World Cups in history, which is why the event is so popular and competitive. Only 20 different coaches have won the World Cup, meaning that only one coach has won the World Cup twice. Given the limited opportunities, it is incredibly difficult to create a legacy at the World Cup as a manager, but continue reading to find out about six of the best coaches who managed to do so.

Who are the best men’s FIFA World Cup coaches of all time?

Vittorio Pozzo is the only coach to have ever won the World Cup twice, which means he’s coached about 9.5% of the World-Cup-winning teams in history. Not only did he guide Italy to two World Cups, but he did so consecutively in 1934 and 1938 while also helping them win the gold medal at the 1936 Berlin Olympics. Pozzo was a brilliant strategist that understood the game at an exceptional level. He helped create explosive offenses that produced a 9-0 victory against the United States at the 1948 London Olympics, an 8-0 victory against Japan during their dominant gold medal run at the 1936 Olympics, and a 7-1 victory over the United States at the 1934 World Cup.

Helmut Schon is a German-born coach that coached West Germany first as an assistant manager, and then as the head manager. Schon coached West Germany in four World Cups, which allowed him to set his still-standing record for the most World Cup games coached with 25. Of those four World Cup trips, Schon would make it to the final twice, losing to England in 1966 and defeating Holland in 1974. Impressively, Schon also had his teams performing well in the European Championships as well, winning in 1972 and losing in the final in 1976. As the manager of the West German National Team, Schon would win 87 of 139 matches, which gives him a win percentage of 62.59%, while also totaling 30 draws.

Franz Beckenbauer was an important member of the famous West German team that won the 1974 World Cup on home soil–and which was coached by Helmut Schon–before he became a great World Cup coach in his own right. Beckenbauer would guide West Germany to the World Cup Final in 1986, where they would fall to Argentina 3-2. Just four years later, Beckenbauer and West Germany returned to the World Cup Final, where they again faced Argentina, but this time they would come out on top 1-0. He experienced great success as the West German National Coach, and also as a manager for Bayern Munich. At Bayern Munich, Beckenbauer won nine German Championships, the Champions League once, six German Cups, six German League Cups, one UEFA Cup, and one Intercontinental Cup.

Carlos Bilardo is a famous soccer coach from Argentina who was well known for his ability to coach his teams on the biggest international stages. Bilardo controversially employed the 3-5-2 formation, a formation that was hardly used, but it worked wonders for the Argentina National Team during the 1980s. Diego Maradona famously played for Argentina during this period, and Bilardo helped bring the best out of Maradona while managing the egos of all the star players on his team. Argentina would defeat West Germany in the 1986 World Cup Final before falling to them in the 1990 World Cup Final.

Enzo Bearzot is an Italian legend that helped restore the Italian National Team to international greatness. Although Italy was an international powerhouse during the 1930s, they quickly fell off, experiencing 40 years or so with minimal success on the international stage with the exception of winning the 1968 European Championships. This did not matter to Bearzot, as he helped Italy win the 1982 World Cup despite facing stiff competition from Brazil and an Argentinian team featuring a young Diego Maradona. He introduced a free-flowing style of soccer that was a stark alternative to Italy’s traditionally rigid style of play.

Mario Zagallo was a Brazilian National Team coach that took on various roles throughout the years before and after serving as the head manager. In fact, Zagallo would rejoin the Brazilian National Team as an assistant coach in the leadup to the 1994 World Cup, which they would go on to win, making Zagallo the only coach other than Pozzo to win multiple World Cups, although Pozzo was the head coach for both victories. His first World Cup victory came way back in 1970 when he guided what many consider to be the greatest international team of all time through the tournament with ease.

Which World Cup coach has the most wins?

Helmut Schon has the most World Cup wins out of any coach ever, with 16. It would make sense that Schon has the most World Cup wins of all time as he has coached more matches than any other manager in World Cup history with 25. Schon did this across four World Cups, where he would go to the finals twice. Both times in the finals he faced Carlos Bilardo and Argentina, losing in 1986, but walking away victorious in 1990.

Who is the best World Cup coach ever?

Vittorio Pozzo is the best World Cup coach ever, as he is the only coach who can lay claim to winning the trophy twice. Not only did Pozzo guide Italy to two World Cups, but he did so consecutively while also leading them to an Olympic Gold Medal in between. Pozzo’s brilliance and tactics allowed him to have the Italian National Team win gold at an Olympics and two World Cups, all within the span of just four years, a feat on soccer’s biggest stages that no other coach can tout.