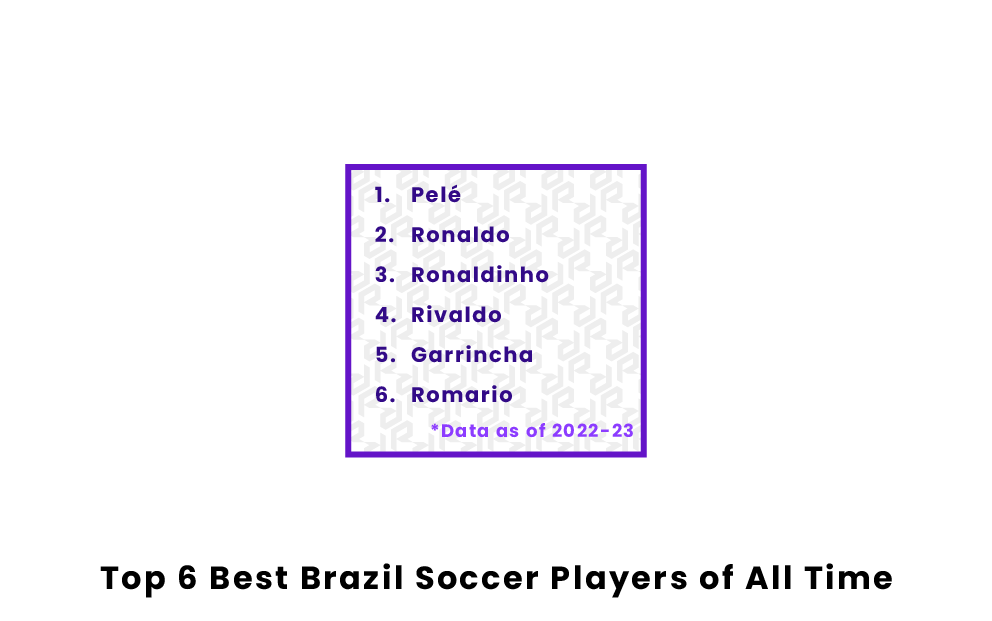 Brazil is often called the best soccer country in the world, and it has had some magnificent stars over the years. Much of Brazil’s dominance stems from the sheer size of the country; it is the largest in both South America and Latin America, and is the fifth largest country in the world. This list details the six greatest men’s footballers in Brazilian history.

Who Are The Best Brazilian Soccer Players Ever?

Edson Arantes do Nascimento, known as Pelé, is the greatest Brazilian soccer player ever to play. Pelé is regarded as not only the best Brazilian footballer but also one of the world’s best soccer players of all time.

Pelé has also won a number of non-football honors, including being listed as one of the TIME 100 Most Important People of the 20th Century and receiving an honorary knighthood from Queen Elizabeth II.

Ronaldo’s biggest moment came when he scored both goals in a 2-0 victory for Brazil in the 2002 World Cup Final match against Germany. Ronaldo also played in the 1998 and 2006 World Cups.

In the 1998 World Cup, Ronaldo recorded four goals and three assists before losing to France in the finals. Hours before the final match, Ronaldo suffered a seizure. He was scratched from the lineup but then begged his coach to let him play. He eventually got his way, but didn’t play to his usual high level of play due to the lasting effects of his convulsive fit. Despite this, he was awarded the Golden Ball for best player of the tournament.

Many believe Ronaldo could have been the best player of all time if injuries did not hold him back.

Ronaldinho also had a notable international career, which included a World Cup victory in 2002.

Rivaldo was a versatile player; he could play as an attacking midfielder, second striker, wide midfielder, or winger. No matter where he was playing on the field, he was dangerous. Rivaldo is remembered for his flashy goals, including bicycle kicks and heavily curved shots.

Rivaldo played for 14 different clubs over the course of 25 years. In club play, Rivaldo ended up with 249 goals in 553 games. Rivaldo also played 74 matches for his country, scoring 35 goals in these international games. Rivaldo was a part of Brazil’s 2002 World Cup team, which won the World Cup.,

Manuel Francisco dos Santos, most commonly known as “Garrincha,” is a former Brazilian footballer who played with Pelé. Garrincha won World Cup titles in 1958 and 1962, playing a big role in each tournament. In both 1958 and 1962, Garrincha was named to the World Cup All-Star team.

Garrincha was particularly impressive in the 1962 World Cup when Brazil was forced to play without Pelé due to an injury. Garrincha won several awards for his efforts in that tournament, including the Golden Ball for being the best player of the tournament and the Golden Boot for most goals scored.

In 1999, Garrincha placed 7th in the FIFA Player of the Century Vote.

Romário de Souza Faria, who typically is referred to as just “Romário,” is a former Brazilian footballer. Nowadays, he works as a politician.

Romário is remembered for his brilliant offense, as he scored over 750 goals in his career. He also won the Golden Boot in 1994 for the most goals scored in the Premier League. Romário is remembered fondly and has received much recognition since his retirement. He was named to the FIFA 100 list of the world’s best footballers of all time.

Romário played at the striker position and was a prolific goal scorer. He was especially dangerous close to the goal, dominating play in the penalty area. At just 5’6”, he was quick and slippery, allowing him to dance around opponents while dribbling the ball.

Who is the best men’s soccer player from Brazil?

Who is the best goalie from Brazil?

Gilmar dos Santos Neves is widely remembered as the greatest Brazilian soccer goalie of all time. Neves is typically referred to as just “Gilmar.” Gilmar won World Cup championships in 1958 and 1962, playing with Pelé and Ronaldo. Gilmar also had loads of success at the club level, including Copa Libertadores and Intercontinental Cup titles in back-to-back years. Gilmar is remembered as a two-time world champion on both the club and international levels of play.

Who is the best women’s soccer player from Brazil?

Marta Vieira da Silva, or just “Marta,” is the greatest women’s footballer from Brazil, and one of the best regardless of gender. Some argue she is the greatest woman ever to play the sport. Marta won the FIFA World Player of the Year an astonishing six times, including five consecutive times from 2006 to 2010. Marta has scored more international goals than any other Brazilian soccer player, male or female. She was also the first footballer to score goals at five different World Cup tournaments.