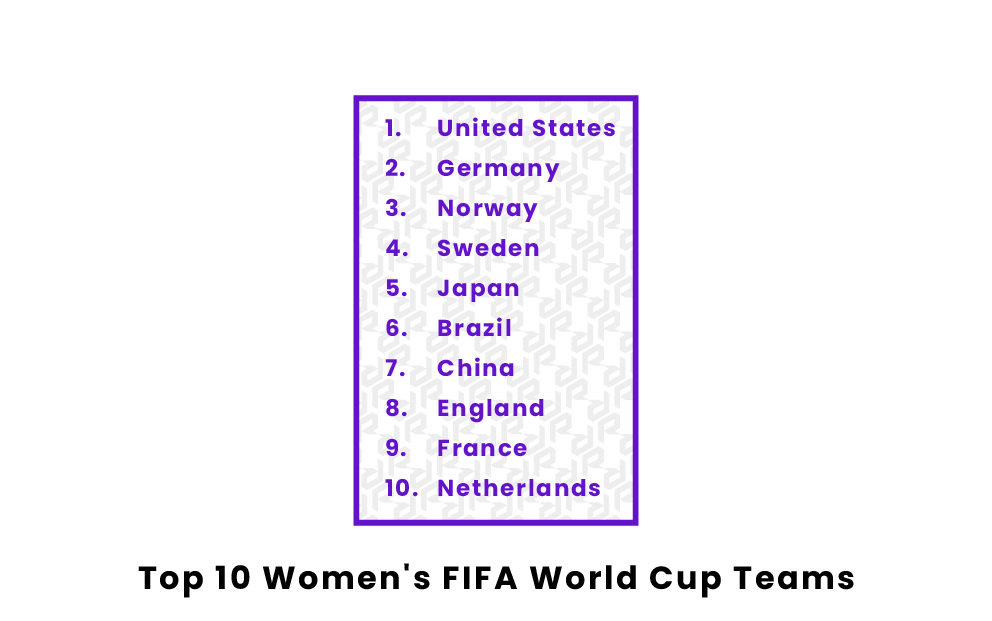 Although the Men’s World Cup began in 1930, the Women’s tournament did not begin until 1991. Since the Women’s World Cup tournament runs on the same four-year cycle as the men’s, there have been eight editions of it to this point. In those eight tournaments, some teams have certainly stood out amongst the rest. The top ten teams are ranked from one to ten below.

Who are the best Women’s World Cup soccer teams of all time?

One of the most dominant teams in all of sport, the United States Women’s soccer team is by far the best team in the history of the Women’s World Cup. They have won four of the eight tournaments, winning their first tournament in 1991 and the others in 1999, 2015, and 2019. The 1999 tournament, in particular, occurred on US soil, so it was extra special for the Americans. Not only have they won four times, but they have come in either second or third in the other four tournaments that they did not win. They are the only team to place top three in all eight World Cups. Overall, they rank first with both 40 total wins and 138 goals scored. As two-time defending champions, we shall see if the Americans can three-peat at the 2023 tournament in Australia/New Zealand.

After the United States, it is pretty clear that Germany is the next best team. They are the only team besides the United States to have won multiple tournaments, as they did so back-to-back in 2003 and 2007. They were the only team to have won back-to-back Women’s World Cups until the United States did so in 2015 and 2019. They had a chance to go for the three-peat on their home soil, as the 2011 tournament was in Germany. Unfortunately for the Germans, they lost in the quarterfinals. The Germans also made the World Cup final in 1995, however, they lost to Norway. In totality, they rank second behind the Americans in total goals scored, with 121, and second in total wins, with 30.

The first team on this list without multiple World Cup titles, Norway comes in third on the list. The Norwegians do have one World Cup to their name, as they captured the second edition of the tournament in neighboring Sweden in 1995. In the final match of that tournament, they defeated the aforementioned German squad by a score of 2-0. This came after Norway was close to winning the first World Cup in 1991, but they were defeated in the final by the United States by a score of 2-1. Norway has yet to make it back to a World Cup final since 1995, but they still rank third all-time in both matches won, with 24, and in goals scored, with 93.

While Sweden has yet to win a World Cup, their overall performance is still good enough to earn them fourth on this list. They were runners-up to Germany in 2003, losing the final match 2-1 in extra time. They’ve also come in third on three occasions: in 1991, 2011, and 2019. In 2011, they were knocked out in the semifinals by eventual champions Japan by a score of 3-1. Only the USA (eight) and Germany (five) have more top-three finishes than Sweden’s four. Taking into account all matches, the Swedes have the fourth-most wins (23) and fourth-most goals scored (71) of all time.

The last team on this list to have won a World Cup title, Japan comes in at number five. Japan was the champions of the 2011 tournament in Germany, defeating the powerhouse that is the United States in the final match in a penalty shootout. They came close to repeating in 2015 in Canada, before they lost to the USA 5-2 in a World Cup final rematch. Outside of these two tournaments, Japan has not had much success at the World Cup. They do not have any other top-four finishes, and in fact, they’ve only won four matches total outside of the 2011 and 2015 tournaments. Nonetheless, their 14 total wins are good enough for eighth all-time, as are their 39 goals scored.

Most consider Brazil to be the best Men’s World Cup team of all time, but the Brazilian Women’s Team checks in at sixth on this list. While they have yet to win a title, their best finish has been second place, which they did so in losing to Germany 2-0 in the 2007 World Cup final. Brazil also has another top-three finish, coming in third place at the 1999 tournament in the United States, losing to the hosts in the semis before defeating Norway in the third-place match. Brazil as a whole has the fifth-most wins (20) and fifth-most goals scored (66) out of all nations.

Another team whose best World Cup finish was second place, China takes the number seven spot on this list. Their runners-up finish came in 1999 to the United States, when they came close to upsetting the Americans on their home turf, holding them scoreless through regulation and extra time. The Americans hung on to win the penalty shootout, however, by a score of 5-4. The Chinese also made the semifinals in the 1995 tournament, however, they eventually finished in fourth place. When taking into account all tournaments, China’s 16 match wins and 53 goals scored rank sixth amongst all competitors.

The first team on our list to not have made a World Cup final, England is the number eight ranked team. The English’s best World Cup finish is third place, which they did at the 2015 World Cup in Canada when they defeated Germany 1-0 in the third-place match. They also made the semis at the following World Cup in 2019, however, they came in fourth place on that occasion when they lost the third-place match to Sweden 2-1. Overall, their 15 match wins and 53 goals scored earns them seventh place on the all-time list in both categories.

Although they have never finished in the top three at a World Cup, France’s overall resume is good enough for ninth on this list. The best they have done overall at a World Cup is fourth place, which they did in 2011. That year, they made the semis but lost to the favored United States squad 3-1 in the semis, and then fell to Sweden 2-1 in the third-place match. When taking all of their appearances into account, their 10 match victories is the ninth-most of all teams, and the 32 goals that they have scored is the eleventh-most.

The final team on this list, the Netherlands earned their spot due to their most recent performance. The Dutch are the defending World Cup runners-up, as they made a great run to their first World Cup final in 2019 in France, however, they were defeated by the United States by a score of 2-0. Time will tell if the Dutch can sustain their success in 2023, as prior to 2019, they only had one match victory in five matches at the World Cup. Despite this, their seven total victories leave them tied for the eleventh-most of any nation, and their 14 goals is good enough for 15th-most of all countries in that category.

While the teams below did not make the cut for the top ten, they still deserve some recognition as honorable mentions. They are listed in alphabetical order.