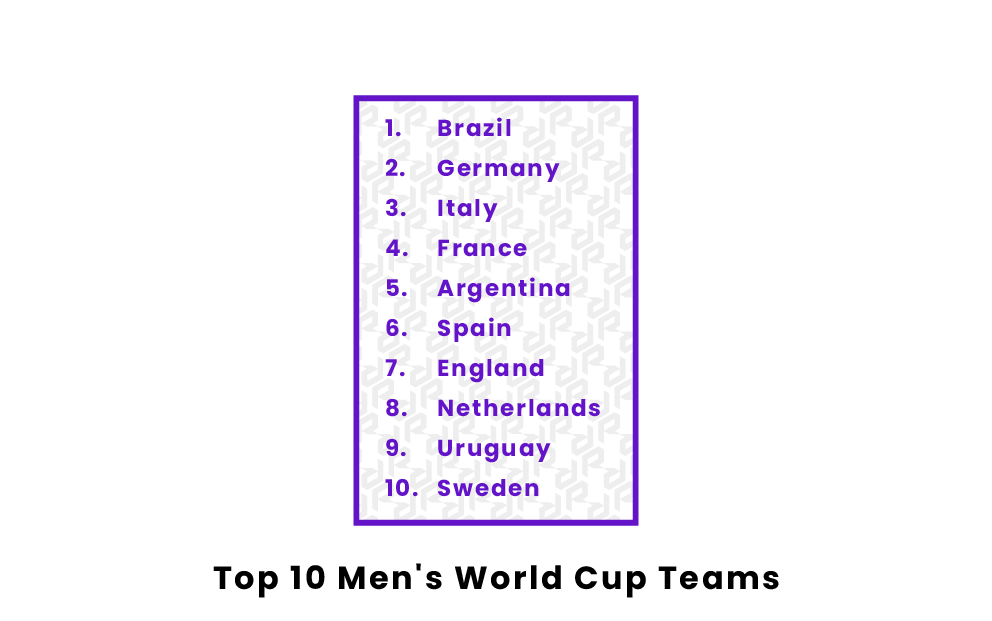 Every four years, the Men’s FIFA World Cup is one of the most-watched sporting events in the world. It brings nations together from across the globe to compete in a highly competitive soccer tournament. Below, some of those nations that have been the most successful at the World Cup are ranked from one to ten.

Who are the Best Men’s World Cup Soccer Teams of All Time?

There is not much question as to who the most successful Men’s World Cup team of all time is. Brazil is the only team to win the event five times, taking home the title in 1958, 1962, 1970, 1994, and 2002. Those first three victories were all in large part thanks to one of the greatest soccer players of all time, Pelé. In fact, Pelé is the only man in history to have won three World Cups. Additionally for Brazil, they have scored the most goals of any nation with 229, won the most matches with 73 victories, and are the only team to participate in all 21 World Cups. Outside of those five victories, Brazil has two runner-up finishes and two third-place finishes, further cementing their legacy as the greatest Men’s World Cup team ever.

While Brazil stands out as the greatest World Cup team, Germany is the one team that is close to challenging them at the top. Germany has taken home the trophy four times in 1954, 1974, 1990, and 2014. The 1974 title was extra special for the country, as it came on home soil in Germany. One notable player who was a member of the most recent championship team in 2014 is Miroslav Klose. Klose holds the record for most goals scored by an individual at the World Cup with sixteen. As for Germany as a whole, they hold the record for most appearances in a World Cup final (eight) and most top-three finishes (twelve). They were runners-up in 1966, 1982, 1986, and 2002 and finished in third place in 1930, 1970, 2006, and 2010. Their 226 goals scored and 67 match victories are both second to Brazil.

Another nation with four World Cup victories, Italy comes in at number three on the list. Italy won the second and third editions of the tournament in 1934 and 1938, and they also managed to win in 1982 and 2006. Like the Germans in 1974, Italy was victorious in their home country in 1934. The only other team to win back-to-back World Cups, along with the Italians, are the aforementioned Brazilians, who did so in 1958 and 1962. In their 83 matches played at the World Cup, Italy has won 45 times and scored 128 goals. Along with their four victories, Italy has finished in second place twice (1970 and 1994) and third place once (1990).

Since the top three nations on this list have won thirteen of the 21 tournaments, it becomes a little more difficult to differentiate the rest of these teams. With that being said, France comes in at number four. France is the defending World Cup champion, and in addition to their 2018 title, they also won in 1998. Although they did not win the title in 1958, Frenchman Just Fontaine scored an individual tournament record thirteen goals in just six matches. For comparison, the aforementioned Miroslav Klose scored sixteen goals in 24 matches. Those thirteen goals are good for fourth all time in career World Cup goals. Getting back to France as a whole, they have won 33 of their 66 matches played, scored 120 goals total, have one second-place finish (2006), and two third-place finishes (1958 and 1986).

A team with a similar resume to France, Argentina checks in at number five on the list. Like France, Argentina has two titles, winning the World Cup in 1978 and 1986 behind all time great Diego Maradona. Maradona’s 21 World Cup matches played rank him fourth on the all time list. As for Argentina, their 137 World Cup goals scored actually ranks them third all time, behind only Brazil and Germany. Argentina scored those 137 goals in 81 matches played, and they were victorious in 43 of those games. In addition to those two victories, Argentina has finished in second place three times in 1930, 1990, and 2014.

The first team to not have won multiple World Cups, Spain is the number six ranked team on this list. Spain’s lone World Cup tournament title came in 2010 in South Africa. Overall, in their 63 matches played, Spain has come away with 30 victories and scored 99 goals. Interestingly, Spain has been quite adept at drawing penalty kicks in their matches, as they hold the record for most penalties awarded (eighteen) and penalties scored (fifteen). Unfortunately, despite having some great talent over the years, Spain have never had a top-three finish outside of the 2010 championship. They have had some heartbreaks over the years, being eliminated in a penalty shoot-out on three separate occasions, tied for the most of any nation.

Just like Spain, England has had some great individual talents and great teams over the years, yet they have only won one World Cup. That one victory is still good enough to help them be the number seven team. England’s one title was a special victory, as it took place at the 1966 World Cup hosted by the English. Overall, England has 29 victories and 91 goals scored at the World Cup in their 69 matches. Again similarly to Spain, England has not finished in the top three at any other World Cup outside of their lone title. Their three penalty shoot-out eliminations are tied with the Spanish for the most all-time.

The first team on our list to not have any titles, the Netherlands still comes in as the eighth-ranked team. While they have never won the World Cup, the Dutch have come in second on three occasions (1974, 1978, 2010) and finished in third place in 2014. They may have more success in the future, but they have often struggled to qualify for the tournament. The Netherlands has only appeared in ten of the 21 tournaments, the fewest of any team on this list. When they do make the field, however, they often have success. In their 50 matches, they have 27 victories and have scored 86 goals. The Dutch have managed to qualify for the 2022 edition of the World Cup in Qatar, so it remains to be seen if they can add to their success.

Although Uruguay has won two World Cups, they only come in at number nine. Uruguay won the inaugural World Cup in 1930 (which took place in Uruguay) and again won in 1950. These two World Cups had the two smallest fields out of the 21 tournaments, with only thirteen participants in each event. Thus, Uruguay did not quite face the level of competition when they won that some of the other teams on this list did. Nonetheless, two titles are still an impressive feat. Overall, in their 56 World Cup matches, Uruguay has scored 87 times and been victorious 24 times. Outside of those two titles, they have never placed in the top three.

Just like the Netherlands, Sweden has yet to win a World Cup. Despite this, they are the final team on this list. They were the runners-up at the 1958 tournament and finished in third place in 1950 and 1994. Their second-place finish did come in place in front of their home fans, as the 1958 World Cup was hosted by the Swedes. In total, Sweden has nineteen World Cup victories and 80 goals scored in their 51 matches played. Unfortunately, Sweden failed to qualify for the 2022 World Cup, so they will have to wait until at least 2026 to add to their World Cup history.

While the countries below did not quite make the cut for the top ten teams, they still deserve some recognition as honorable mentions. They are listed in alphabetical order.