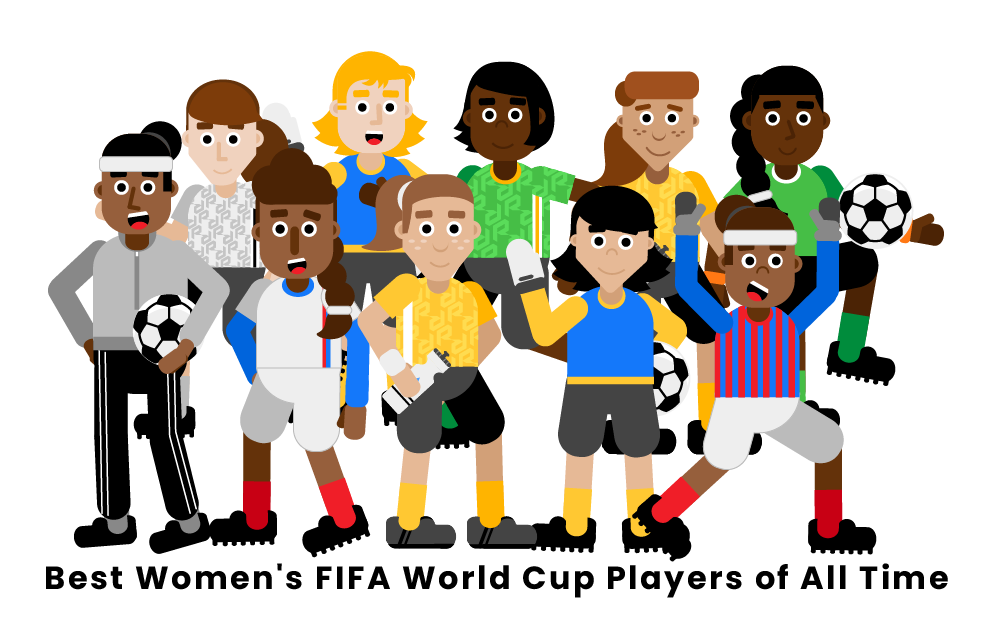 Since 1991, international women’s soccer teams have competed on the world stage in the FIFA Women’s World Cup. Every four years, the top women players from each qualifying country compete, showing off their abilities. While the Women’s FIFA World Cup has demonstrated the incredible talent of many players in the sport, ten women have stood out from the competition, marking their names in soccer history.

What are the best women's FIFA World Cup Players?

Brazilian Women’s international player Marta da Silva is the most successful FIFA Women’s World Cup goal scorer in history, scoring 15 goals in the 2015 tournament. Born in 1986, Silva grew up playing soccer in her neighborhood, out skilling all of her competitors. After playing for a large number of Brazilian club teams, Silva settled in the United States, playing for the Orlando Pride. Famously, Silva was named FIFA World Player of the Year six times throughout her career. The Brazilian forward is a legend on and off the pitch and even served as a United Nations Goodwill Ambassador for eight years.

Mia Hamm is a legendary attacking player from the United States. At only 15 years of age, Mia Hamm made history by becoming the youngest US Women’s National Team player ever. From 1987 to 2003, Hamm played for the US national team 276 times, scoring a whopping 158 goals for the team. A role model to many young players, Hamm is one of the most well-known women players in history, having previously had sponsorships with the likes of Nike and Gatorade. Throughout her career, she was named FIFA World Player of the Year two times, drawing the spotlight on the US Women’s International Team.

Born in Frankfurt, Germany, in 1977, Birgit Prinz played many sports growing up. However, her father’s influence led to her pursuing her interest in soccer. Revered as one of Europe’s greatest women soccer players in history, Prinz debuted for the German international team at just 16 years old, scoring in her first appearance. Prinz is known for her exceptional physical abilities and her height on the pitch. From 2003-2005, Prinz was deemed FIFA Player of the Year three times in a row. Additionally, the soccer legend won two World Cups for her nation and three Olympic bronze medals.

Carli Lloyd is a famous United States Women’s International Team midfielder that was born in 1982. Having played soccer from just five years old, Lloyd played for her high school team in New Jersey and later for the Rutgers University women’s team. There, Lloyd perfected her abilities, eventually starting her international career for the US Women’s Under 21 team. During her time with the US National Team, Lloyd helped secure two Olympic gold medals and two World Cup trophies. Among her World Cup successes, Lloyd is a dedicated women’s rights advocate, helping fight for equal pay in women’s soccer.

Hope Solo is arguably the most famous women’s goalkeeper of all time for good reason. The American keeper is a household name across the globe due to her achievements and success with the US National Team. Originally playing as a forward in highschool, Hope Solo saw her main success when she switched positions to goalkeeper in college. Since then, Solo has started for the US National Team, preventing opponents’ goals throughout FIFA World Cups and Olympic matches. Recognized for maintaining the most shutouts for the US Women’s National Team, Solo is a legendary goalie that helped win two Women’s World Cups.

Born in 1978, Homare Sawa was a Japanese soccer player who served as a midfielder and the captain of the Japanese Women’s International Team. Sawa had a remarkable career, helping Japan win the 2011 Women’s World Cup and the silver medal in the 2012 Olympics. Sawa is often recognized as Japan’s greatest women’s soccer player in history and had a successful club career in both the United States and Japan. Among her list of achievements, Sawa was notably named the 2011 FIFA Women’s Player of the Year and was inducted into the Asian Football Hall of Fame in 2014.

Born in China in 1973, Sun Wen is a women's soccer legend. Sun Wen began playing soccer at ten years old. Just six years later, the star began her professional career in 1986 in Shanghai. From just 17 years old, Wen ignited her international career with China, going on to score seven goals in the 1999 Women’s World Cup and receive the FIFA Golden Boot award. The forward is viewed by many as the greatest Chinese women player of all time, winning the Asian Cup with her team five times. While the Chinese Women’s Team has not won a world cup, Wen’s individual performance has demonstrated her remarkable talent on the international stage.

Abby Wambach is another household name in the United States due to her legendary Women’s National Team career. Throughout her childhood, Wambach played with both boys and girls, honing her abilities. Wambach played for the University of Florida before being called up to the US Women’s National Team and securing a position in the Washington Freedom’s lineup. A leading goalscorer, the forward helped the US Women’s National Team win two Olympic gold medals and one World Cup in 2015. Following her massively successful soccer career, Wambach became a successful author, releasing her book Forward. Not only is Wambach a successful World Cup forward, but she is also an iconic figure in women’s sports and US pop culture.

Nadine Angerer was a famous goalkeeper born in West Germany in 1978. Angerer grew up playing as a forward, though she found her success after transitioning to a goalkeeper. After playing for multiple German clubs, Angerer made her German international team debut at only 17 years of age. She won two World Cups, one as a reserve in 2003 and one as the starting keeper in 2007. Angerer was the FIFA World Player of the Year in 2013. After retiring from professional goalkeeping, Angerer moved on to a coaching role with the Portland Thorns.

Born in 1983, Christine Sinclair has been the starting forward for the Canada Women’s International Team for over 20 years. Throughout her career, Sinclair has scored a whopping 190 international goals, a number most professional players can only dream of. Due to her longevity in the sport, and maintaining a strong performance at the top level, she is considered one of the greatest women players of all time. While Sinclair has not won a FIFA World Cup, she was the starting forward for Canada when they won one gold and two bronze Olympic medals. Furthermore, Sinclair has participated in six World Cups, a number that only nine other female players have reached. Sinclair is expecting to continue her success in the upcoming 2023 FIFA World Cup.

Who is the best women’s FIFA World Cup Player in History?

The best women’s FIFA World Cup Player in history is Marta da Silva. A legendary forward, the Brazilian international has been awarded the FIFA World Player of the Year six times. Furthermore, Marta da Silva has been recognized as the all-time top Women’s World Cup scorer since the beginning of the tournament in 1991. Silva is idolized in the soccer world due to her achievements on the pitch, as well as off the pitch, serving as a United Nations Goodwill Ambassador for eight years.

Who is the best women’s soccer player?

The best women’s soccer player is Marta da Silva. Silva holds the record for the most goals scored in the FIFA Women’s World Cup. Additionally, Silva has been named the FIFA World Player of the Year six times throughout her career playing as a forward for the Brazilian Women’s National Team.