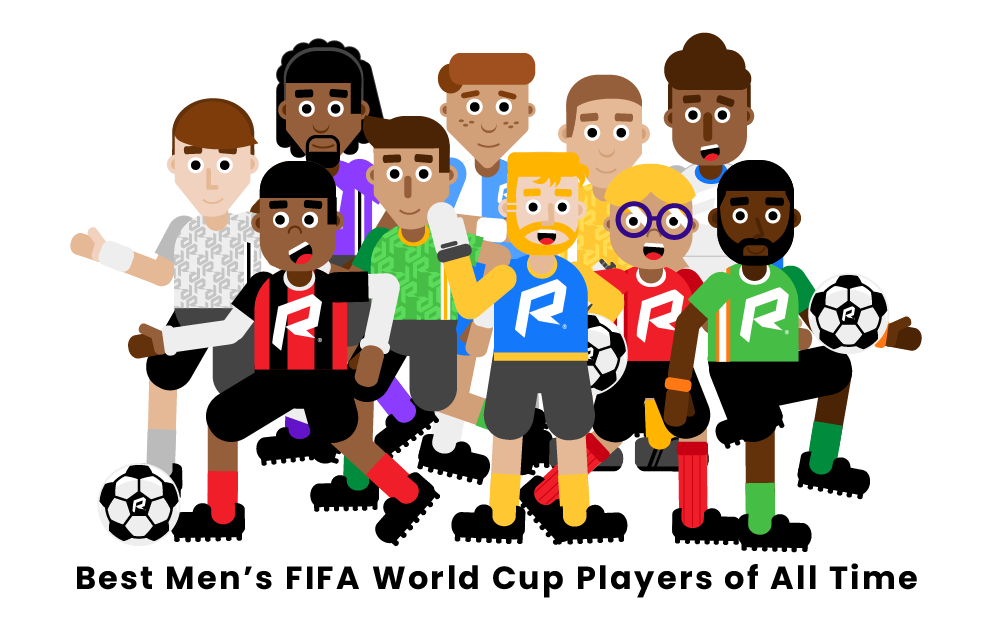 Every four years, the men’s FIFA World Cup attracts billions of viewers from all over the world. In fact, the most recent World Cup in 2018 was estimated to have close to 3.3 billion viewers tuning in worldwide. These fans certainly tune in to see their favorite teams, but they also want to watch their favorite players. Over the years, these individuals have had some incredible performances, and the ten greatest are listed below.

Who are the Best Men’s FIFA World Cup Players of All Time?

One of the greatest footballers ever, Pele also takes the claim as the greatest men’s World Cup player of all time. Pele’s combination of team success and individual success earned him the top spot. Speaking of his team, Brazil won three World Cups with Pele as their star in 1958, 1962, and 1970. Pele is the only player in World Cup history to win the event three times. Moreover, while he was injured in 1962 and only played in two matches, he was instrumental in the other two victories, scoring six times in 1958 and four times in 1970. Additionally, he was awarded the Golden Ball Award at the 1970 World Cup as the tournament's most outstanding player. While he did not win the award in 1970, as the award was officially instituted in 1982, he has been retroactively named the winner of the award by FIFA. Overall, in his fourteen World Cup matches, Pele scored twelve goals, good enough for fifth on the all-time list.

The first of five German players on this list, Miroslav Klose, comes in at number two. Klose holds the record for most goals scored at the World Cup by a male player, scoring 16 times in his 24 matches played. In 2006, Klose won the Golden Boot Award, which is awarded to the player with the most goals at the tournament by scoring five times. As for Germany’s success with Klose, he appeared in four World Cups with the team, and they finished no lower than third on each occasion. They were runners-up in 2002, came in third in 2006 and 2010, and Klose’s career culminated with the 2014 World Cup victory, his final appearance at the event. While Klose was at the end of his career, he still managed to score twice and help Germany win the title.

Ronaldo, another legendary Brazilian soccer player, takes the number three spot on this list. Ronaldo was on the Brazil roster for the 1994, 1998, 2002, and 2006 World Cups. Brazil was victorious in 1992 and 2002, although Ronaldo did not see any action in 1994 due to his inexperience compared to the other players on the team. In 1998, Ronaldo helped lead Brazil to a runner-up finish, and his outstanding play was recognized as he won the 1998 Golden Ball Award. In 2002, Ronaldo helped lead Brazil to their fifth World Cup title, and he won the Golden Boot award along the way, scoring eight times in seven matches. Overall, Ronaldo’s 15 goals rank him second on the all-time list behind Klose.

The first player on this list to only play in two World Cups, Gerd Müller takes the number four spot on this list. Müller was a member of Germany’s 1970 and 1974 World Cup teams, and each one was memorable for him. In 1970, he won the Golden Boot Award by scoring ten times to lead all goal scorers. In 1974, he scored a mere four goals, but that was just fine with him, as Germany captured the World Cup title for the second time. On the all-time list, Müller’s 14 goals are good enough for third place behind Ronaldo and Klose.

A teammate of Müller in 1970 and 1974, Franz Beckenbauer takes the number five spot on this list. The only player on this list who was not a prolific goal scorer, Beckenbauer claimed a spot on this list due to his leadership and defensive prowess. He did manage to score five goals in his eighteen matches played, four of which came in 1966 when he was playing midfield. In 1970 and 1974, he played defense, and his leadership from the back earned him the title of captain for the duration of the 1974 tournament. While Müller got a lot of the headlines for scoring the goals, Beckenbauer was the unsung hero who always made sure the team was doing what it needed to do in order to win the title in 1974.

The player who most often challenges Pele for the greatest player of all-time distinction, Diego Maradona, checks in at number six on our list. Maradona would likely have been higher on this list had he scored a few more goals, and Argentina had had a little more success at the World Cup. Nonetheless, Maradona did manage to score eight times in 21 matches played, five of which came in his most impressive showing in 1986. That year, serving as the team captain, Maradona led Argentina to their second and, to this date, final World Cup title, and he was awarded the Golden Ball Award in recognition of this great feat.

One of Miroslav Klose’s best teammates, Thomas Müller ranks seventh on this all-time list. Müller played in the World Cup with Germany in 2010, 2014, and 2018. While he was more of a reserve and did not play much in 2018, he was a key player for the Germans in 2010 and 2014. In 2010, Müller’s performance both helped Germany to a third-place finish and earned him the award for Best Young Player, an award that has been given out since 2006 to the best player under twenty-one at the tournament. Furthermore, not only was he the Most Outstanding Young Player, but he also won the Golden Boot Award for his five goals scored. Müller would score the same number of goals four years later, and while it was not enough for the Golden Boot, Müller was alright with that, as he and Germany were World Cup champions for the fourth time.

The first and only Spanish player to make this list, David Villa comes in at number eight. On the all-time goals list, Villa’s nine goals scored at the World Cup tie him for 14th all-time. Five of his nine goals came in 2010 when he was the leading goal scorer for Spain en route to their first ever World Cup title. Villa’s performance at the World Cup in 2010 earned him the Bronze Ball Award, given to the player who finishes third in the Golden Ball Award voting. Villa also led Spain with three goals scored in 2006, although they did not make it out of the group stage at that tournament.

The final German player to make the cut, Jürgen Klinsmann, takes the number nine spot. Klinsmann started every game and scored three goals for the German team in 1990, playing a key role in their eventual championship that year. While Germany did not have as much success at the following tournament in 1994, Klinsmann himself improved his own stats, scoring five times to lead the German side. Overall, in his three World Cups and 17 matches played, Klinsmann scored 11 times, good enough for a tie for sixth on the all-time list with Sandor Kocsis of Hungary. After his playing days were done, Klinsmann would go on to manage the United States men’s soccer team from 2011-2016.

While most of the players on this list had more than one tournament, Just Fontaine took the final spot on this list thanks to one incredible performance. In 1958, playing for France, Just Fontaine scored a record 13 times in the six matches he played. Obviously, Fontaine was the Golden Boot Award winner in 1958 with those thirteen goals. Only three players have scored more than 13 goals total in their World Cup careers, and Fontaine did it in one tournament. Despite his incredible performance, France only managed to finish in third place in 1958, but Just Fontaine’s performance will be remembered forever.

Who is the best men’s FIFA World Cup Player in History?

When both individual statistics and team success are taken into account, the best men’s FIFA World Cup player of all time is Pele. Pele is the only player ever to win three World Cups, and his twelve goals scored are good enough for fifth on the all-time list. Other players have scored more goals, but no one had the same impact on winning that Pele did. His heroics will be remembered in Brazil for generations to come.

Who is the best men’s soccer player of all time?

In addition to his World Cup heroics, Pele’s overall success for club and country earned him the title of greatest men’s soccer player of all time by many critics. At the turn of the century, Pele was named joint player of the twentieth century by FIFA, and his 767 goals scored between club and country rank him fifth all time. Pele’s fellow player of the century, Diego Maradona, certainly has a case, but Pele has the slight edge for most people.