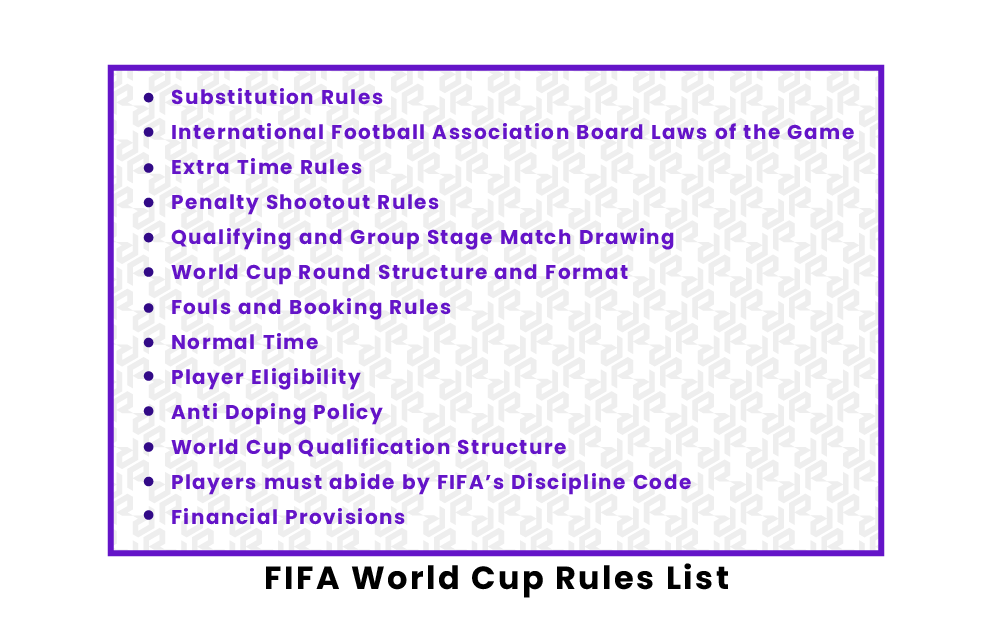 The FIFA World Cup is the largest soccer competition in the world. Since 1930, international teams have been competing in the tournament every four years. The FIFA World Cup has many different rules. Some are normal rules included in every professional soccer game, while others are specific to the World Cup. Read below to learn about the FIFA World Cup rules:

What are the Rules of the FIFA World Cup?

Laws of the Game

Every match throughout the FIFA World Cup is played under the general rules set by the International Football Association Board’s Laws of the Game. The original laws of the game can trace their roots to the 1860s in England, with the Football Association’s original rule set. These laws have been adapted and revised over the decades and continue to change.

The Laws of the Game outline the general rules and format of a professional soccer game. These laws include fundamental rules such as goals, handballs, offsides, and fouls. Additionally, the Laws of the Game dictate the duration of each match. According to the laws, each match in the FIFA World Cup will have a standard time of two 45-minute halves, with a 15-minute halftime between them. Following a tie after normal playing time, the teams have a five-minute break before starting two 15-minute overtime halves. If a tie remains after the overtime period, the teams enter a penalty shootout.

Like the majority of other professional sports competitions, the FIFA World Cup maintains a strict anti-doping policy. This is to ensure that each match is fair and that no player has an unfair advantage due to performance-enhancing drugs.

For the FIFA World Cup, FIFA’s general anti-doping policy is a fundamental rule. Players are prohibited from taking performance enhancing-drugs. Furthermore, all athletes can be drug tested at any point throughout the FIFA World Cup, during rest time or off days, as well as on match days. Random drug testing makes it difficult for anyone taking performance enhancing drugs not to get caught.

The FIFA World Cup follows a tournament structure that creates exciting soccer and equal opportunities for each team. The first stage of the tournament is known as the group stage. The 32 competing teams are broken up into groups of four teams. The teams within each group then play each other twice. The top two teams from each group progress to the round of 16, also known as the knockout stage.

The knockout stage serves as the tournament’s quarterfinals. If a team wins its match, it moves on to the semifinals, and eventually the final if they are successful.

To compete in the FIFA World Cup, teams must qualify for the tournament. Since only 32 teams are allowed entry, there are global qualifying games that take place in the year prior to the world cup. To ensure an equal distribution of teams from each continent, each continent is granted a specific amount of slots for teams in the FIFA World Cup. For example, Europe is given 13 slots for its international teams in the World Cup. The top-performing teams from each continent are given slots. At the end, runners-up compete in global head-to-head qualifying rounds to compete for the final few World Cup slots.

FIFA has outlined multiple regulations to ensure that players are eligible to compete in the World Cup. Firstly, players that compete must hold the same nationality as their team’s country. For example, in order to compete for the United States, a player must be a United States citizen. Secondly, countries’ national soccer associations are responsible for ensuring that their players are eligible to compete for their national team. If a soccer association fails to ensure its players’ eligibility, it is subject to penalties. Any disputes that an association has regarding a player’s eligibility are ultimately decided by the FIFA Disciplinary Committee.

To play in the World Cup, players must abide by FIFA’s Discipline Code. World Cup players represent their home nations, as well as the soccer tournament, and are expected to behave well. Players must respect the referees, engage in fair play, behave accordingly, and not take performance-enhancing drugs. Furthermore, players and teams must comply with FIFA’s code of ethics and must maintain an environment free of racism, discrimination, and cheating. Violations of the FIFA Discipline Code are dealt with by FIFA’s Discipline Committee.