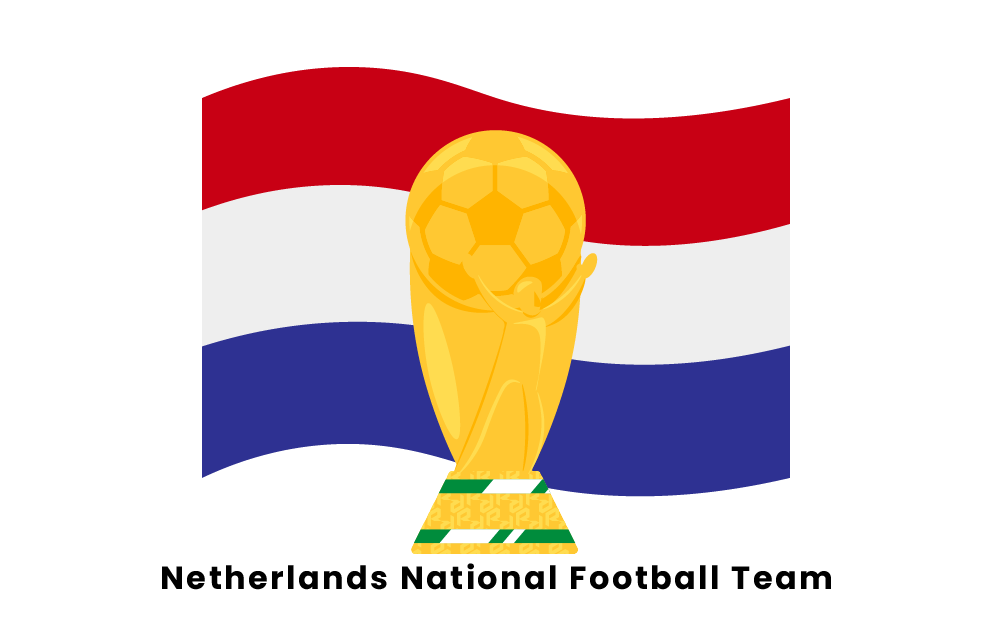 Known by their fans as Oranje or Het Nederlands Elftal, the Netherlands national football team has been competitive throughout its long history. The team has reached second place in the FIFA World Cup three times and has one European Championship title. They have also taken bronze medals three times in the Olympics. The team is run by the Royal Dutch Football Association (KNVB), which is a member of UEFA. The team’s nickname Oranje refers to the House of Orange-Nassau, which is the current reigning house of the Netherlands. Their fan club is called Het Oranje Legioen, or the Orange Legion, and the team plays at four different home stadiums: the Johan Cruyff Arena, De Kuip, Philips Stadion, and De Grolsch Veste.

One of the older international clubs, the Netherlands national football team played its first official match against Belgium in Antwerp in 1905. Their first tournament was the 1908 London Olympics. The Dutch finished third, losing to England and then defeating Sweden in the bronze-medal match. Their first FIFA World Cup appearance was in 1934 when they were eliminated in the opening round by Switzerland.

After a post-war slump, the Netherlands team rose to power in the 1970s, thanks to the tactical “total football” system pioneered by Ajax and implemented by coach Rinus Michels. They finished runners-up in the 1974 and 1978 FIFA World Cups. After another slump in the 80s, the Dutch returned to form, winning the 1988 UEFA European Championship. They have been competitive throughout the 2000s, reaching the semi-final in two UEFA European Championships and third place in the 2014 World Cup. After failing to qualify in 2018, the Netherlands qualified for the 2022 FIFA World Cup, where many hope they may finally take home the trophy.

The main rivalries of the Netherlands national football team are with neighbors Belgium and Germany. Their rivalry with the Belgians is much older than that with the Germans. Known as the Low Countries derby, the fixture between the teams has been held over 125 times since their first unofficial match in 1901. The Dutch hold the edge over the Belgians in total head-to-head wins. However, Belgium has a World Cup title, which the Dutch do not. Although the Dutch have played the Germans since 1910, the rivalry between the teams was ignited in 1974, when the Dutch lost the World Cup final to West Germany. Both teams have been highly-rated in past years, and Germany has a slight edge in head-to-head matches.

Has the Netherlands ever won the World Cup?

The Netherlands has never won the World Cup. However, the national team has been runners-up in three World Cup tournaments: 1974, 1978, and 2010. They also achieved a third-place finish in 2014 in Brazil. The Netherlands’ best finish in a major tournament was their UEFA European Championship title in 1988.

Who is the Netherlands’s best player?

Virgil van Dijk is the Netherlands’ best player. The center-back also plays for Liverpool in the English Premier League and is considered one of the best soccer defenders in the world. Van Dijk is the only defender to ever win UEFA Men’s Player of the Year, and he has finished runner-up for the Best FIFA Men’s Player and the Ballon d’Or. Over 49 international caps, the defender has scored an impressive six goals.

Who is the Netherlands’s all-time scorer?

The Netherlands’ all-time scorer is Robin van Persie, with 50 goals over 102 international appearances. Now an assistant manager at his boyhood club, Feyenoord, van Persie played for the Dutch squad for 12 years. Van Persie was considered one of the best strikers of his generation, known for his positioning and ball control.