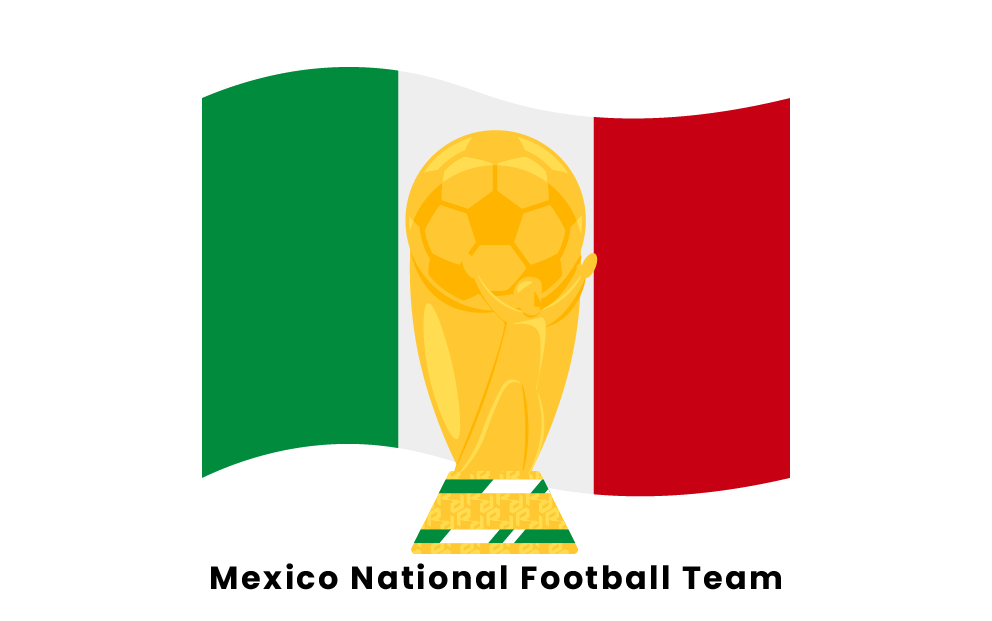 Mexico has a long history on the international stage of soccer, including at the World Cup, which they have hosted two times already. No doubt, with the 2022 World Cup ahead, they will continue to make a name for themselves in the sport. Read on to learn more about Mexico’s national team, their history, and the accolades they have achieved!

While they have not achieved as much success in the FIFA World Cup as some other teams, Mexico is still a distinguished part of the storied World Cup history. As with many countries in Central and South America, soccer is a national pastime in Mexico, and thus, any shot at World Cup glory creates an undeniable fervor in the nation. Mexico has appeared in the World Cup 17 times, and though they have never gone further than the quarter-finals, they are still hunting for glory. Despite not having huge success in the tournament, Mexico is one of only a few nations to host the World Cup twice (the others being Brazil, France, Italy, and Germany), and in 2026, they will become the first-ever country to host the tournament three times when they co-host with Canada and the United States.

The Mexican national team was first founded when soccer began to take hold of the country in the early 20th century. Their first-ever international match was played against Guatemala, and they won the game 3-2. In 1927, the official governing body of soccer in Mexico was founded, and Mexico participated in its first tournament, the 1928 Summer Olympics, one year later, losing to Spain 1-7 in the Round of 16.

Mexico was a key part of the inaugural World Cup, held in Uruguay in 1930, as their match against France was the first-ever World Cup match. Mexico lost 4-1 and was later eliminated in the group stage. After this first World Cup, Mexico did not appear in the tournament again until after World War II. Once they did, however, the team began to experience growing success on various levels of soccer. For example, they won the 1965 CONCACAF Championship and then advanced as far as the quarter-finals in the 1970 World Cup, which they also hosted. They experienced a dip in World Cup fortunes after this, before returning to the quarter-finals in 1986, ironically also in a tournament which they hosted.

In 1990, Mexico was disqualified from the World Cup as a result of the Cachirules Scandal, in which it was learned that the team had intentionally placed four players who were overage on its under-20 team during the 1989 FIFA World Youth Championship. Throughout the 1990s and 2000s, Mexico never made it past the Round of 16 in the World Cup. They have qualified for the 2022 World Cup in Qatar and will also be hosting the 2026 World Cup, along with the United States and Canada.

Mexico’s national soccer kits consist of a green shirt with dark green designs and red highlights, alongside white shorts with red stripes and red socks striped with white and green. These colors represent the tricolor Mexican flag. For their away kits, Mexico typically wears a white shirt with red, swirling designs, dark green shorts with white stripes, and white socks with red and green stripes. Prior to the 1950s, Mexico’s kits were largely maroon, with blue or black shorts. In 2015, they wore all-black kits with red, white, and green highlights. The official supplier of Mexico’s kits is Adidas, who have supplied the team with uniforms since 2007.

Has Mexico ever won the World Cup?

Mexico has never yet won the World Cup, but they have appeared in the tournament 17 times and made it as far as the quarter-finals. Mexico’s two quarter-final appearances came in 1970 and 1986, and in both of those tournaments, Mexico was also the host nation for the World Cup. As they are set to jointly host the 2026 World Cup with the United States and Canada, Mexico will, in that year, become the only country to have hosted the World Cup three times.

How many World Cup appearances has Mexico made?

Mexico has appeared in 17 of the 22 editions of the World Cup. They first appeared in the inaugural 1930 World Cup in Uruguay. Mexico has not appeared in five editions of the World Cup for various reasons. They failed to qualify for the 1934 Italy World Cup, the 1974 Germany World Cup, and the 1982 Spain World Cup. They did qualify for the 1938 France World Cup but withdrew from the tournament. Mexico was banned from competing in the 1990 Italy World Cup as a result of the Cachirules Scandal, in which the team was found to have knowingly added four overage players to its under-20 team.

Who is Mexico’s all-time scorer?

Mexico’s all-time goalscorer is Javier Hernández, also known as Chicarito, who has played for the team from 2009 to the present day. In 109 appearances for the team, Hernández has scored 52 goals. He appeared in three World Cups with Mexico: the 2010, 2014, and 2018 World Cups. However, he is not on Mexico’s roster for the 2022 World Cup. Hernández currently plays for the LA Galaxy of the MLS.