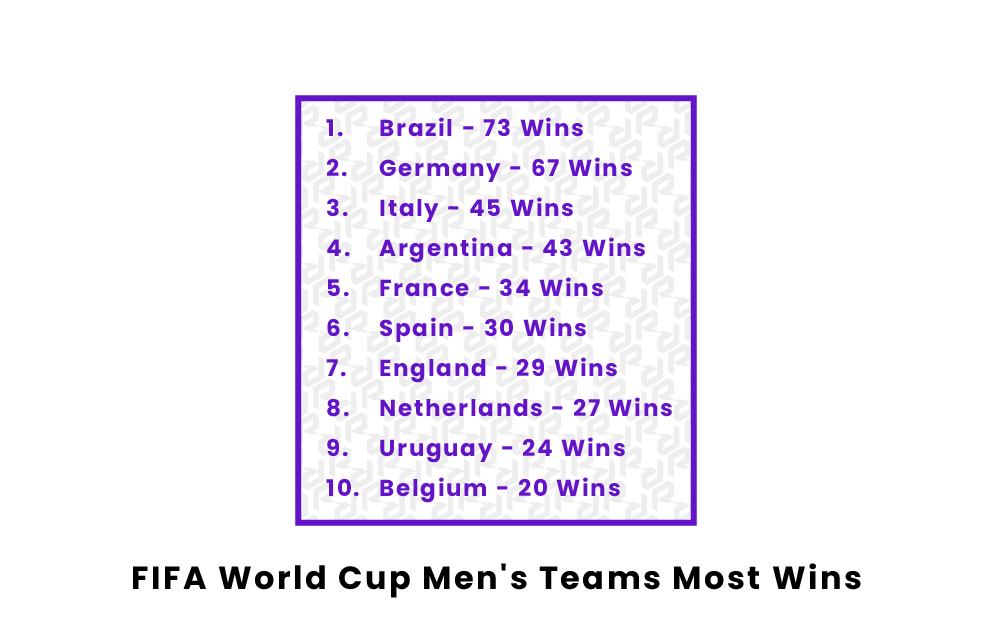 Every four years, the Men’s FIFA World Cup attracts audiences from around the world. In fact, after the Tour de France bike race, it is the most watched sporting event in the world. Throughout its history, some nations have stood out amongst the rest as the best ever. Below, the 10 nations that have won the most matches at the FIFA World Cup are ranked and discussed.

Which Teams Have Won the Most World Cup Matches?

Both in terms of total matches won and overall titles, the most successful nation in the history of the men’s FIFA World Cup is Brazil. Overall, in their 114 matches played, Brazil has won 76, tied 19, and lost just 19. As for their overall titles, Brazil has won the World Cup five times, taking home the title in 1958, 1962, 1970, 1994, and 2002. For the first three of those, all-time great Pelé was one of the leaders of the team. They also have two runners-up finishes (1950, 1998) and two third-place finishes (1938, 1978) to their name. Moreover, Brazil is the only nation to have participated in all 22 World Cups since the first tournament took place in 1930, which has helped them to their place on top of the all-time wins list.

Coming in just behind Brazil, Germany has the second-most match victories in the history of the World Cup. Playing 112 matches, Germany has come out on top 68 times, tied 21 times, and lost 23 times. Along with the second-most match wins, Germany has the second-most World Cup titles, winning the 1954, 1974, 1990, and 2014 tournaments. One statistic that Germany comes out on top in is the most championship match appearances, as in addition to their four titles, they have four runners-up finishes (2002, 1986, 1982, 1966), adding up to eight World Cup finals made. Sticking to the theme of four, the Germans have finished in third place on four occasions (1934, 1970, 2006, 2010) for a total of 12 top-three finishes, which is also the most all-time.

The 2022 World Cup champion, Argentina ranks third on the all-time World Cup wins list. Argentina’s 47 wins have come in 88 matches played, along with 17 draws and 24 losses. When it comes to World Cup titles, Argentina has taken home the big prize on three occasions, in 1978, again in 1986, with all-time great Diego Maradona leading the way, and most recently in 2022, led by Lionel Messi. The Argentinians were also the runners-up at the first World Cup in 1930, and they came up just short again in 1990 and 2014. Unlike the three previous teams, they have never finished in third place at a World Cup.

France comes in at number five on the all-time wins list. Throughout their World Cup history, France has won 39, tied 14, and lost 20 of their 73 matches played. In addition to their 2018 title, France also were World Cup champions in 1998, for two titles overall. In 2006, France made it to the final match before ultimately falling to the aforementioned Italian squad. Moreover, they managed to finish in third place in 1958 and 1986 for five top-three finishes in total, three of which have come at the last six World Cups. The French failed to defend their title at the 2022 World Cup in Qatar, losing in the final to Argentina.

England has just one World Cup title to their name, yet they still have the sixth-most wins out of any nation. The English have 32 victories to their name to go along with 22 draws and 20 defeats for a grand total of 74 matches played. Their lone World Cup title came at the 1966 World Cup, which also happens to be the only World Cup to this date to have taken place on English soil, so it certainly was a special victory for the hosts. In their only other two semi-final appearances (1990, 2018), the English came in fourth place.

Like their English competitors, Spain has won only one World Cup title and they also take the seventh spot in match wins. In 67 World Cup matches, Spain has come away with 31 victories, 17 draws, and 19 defeats. As was just mentioned, Spain has won the World Cup just once, and that was at the 2010 edition of the tournament in South Africa. This is the only instance where Spain has finished in the top three, as their second-best World Cup finish was at the 1950 World Cup in Brazil, where they came in fourth place.

The first of two nations on this list to have never won a World Cup, the Netherlands still have the eighth most World Cup wins of all time. The Dutch have played for 55 total matches, with 30 victories to go against 14 draws and 11 losses. While the Netherlands have never won a World Cup, they do have four top-three finishes to their name, more than teams like Spain and England, who have already appeared on this list. They were the runners-up in 1974, 1978, and 2010 to go along with a third-place finish in 2014.

The eighth and final team to have a World Cup title to their name, Uruguay, comes in at number nine on this list. In their 59 matches, Uruguay has come out on top 25 times, drawn 13 times, and lost 21 times. When it comes to their titles won, Uruguay won two of the first four World Cups. They took home the first tournament on home soil in 1930 and won the first post-World War II edition of the event in 1950. Unfortunately for the Uruguayans, they have not had a lot of success since 1950, as they have no top-three finishes, although they did come in fourth place in 1954, 1970, and 2010.

Joining the Netherlands as the only two teams with no World Cup titles, Belgium takes the final spot. Out of the 51 matches they have played at the World Cup, Belgium has come away with the win 21 times, tied ten times, and lost 20 times. Prior to 2018, Belgium had never finished in the top three at a World Cup, and they had come in fourth place on just one occasion in 1986. That all changed in Russia in 2018, as the Belgians claimed their first top-three finish by winning the third-place match against England.

What country has the most Men’s World Cup wins?

The country with the most match victories at the World Cup is Brazil. In their 109 matches, Brazil has a grand total of 76 victories. Brazil also has the most World Cup titles of any country, winning the tournament five times in 1958, 1962, 1970, 1994, and 2002. Clearly, both in terms of championships and overall success, Brazil is the best team in the history of the men’s FIFA World Cup.

What men’s player has won the most World Cups?