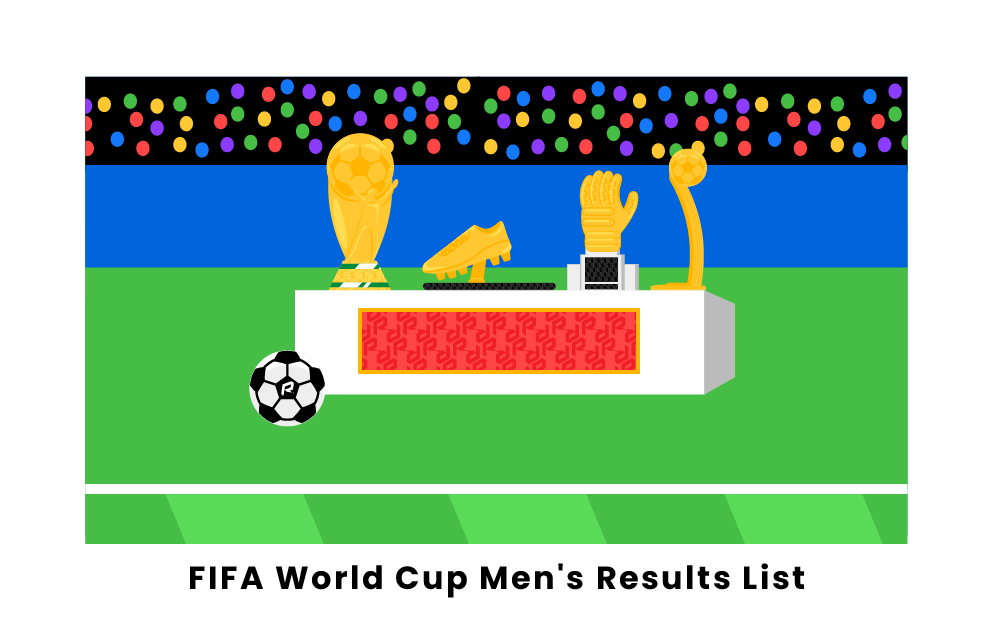 Since 1930, when the tournament was held for the first time in Uruguay, there have been 21 Men’s World Cups. The spectacle is the biggest in all of soccer and draws fans and players from around the world. To learn about which country was victorious in each World Cup, keep reading below.

Below is a list of every World Cup, the host city, the champion, score, and runner-up. In total, there have been 21 men’s World Cups since it started in 1930.

The first-ever World Cup was held in 1930 in Montevideo, the capital city of Uruguay. That location proved to be a good omen for the home team, as Uruguay went all the way to the finals, beating Argentina 4-2 to claim the first World Cup win in history. Uruguay was a football powerhouse early in the century, having also won gold at the 1924 Olympics. They would also make it to the championship match in 1950 when they claimed their second, and at that point most-recent, championship.

Another team that dominated the era was Italy. When the World Cup moved to Italy in 1934, it should have been no surprise that the home club once again reigned victorious after the events in Montevideo. Italy’s 2-1 win over Czechoslovakia was the country’s first, and they came back in 1938 to repeat as champions with a 4-2 defeat of Hungary.

In 1954 West Germany won their first of three championships, but Brazil truly ruled the end of this period. After losing in their home country in 1950, they turned the tables in 1958, going into Sweden and taking down the Swedish national team 5-2. They returned with their eyes on the prize in 1962, winning another World Cup with a 3-1 win over Czechoslovakia.

In 1966, the World Cup moved to England for the first time, and the results may come as no surprise given previous trends. The hosting team made a championship run, capped off by a 4-2 victory over a talented West Germany squad. In 1970, the Brazilian team that had been so good the previous decade came back to win their third World Cup over Italy, and the South American team would also go on to win title number four in 1994, once again over the Italians.

By far, the most successful team of this era was the West Germany club. They captured their second World Cup win in 1974, but the team had plenty more in the tank. They made it back to the championship match in both 1982 and 1986 but lost to Italy and Argentina in back-to-back appearances. However, they were able to avenge at least one of those losses, coming back to the finals in 1990 to take down the Argentinian squad that had bested them four years earlier.

The other two World Cups in this era, in 1978 and 1998, continued to add to a trend that had become almost a guarantee at that point. The 1978 World Cup was hosted in Argentina, and it was the native team that won 3-1 over the Netherlands. Twenty years later, the tournament moved to France, and so, of course, the French national team captured the title with a 3-0 defeat of Brazil.

2002 saw the Brazilian team return to the top spot, claiming their fifth World Cup title with a 2-0 win over Germany. In 2006, Italy and France were tied at the end of stoppage time, and so the championship match went to penalty kicks. Italy converted all five of their kicks to win the game and the World Cup, one of only two titles to be won on penalties. 2010 was one of the most competitive World Cups ever, with many games being tightly contested. That carried into the finals when Spain narrowly defeated the Netherlands 1-0 for their only World Cup win so far. In 2014, after pulling off a shocking 7-2 blowout win over host country Brazil, Germany went on to win the World Cup over Argentina, the second time they had defeated that team in the World Cup finals. The most recent World Cup was played in 2018 in Russia, with the French national team defeating Croatia 4-2 to seize their second World Cup win ever.