How Many World Cups Has Tunisia Won? 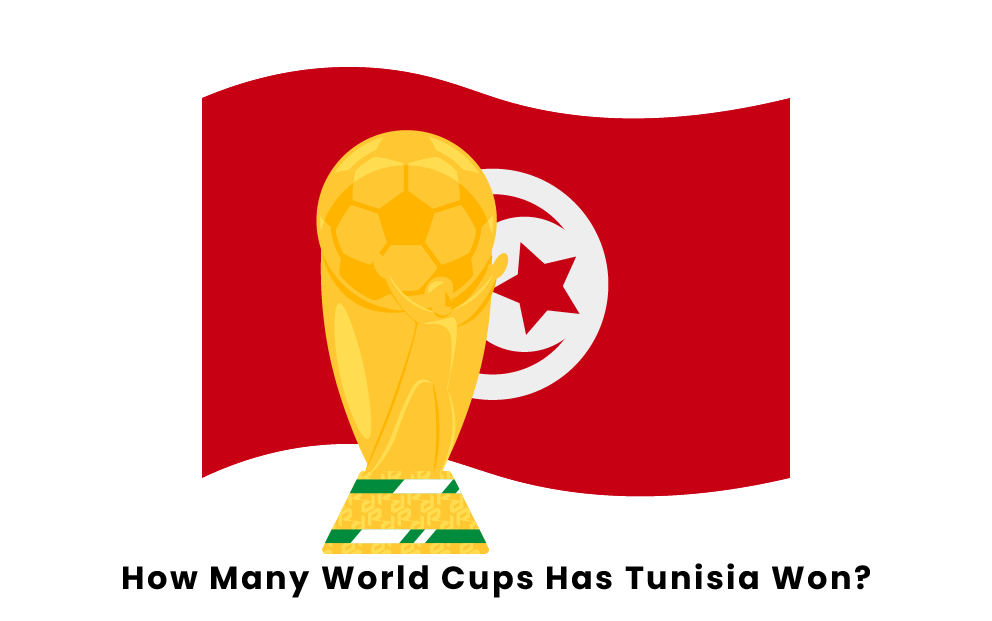 When it comes to the FIFA World Cup, the Tunisian Men’s Soccer Team has appeared in five editions of the tournament. In all five of those instances, however, they failed to advance out of the initial group stage. As for the Women’s Team, they have yet to qualify for a FIFA Women’s World Cup. Read on to learn about the Men’s Teams’ appearances in greater detail.

Tunisia made its first appearance at the World Cup in 1978 in Argentina. Surprisingly, it was also their most successful trip to date. Their initial group consisted of Mexico, Poland, and Germany. In their first-ever match, they scored a win, defeating Mexico 3-1. Their next match was a 1-0 loss to Poland before they tied a powerful German side 0-0 in their final match. The Tunisians just missed out on advancing, needing a win over Germany in their final match to do so. In the big victory over Mexico, Ali Kaabi, Néjib Ghommidh, and Mokhtar Dhouieb put the ball in the back of the net for the Tunisians. It would be another 20 years before they made it back to the World Cup.

At the 1998 edition of the World Cup in France, Tunisia made their second appearance and the first of three straight. Their initial group was made up of England, Columbia, and Romania. They were shut out by the English (2-0) and the Columbians (1-0) before tying Romania 1-1 in their final match.  This was not nearly enough to advance to the knockouts.  Skander Souayah scored the lone goal of the tournament for Tunisia in the Romania match.

The 2002 tournament, which was jointly hosted by Japan and South Korea, was the second of three straight World Cup appearances for Tunisia. Their three guaranteed opponents were Russia, Japan, and Belgium. They managed a 1-1 tie with Belgium in their second match, but both their first and last matches were 2-0 defeats to the Russians and Japanese. Once again, Tunisia went home after the group stage. In the Belgium match, Raouf Bouzaiene scored Tunisia’s lone goal in this edition of the tournament.

At the 2006 World Cup in Germany, Tunisia made their third straight appearance, and for the third straight time, they went home with just one tie and two defeats. Saudi Arabia, Spain, and Ukraine were Tunisia's three opponents.  Their draw came in their first match, 2-2 against the Saudis, before falling to Spain (3-1) and Ukraine (1-0) in their next two matches.  On the positive side, their three goals scored were the most ever scored by Tunisia at a World Cup. Jaouhar Mnari (against Spain), Zied Jaziri (against Saudi Arabia), and Radhi Jaïdi (against Saudi Arabia) scored those three goals.

After failing to make it to the 2010 and 2014 World Cups, Tunisia made their return to the event in 2018 in Russia. Tunisia managed to win a match, although they lost their other two and failed to reach the knockouts. Their three opponents were England, Belgium, and Panama. Their first two matches were defeats at the hands of England (2-1) and Belgium (5-2) before scoring that aforementioned win over Panama 2-1. Thus, Tunisia won their first and most recent World Cup matches, but did not win one in between.

Additionally, their five goals managed to best the 2006 team’s World Cup team record of three. Wahbi Khazri became the first man for Tunisia to score multiple goals in a single tournament, while Ferjani Sassi, Dylan Bronn, and Fakhreddine Ben Youssef scored their other three goals. Tunisia will look to qualify for the knockouts for the first time at the 2022 edition of the tournament in Qatar.

Pages Related to How Many World Cups Has Tunisia Won?