How Many World Cups Has Team USA Won? 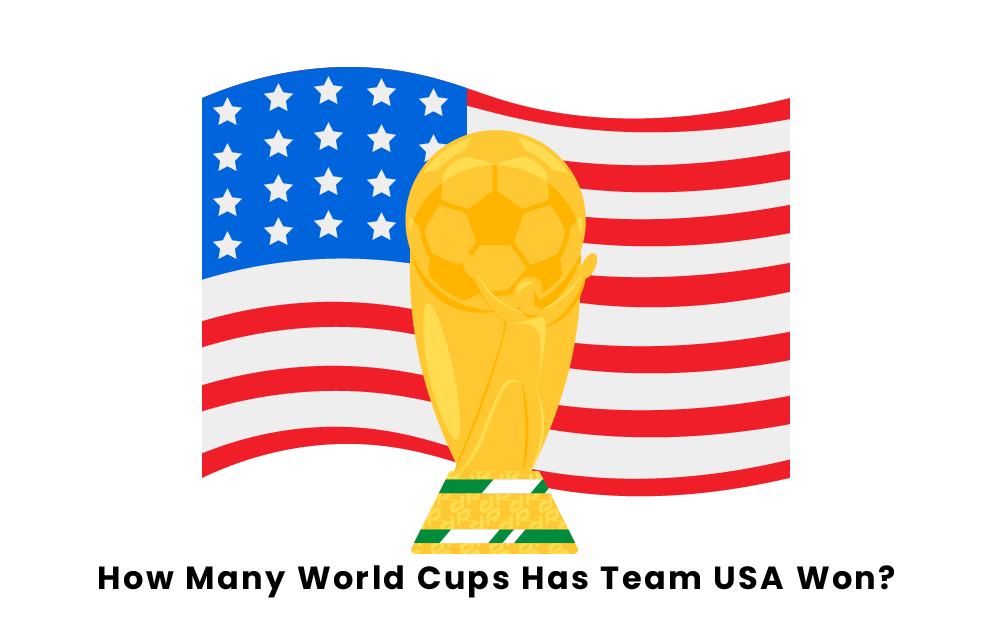 The World Cup is the biggest tournament in the soccer world. Only occurring once every four years, it is a chance for the best soccer stars in every league to come together and compete for a championship title for their native country.

The United States has fielded a men’s and women’s national team in every World Cup they were eligible to enter. Have you ever wondered how many World Cups Team USA has won? Keep reading to find out more about America’s success–and failure–in soccer’s most important contest.

In a wildly diverging set of fortunes, the women’s Team USA has won the World Cup four times, while the men’s team has never finished better than third place.

The stories of the two teams could not be more different. The women’s team has played the maximum number of matches possible in each World Cup, always finishing the tournament in

Team USA won the first Women’s World Cup ever, held in Guangdong, China, in 1991. The team effortlessly swept the first-round tournament, held in Port-au-Prince, Haiti, scoring 34 goals over three matches, with no goals scored against.

After taking down Sweden, Brazil, and Japan in the group stage, Team USA defeated Chinese Taipei in the quarterfinals 7-0. Germany fell in the semifinals 5-2, with Carin Jennings kicking off scoring for the US with an early game hat trick. Then, Team USA won the final 2-1 over Norway. Michelle Akers-Stahl scored both goals; Jennings was awarded the Golden Ball for best player of the tournament.

Team USA again won the championship in 1999, which was held in the US. As a host nation, the team automatically qualified. They beat Denmark, Nigeria, and Korea in the group round.

The team defeated Germany–the current European champion–in the quarterfinal and held Brazil scoreless in the semifinal. The final in Los Angeles against China was scoreless, ending in a shootout victory for the US. All five American shooters scored, while US goalkeeper Briana Scurry was able to block Liu Ying’s shot for the Chinese.

The third championship for Team USA came at the 2015 World Cup in Canada. The team qualified by winning the CONCACAF Women's Gold Cup 2014, defeating Costa Rica 6-0 in the final.

Team USA beat Australia, Sweden, and Nigeria in the group round. During the 1-0 match against the African champion Nigerians, Abby Wambach scored the final goal of her career.

The team took down Colombia in the Round of 16, China in the quarterfinals, and Germany in the semifinals. In the 5-2 victory over Japan in the final, Carli Lloyd scored three first-half goals, while Lauren Holiday and Tobin Heath chipped in one apiece.

The fourth and most recent win for the women’s Team USA was earned at the 2019 World Cup in France. The team qualified by winning the 2018 CONCACAF Women's Gold Cup. Their opponents in the group round were Thailand, Chile, and Sweden, none of whom managed a goal.

Team USA defeated Spain in the Round of 16, France in the quarterfinals, and England in the semifinals, all by a score of 2-1. In the final at the Parc Olympique Lyonnais, Megan Rapinoe and Rose Lavelle each scored a goal while holding the Netherlands scoreless.

Of the ten World Cups that the men’s Team USA has competed in, their best result came at the first one ever held, in Uruguay in 1930. The team beat Belgium, then Paraguay in the group round, thanks to a hat trick by Bert Patenaude.

Team USA was then defeated in the semifinal against Argentina, resulting in a third-place finish in the tournament. American midfielder Raphael Tracy suffered a broken leg after a rough foul, and the Argentines ran away with the game, finishing the Americans off 6-1.

Pages Related to How Many World Cups Has Team USA Won?