How Many World Cups Has South Korea Won? 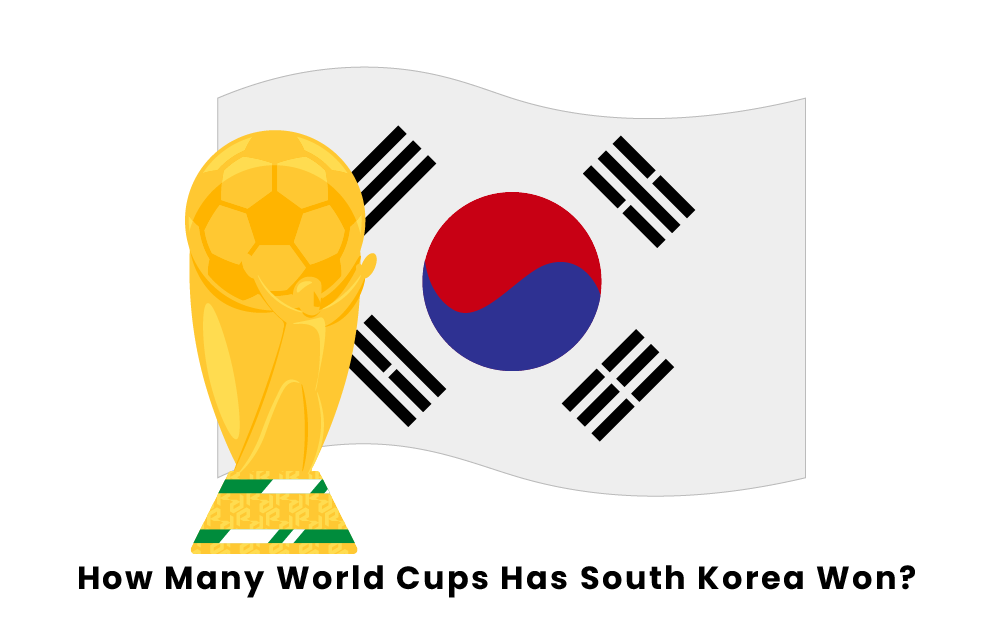 As joint hosts with Japan, South Korean men’s soccer had its most successful results at the 2002 FIFA World Cup. Their initial group consisted of Poland, the United States, and Portugal. They began strong with a 2-0 win over Poland and then tied the United States 1-1 before defeating Portugal 1-0 in the final match. These results were enough to give the Koreans first place in their group and their first trip to the knockouts. Hwang Sun Hong, Yoo Sang Chul, Ahn Jung Hwan, and Park Ji Sung each scored for the South Koreans in these games.

In the Round of 16, South Korea faced the Italian team that would go on to win the 2006 World Cup. On this date, however, it was South Korea who would advance 2-1. Seol Ki Hyeon tied the match up late in the 88th minute, and in extra time, Ahn Jung Hwan scored the game winner at the 117th minute.

In the quarterfinals, the Koreans faced a skilled Spanish team. No one scored in regulation or in extra time, so a penalty shootout was required. Korea won the shootout 5-3, making them eligible for the semi-finals. There, South Korea’s dream of the finals match sadly came to an end as they fell to Germany 1-0. They were also defeated by Turkey 3-2 in the third-place match, giving them a fourth place finish. Although it was a disappointing end, South Korea still had a very successful run as hosts, and they have yet to duplicate this magical run since.

Although the 2010 tournament in South Africa was not quite as successful as the 2002 tournament, South Korea’s men’s team did manage to make the knockouts for the second time. They started in a group with Greece, Argentina, and Nigeria. Their first match was a 2-0 victory over Greece, but then they lost to Argentina 4-1 and tied Nigeria to close out the group stage. This was enough to give them second place and thus their second trip to the knockout stage. Lee Jung Soo led the way with two goals scored during these first three matches, while Park Chuyoung, Park Ji Sung, and Lee Chungyong scored the other three goals.

At this edition of the World Cup, South Korea faced Uruguay in the Round of 16. Chungyoung scored in the 67th minute to tie the match, but Luis Suarez’s two goals for Uruguay were enough to knock out the South Koreans by a final score of 2-1. The men’s team looks to reach the knockouts for the third time at the 2022 World Cup in Qatar.

Of their three appearances at the FIFA Women’s World Cup, South Korea has made one trip to the knockout phase, and it came at the 2015 World Cup in Canada. Their starting group for the competition consisted of Brazil, Costa Rica, and Spain. They fell to Brazil 2-0 in their first match and tied Costa Rica 2-2 in their second match, but then they impressively defeated the highly regarded Spanish team 2-1 in their final match. This victory gave them second place in their group and a trip to the knockout stage. Ji Soyun, Jeon Gaeul, Cho Sohyun, and Kim Sooyun each scored a goal in these three games.

In the Round of 16, the South Koreans were unfortunately overmatched by a talented French squad. France would cruise to an easy 3-0 victory, but this was still the most successful Women’s World Cup to date for South Korea. They will look to qualify for the 2026 tournament in Australia/New Zealand and hopefully move to the knockout stage for the second time.

Pages Related to How Many World Cups Has South Korea Won?