How Many World Cups Has Saudi Arabia Won? 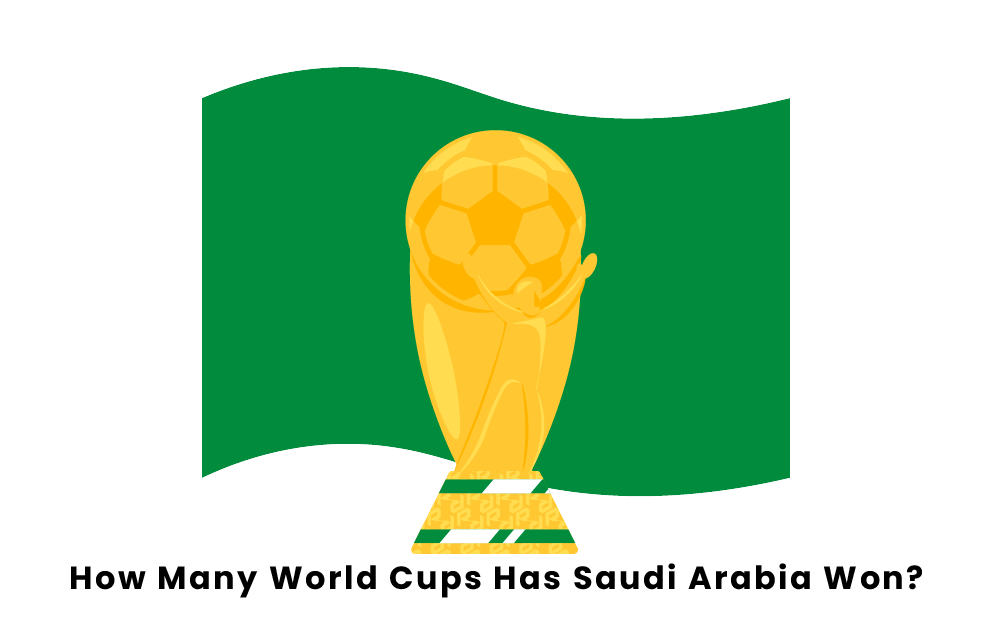 Throughout its history, Saudi Arabia has participated in five men’s FIFA World Cups. They only advanced out of the Group Stage on one of those occasions. On the women’s side, they have yet to make it to a World Cup. Below we will discuss their men’s team’s appearances in greater detail.

The 1994 edition of the World Cup was Saudi Arabia’s first-ever appearance, and it is also their most successful to date. They were initially in a group with the Netherlands, Morocco, and Belgium. The Netherlands defeated them 2-1 in their first-ever match, but they bounced back and defeated Morocco (2-1) and Belgium (1-0) in their next two matches to advance. This allowed them to advance to the knockout round. Fuad Amin scored two of their four goals during these matches, while Sami Al Jaber and Said Al Owairan scored the other two.

The Round of 16 saw the Saudis face off with Sweden. While Fashad Al-Ghesheyan scored his first of the tournament, that was the only positive for them in this match, as Sweden advanced with a 3-1 victory. Nonetheless, it was still a successful debut tournament for Saudi Arabia, and they have yet to duplicate this success since.

Saudi Arabia would go on to make the next three World Cups after 1994, but they never had the same success. At the 1998 tournament in France, they faced off with South Africa, Denmark, and hosts France. They were shut out by Denmark (1-0) and France (4-0) in their first two matches before they managed a 2-2 tie with South Africa in their final match. This was not nearly enough to advance to the knockout rounds. Sami Al-Jaber and Yousuf Al-Thunayan scored both goals in the South Africa match.

For the third straight World Cup, Saudi Arabia were eliminated in the group stage at the 2006 World Cup in Germany. Their three matches were against Tunisia, Ukraine, and Spain. As they did in 1998, the Saudis managed one tie (Tunisia: 2-2) and lost their other two matches (Ukraine: 4-0, and Spain: 1-0). Yasser Al-Qahtani and Sami Al-Jaber scored the two goals for the Saudis against Tunisia.

After missing the 2010 and 2014 World Cups, Saudi Arabia made it to the 2018 edition in Russia. For the first time since that initial trip in 1994, the Saudis would manage to win a match. Unfortunately for them, that was where the celebration ended. They were grouped with hosts Russia, Uruguay, and Egypt. They were shut out by Russia (5-0) and Uruguay (1-0) before getting that aforementioned elusive win against Egypt in their final match, 2-1. Despite this win, it was not enough to advance. Salman Al-Faraj and Salem Al-Dawsari scored against Egypt in the victory. The Saudis will look to advance out of the group stage for the first time in 28 years at the 2022 World Cup in neighboring Qatar later this year.

Pages Related to How Many World Cups Has Saudi Arabia Won?