How Many World Cups Has Morocco Won? 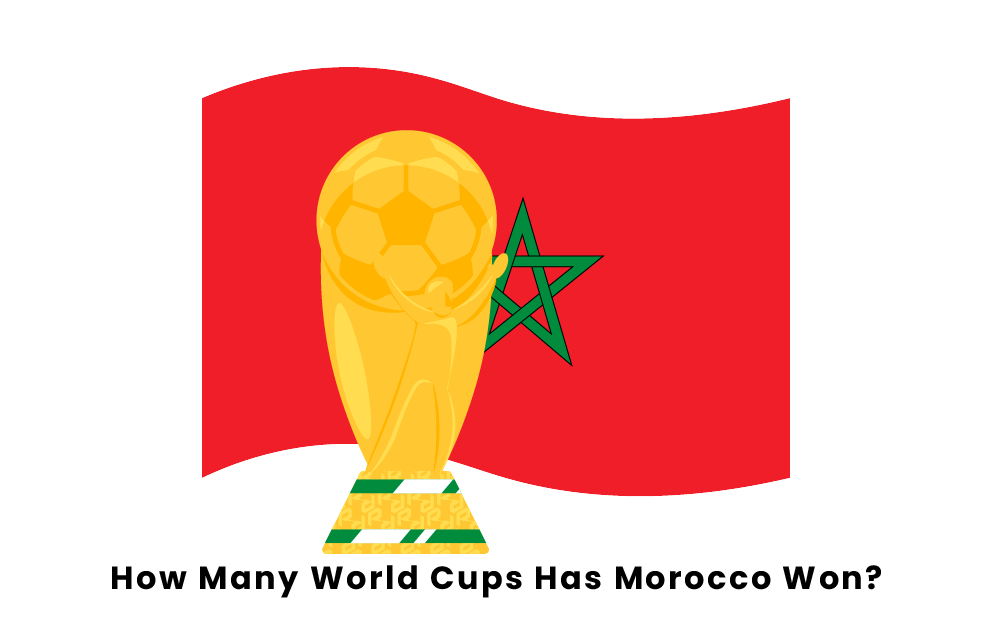 Morocco has qualified for five men’s FIFA World Cups but has never won the tournament. They only advanced out of the knockouts in one of those appearances. As for the women’s team, they have not yet appeared in the World Cup. The remainder of this piece will discuss the men’s team in greater detail.

In 1970, Morocco made their first-ever World Cup appearance in Mexico. Their group consisted of Germany, Peru, and Bulgaria. They would finish with one tie against Bulgaria 1-1, and two defeats to Germany (2-1) and Peru (3-0). While this was not enough to advance, it was still an accomplishment for Morocco to reach the World Cup for the first time. Houmane Jarir and Mahjoub Ghazouani scored the first two World Cup goals in Moroccan history.

Sixteen years after their first appearance, Morocco made their second trip to the World Cup, ironically at a tournament that also took place in Mexico. This time, they were grouped with Portugal, England, and Poland. They started off with a 3-1 win over Portugal before back-to-back 0-0 ties against England and Poland. This was enough for Morocco to advance to the knockouts for the first time. In the Portugal match, Abdelrazzak Khairi scored twice, while Abdelrazzak Krimau scored the third goal. In the Round of 16, Morocco faced off with world power Germany. The match remained scoreless all the way until the 88th minute, when Germany scored the eventual winner and advanced with a 1-0 victory. Despite this loss, it was the most successful tournament to date for Morocco, and they have yet to replicate this success since.

At the 1994 edition of the World Cup in the United States, Morocco made their third appearance. Their group to begin the tournament consisted of Belgium, Saudi Arabia, and the Netherlands. Each match resulted in a one-goal loss for the Moroccans; 1-0 to Belgium, 2-1 to Saudi Arabia, and 2-1 to the Netherlands. While all of their matches were competitive, Morocco failed to reach the knockouts. Hassan Nader and Mohammed Chaouch scored the two goals for Morocco in this tournament.

For the first time in its history, Morocco qualified for back-to-back World Cups when they made it to the 1998 tournament in France. They were grouped with Norway, Brazil, and Scotland. They tied Norway 2-2 in their first match, fell to Brazil 3-0, and defeated Scotland 3-0 in their final match. While this was undoubtedly an improvement from the prior tournament, it was still not enough for Morocco to reach the knockout phase of the tournament. Abdeljalil Hadda and Salaheddine Bassir each scored twice during these matches, while Mustafa Hadji scored the other goal for Morocco in this tournament.

After a 20-year absence, Morocco made it back to the World Cup in 2018 in Russia. Spain, Iran, and Portugal made up their group at this tournament. After consecutive 1-0 losses to Iran and Portugal, Morocco managed a 2-2 tie against Spain in their final match of the group. Khalid Boutaib and Youssef En Nesyri scored the two goals for Morocco in this match. Although this was an impressive tie, it was not nearly enough to advance, and Morocco went home after the group stage for the third straight appearance. They will try to reverse this streak at the 2022 World Cup in Qatar.

Pages Related to How Many World Cups Has Morocco Won?