How Many World Cups Has Japan Won? 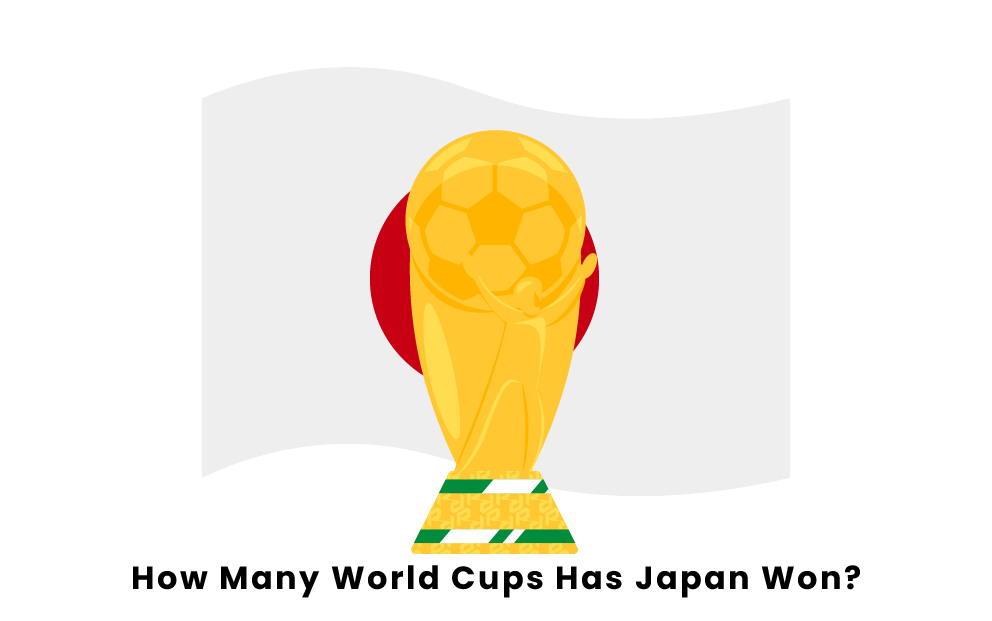 Of the eight FIFA Women’s World Cups that have taken place, Japan has won once and came in second once. The Japanese Women’s Team played the United States in the World Cup Finals in both 2011 (which they won) and 2015 (which they lost).  On the men’s side of the FIFA World Cup, Japan has yet to make a semi-final appearance, and has thus not yet won a finals competition.

Below, we discuss the two major appearances of the Japanese Women’s Team in the FIFA Women’s World Cup.

In 2011, the Japan Women’s Soccer Team won the World Cup in Germany. They began the tournament in a group with England, Mexico, and New Zealand. They defeated New Zealand 2-1 and Mexico 4-0 in their first two matches, before falling to England 2-0 in the final match of the group. Despite this defeat, Japan still did enough to advance to the knockout stage, thanks to their second-place group finish behind England. In these three matches, Japan was led by Homare Sawa, who scored three of their six goals.

In the quarterfinals, Japan was matched up with host-nation Germany. After no one scored in regulation time, extra time was needed. It was then that Karina Maruyama scored in the 107th minute to lead Japan to a 1-0 win. In the semi-finals, Japan fell behind Sweden 1-0 early in the 9th minute before coming back and winning 3-1 thanks to two goals from Nahomi Kawasumi and a goal from Sawa. This brought them to a World Cup showdown with a powerhouse United States squad. The USA took a 1-0 lead in the 68th minute, but Aya Miyama tied the match up in the 80th minute, and the match went to extra time. The United States again took the lead in the 103rd minute, but in the dying minutes of extra time, Sawa scored with only four minutes remaining in the match to send the match to penalties. Japan would go on to win the penalty shootout 3-1 and take their first, and thus far only, World Cup title.

In 2015, Japan would once again make the World Cup final, this time in Canada. Their group to begin the tournament included Switzerland, Cameroon, and Ecuador. They defeated the Swiss 1-0, Cameroon 2-1, and Ecuador 1-0 to easily win their group and advance to the knockouts. Four different players scored the four goals for the Japanese: Aya Miyama, Aya Sameshima, Yuika Sugasawa, and Yuki Nagasato.

Japan began the knockouts by defeating the Netherlands 2-1 in the Round of 16, thanks to goals from Saori Ariyoshi and Mizuho Sakaguchi. Next up was the quarterfinals, where Japan matched up with Australia. The match was scoreless until the late minutes, when Mana Iwabuchi put one into the net in the 86th minute to give Japan a 1-0 win. In the semi-finals, Japan was a bit fortunate to come away with the win over England. Aya Miyama scored in the 32nd minute to put Japan on top, but England tied the match up minutes later. No one scored again until the final moments, when an English own-goal in stoppage time gifted Japan a 2-1 win.

This victory brought Japan to the aforementioned rematch with the United States. Unfortunately for the Japanese, this match did not go nearly as well. The USA amazingly scored four goals in the first fifteen minutes, and Japan could not quite recover. They tried to fight back early in the second half with a goal from Yuki Nagasato, and benefited from a USA own-goal, however, the USA would score again and win easily 5-2. Nonetheless, it was still an amazing run for Japan in these two World Cups.

Pages Related to How Many World Cups Has Japan Won?