How Many World Cups Has Iran Won? 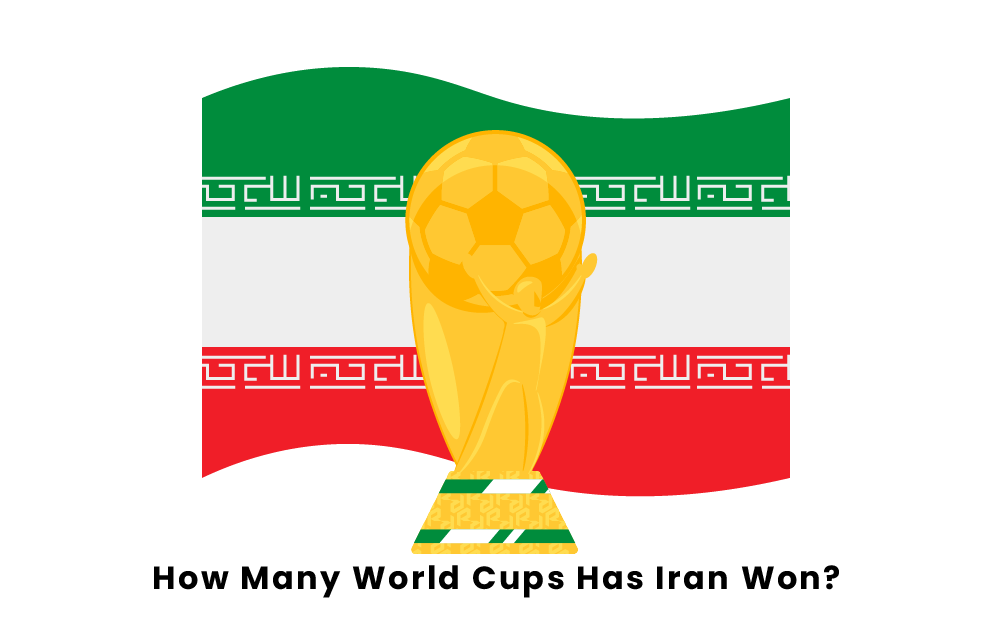 Throughout its history, the Iran men’s national soccer team has qualified for the FIFA World Cup on five occasions but has never won the tournament. In each of those instances, they failed to advance out of the group stage. As for the women’s team, they are yet to qualify for the World Cup. The remainder of this piece will talk about the men’s appearances in greater detail.

At the 1978 World Cup in Argentina, Iran made their first appearance. Unfortunately for them, it was a short-lived trip. Their initial group consisted of the Netherlands, Scotland, and Peru. Their first-ever match was a 3-0 defeat at the hands of the Netherlands. In their next game, Iraj Danayfar scored Iran’s first-ever goal at the World Cup in a 1-1 tie with Scotland. Their final match of the group was a 4-1 defeat to Peru. Hassan Rowshan scored the lone goal for the Iranians in that game. While they did not have a lot of success, it was still an accomplishment for Iran to make it to the World Cup for the first time, and it would be twenty years before they made it back.

At the 1998 edition of the World Cup in France, Iran made their second appearance. They were grouped with Yugoslavia, the United States, and Germany. They fell to Yugoslavia 1-0 in their first match and Germany 2-0 in their final match, but in between, they defeated the United States 2-1 for their first-ever World Cup win. Hamid Estili and Mehdi Mahdavikia each scored for Iran in the win. Despite this victory, Iran was still eliminated in the group stage. This is where Iran’s current run of successfully qualifying for the World Cup began, as they have qualified for four of the six World Cups since 1998.

After missing the 2002 tournament, Iran was back at the World Cup in 2006 in Germany. This time, they faced off with Angola, Mexico, and Portugal. After tying Angola 1-1 in their first match, they were defeated in their next two matches, 3-1 by Mexico and 2-0 by Portugal. Yahya Golmohammadi scored against Mexico, while Sohrab Bakhtiarizadeh scored in the Angola match. Once again, Iran could not make it out of the group stage. While Iran missed the 2010 World Cup, they have been at every tournament since.

Iran was able to make it to the 2014 World Cup in Brazil, but for the third time in four appearances, they left with just one tie and two losses. Those matches came against Nigeria, Argentina, and Bosnia and Herzegovina. The draw came against Nigeria in their first match with a score of 0-0, followed by a 1-0 loss to Argentina and a 3-1 loss to Bosnia and Herzegovina. Reza Ghoochannejhad scored the lone goal of the tournament for the Iranians. Again, they were unable to reach the knockout round, but their next tournament would be their most successful to date.

At the 2018 World Cup in Russia, Iran managed their second-ever win along with a tie, marking the first time in their history that they had less than two losses at a World Cup. Their three opponents were Portugal, Morocco, and Spain. The game against Portugal ended in a draw of 1-1. Next, they secured their second-ever World Cup win against Morocco by a score of 1-0. In their final match, they needed at least another tie to stay in contention for the knockouts, but the Spanish defeated them 1-0. Karim Ansarifard scored the lone goal of the tournament for an Iranian player against Portugal, as the goal in the Morocco match was a Moroccan own goal. While they did not reach the knockouts once again, this was certainly Iran’s most successful trip, and they will look to build on this momentum at the 2022 World Cup in neighboring Qatar.

Pages Related to How Many World Cups Has Iran Won?