How Many World Cups Has Ghana Won? 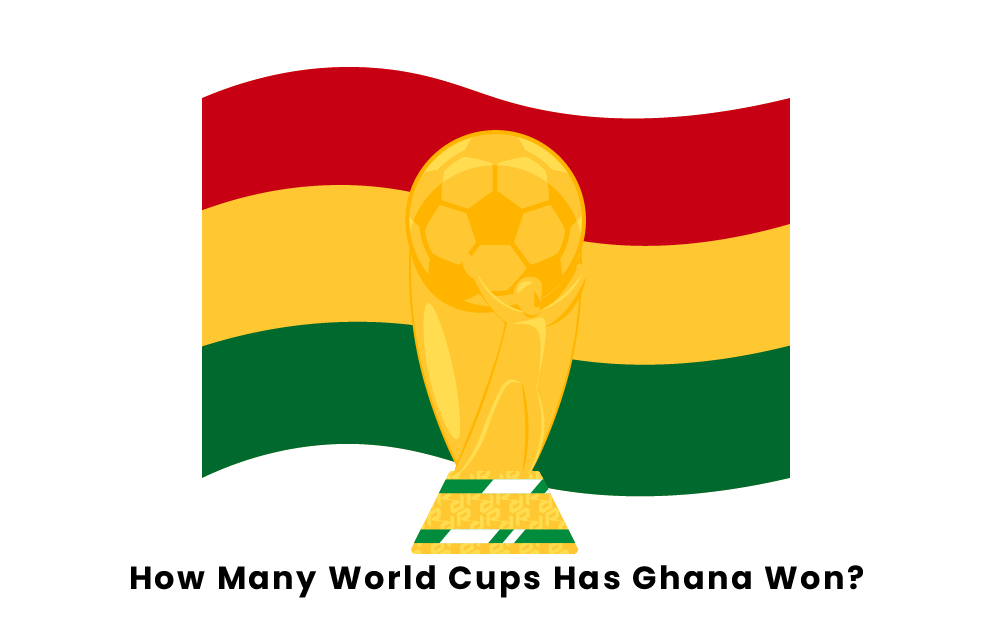 The Ghana men’s soccer team has never won a World Cup title in three tournament appearances. Twice, they have made it to the knockouts. As for the women’s team, they have also made it to three World Cups, but they have never advanced past the group stage. The remainder of this piece will discuss the two best finishes for the men’s team in greater detail.

Making their first FIFA World Cup appearance, Ghana certainly had a successful debut at the 2006 World Cup in Germany. Their initial group consisted of the United States, Italy, and the Czech Republic. Their first-ever match was a 2-0 defeat to Italy, but they rebounded and beat the Czech Republic 2-0 and the USA 2-1 to claim second place in the group and advance to the knockouts. Asamoah Gyan, Sulley Muntari, Haminu Dramani, and Stephen Appiah each scored a goal for Ghana in these four games.

In their first-ever knockout phase match, the Ghana squad was overmatched by a powerful, talented Brazil team. Brazil cruised to an easy 3-0 victory. Despite this disappointing ending, it was still a successful debut for Ghana, and they would build on this success four years later.

Four years after their successful debut, Ghana would top that success at the 2010 World Cup in South Africa. To start off the competition, Ghana was grouped with Serbia, Australia, and Germany. Their first match was a 1-0 victory over Serbia before tying Australia 1-1 and losing to Germany 1-0 in the final group stage match. This was good enough for a second-place finish in their group and a ticket to the knockout phase. Asamoah Gyan scored both of Ghana’s goals during these three games.

In the Round of 16, Ghana faced off with the United States in a rematch of their 2006 group-stage match. Once again, Ghana would get the best of the Americans. Kevin-Prince Boateng would score early in the fourth minute to give Ghana a lead, but Landon Donovan would later tie the match in the 61st minute. No one scored for the remainder of regulation, so extra time was needed. Two minutes into the extra time, Gyan scored his third goal of the tournament, and Ghana would hang on from these for a 2-1 victory. Thus, Ghana advanced into the quarterfinals for the first time.

In the quarterfinals, Ghana faced a talented Uruguay squad. Sulley Muntari scored late in the first half to put Ghana in front, but Uruguay tied the match up early in the second half. Once again, the match was tied up at the end of regulation, and extra time was needed. This time, no one scored in the extra 30 minutes either, and the match went to a penalty shootout. There, Uruguay ultimately advanced by winning the shootout 4-2. Although this was a tough defeat, it was quite a successful tournament for Ghana, and still their most successful tournament to date. Ghana will look to match this success when they make their fourth World Cup appearance in Qatar later this year.

Pages Related to How Many World Cups Has Ghana Won?