How Many World Cups Has Croatia Won? 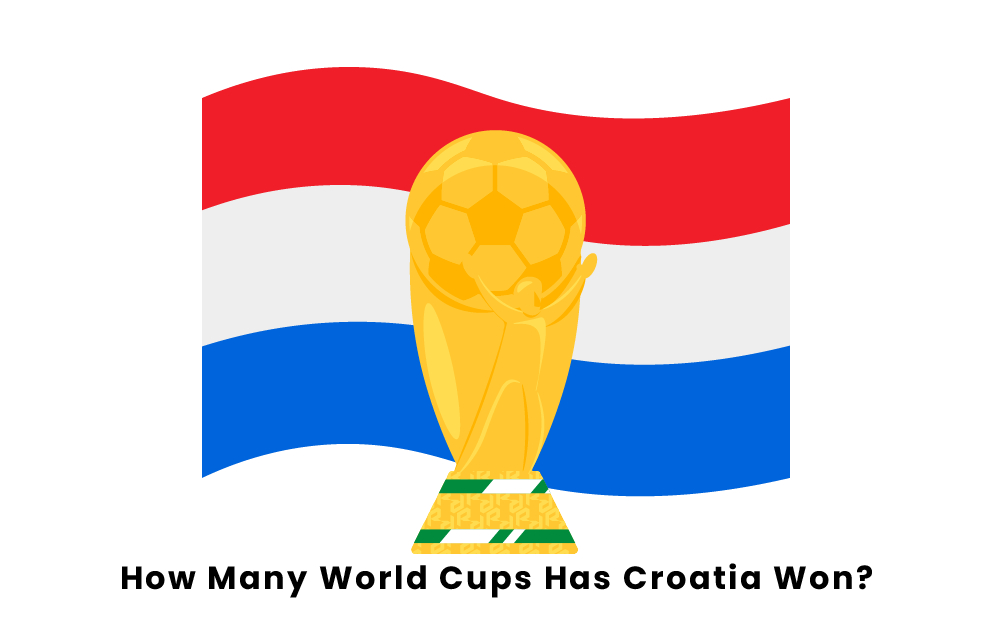 Prior to 1991, Croatia was a part of Yugoslavia and thus not an independent nation. Since they gained their independence in 1991, they made their first World Cup in 1998 and qualified for four of the next five World Cups. In those six total appearances, they have two top-three finishes, so they have had quite a bit of success in a short amount of time. On the women’s side, Croatia has yet to qualify for a World Cup. Continue reading to learn about Croatia’s third-place finish in 1998, and their runner-up finish in 2018.

Just seven years after gaining their independence, Croatia made their first World Cup appearance in France in 1998. Their initial group consisted of Jamaica, Japan, and Argentina. In their first-ever World Cup match, Croatia was victorious against Jamaica 3-1. They then followed that up with a 1-0 win over Japan before falling to powerhouse Argentina 1-0 in the group finale. Their two wins were good enough to get them second place in the group behind Argentina and advance them to the knockout rounds. Davor Suker led Croatia in these group matches, scoring two out of their four goals.

Croatia began the knockouts in the round of sixteen against Romania, and they came out on top 1-0, thanks to a first-half goal from Suker. This led Croatia to a quarterfinal matchup against a strong German team. In a major upset, Croatia not only defeated the Germans, but they won easily 3-0. Goals from Robert Jarni, Goran Vlaovic, and Davor Suker gave the Croatians the win. Thus, in their first World Cup appearance, Croatia was in the semifinals. It was here where the journey came to an end, however, as they fell to host and eventual champions France 2-1. They still had to play the third-place match, and they defeated the Netherlands 2-1 in that game on the strength of goals from Suker and Robert Prosinecki. Clearly, this was a very successful first World Cup for Croatia, and they would not match this run for another twenty years.

In the 2018 men’s FIFA World Cup in Russia, Croatia had its most successful run yet. They started off the tournament by being grouped with Nigeria, Argentina, and Iceland. For the first time in their five appearances, Croatia went undefeated in the group stage. They beat Nigeria 2-0, Argentina 3-0, and Iceland 2-1. With their 3-0 record, Croatia was the group winner and advanced to the knockout stage. The Croatians were led by Luka Modric in these matches, with him scoring two of their seven goals.

Croatia faced off with Switzerland to begin the knockout phase of the tournament. In one of the weirdest matches of the tournament, both teams scored once in the first five minutes, and then no one scored again through regulation time and extra time. Therefore, a penalty shootout was required, and Croatia won the shootout 3-2 to advance to the quarterfinals. In this next round, Croatia faced off with the host nation Russia, and the match was once again tied 1-1 after regulation time, with Andrej Kramaric scoring for Croatia. In extra time, Domagoj Vida scored first to put Croatia on top, but Russia tied it up late, and once again, a penalty shootout was needed. The Croatians won the shootout for the second straight match, this time 4-3.

For the first time since 1998, Croatia was in the World Cup semifinals. This time, they faced off with England, who took an early 1-0 lead in the fifth minute. In the 68th minute, Ivan Perisic tied the match up, and extra time was needed for the third straight game. This time, however, Croatia was victorious without a penalty shootout thanks to a 109th-minute goal from Mario Mandzukic, and they were into the World Cup final for the first time. In the final, they had to go up against France, and as was the case in 1998, the French took down Croatia, defeating them 4-2 to claim the World Cup in 2018. Mandzukic and Perisic scored for the Croatian side, but it was not nearly enough. Despite this, it was a great tournament for Croatia, and we will see if they can ride this momentum to future World Cup success.

Pages Related to How Many World Cups Has Croatia Won?