How Many World Cups Has Cameroon Won? 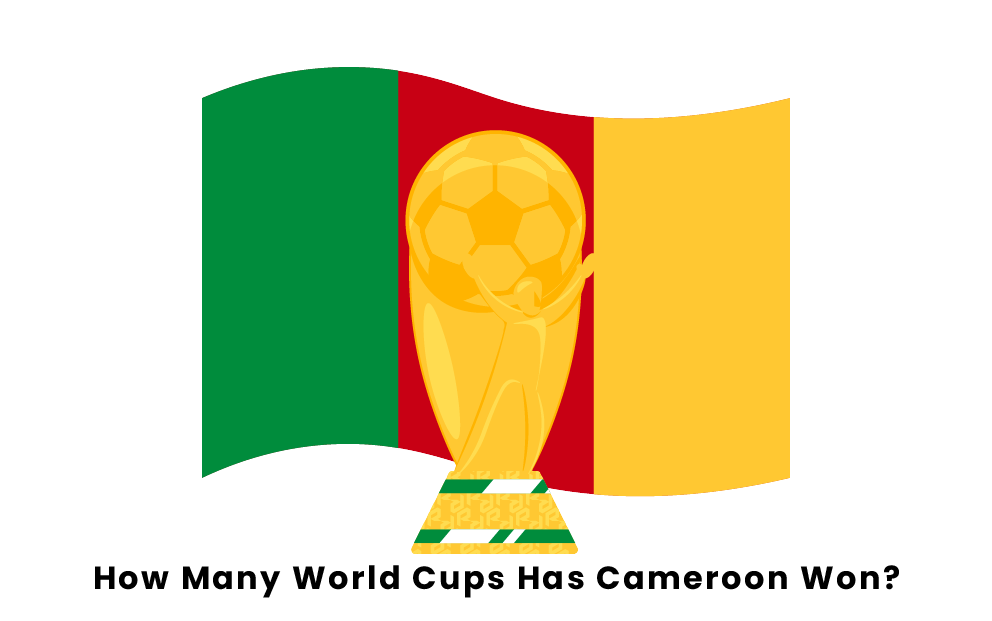 Throughout its history, Cameroon has never won a FIFA World Cup title. The Cameroon men’s soccer team has qualified for six World Cups. Unfortunately for them, they only advanced out of the group stage on one occasion in 1990. As for the women’s team, Cameroon has qualified for two World Cups and, in both instances, advanced to the Round of 16. The remainder of this piece will discuss the three best tournaments for Cameroon in greater detail.

At the 1990 World Cup in Italy, the Cameroon men’s national team had their best finish to date at a World Cup, reaching the quarterfinals. To start off the tournament, Cameroon was grouped with Argentina, Romania, and the Soviet Union. They began the group stage with back-to-back one-goal victories over Argentina (1-0) and Romania (2-1) before they were soundly defeated by the Soviets 4-0 in the final match. Despite this defeat, Cameroon was able to win their group thanks to the six points they had obtained from their two wins. Francois Omam-Biyik scored the lone goal in the Argentina match, while Roger Milla scored both in the Romania match.

In the Round of 16, Cameroon faced off with Columbia. No one scored in regulation time, so extra time was needed. In extra time, Milla scored two goals within two minutes of each other to give Cameroon the lead for good, and while Columbia got one back, Cameroon held on for the 2-1 win. In the quarterfinals, Cameroon had to go against a talented English squad. England scored first, but Emmanual Kunde and Eugene Ekeke scored the next two to give Cameroon a 2-1 lead. England would tie the match up in the 83rd minute, and extra time was needed again. This time, they could not come through, and England scored the only goal of extra time and advanced 3-2. Despite this defeat in the quarterfinals, this is definitely the most successful World Cup team in Cameroon’s history.

At the 2015 FIFA World Cup in Canada, the Cameroon women’s soccer team made their first appearance at the World Cup. In impressive fashion for a first-timer, they would advance to the Round of 16. They were first grouped with Ecuador, Japan, and Switzerland. In their first-ever match, they crushed Ecuador 6-0. After losing to Japan 2-1, they rebounded with a 2-1 victory over Switzerland to secure a spot in the knockout round. Gaelle Enganamouit’s three goals against Ecuador were good enough to lead Cameroon during these three games, followed by Gabrielle Aboudi Onguene (2) and Madeleine Ngono Mani (2). While they would go on to lose to China 1-0 in the Round of 16, it was still a successful debut at the Women’s World Cup for Cameroon.

As they did in 2015, the Cameroon women’s team reached the Round of 16 at the 2019 World Cup in France. This time, they were first matched up with Canada, the Netherlands, and New Zealand. Cameroon was defeated by Canada (1-0) and the Netherlands (3-1) in their first two matches before beating New Zealand 2-1 in their final match. Although they only won one match, they were able to advance to the knockouts as one of the two best third-place finishers. Ajara Nchout scored both goals in the win against New Zealand, while Aboudi Onguene scored in the loss to the Netherlands. This time in the Round of 16, Cameroon was defeated rather easily by England with a final score of 3-0. They will look to advance further at the 2023 World Cup in Australia/New Zealand if they can qualify.

Pages Related to How Many World Cups Has Cameroon Won?