How Many World Cups Has Brazil Won? 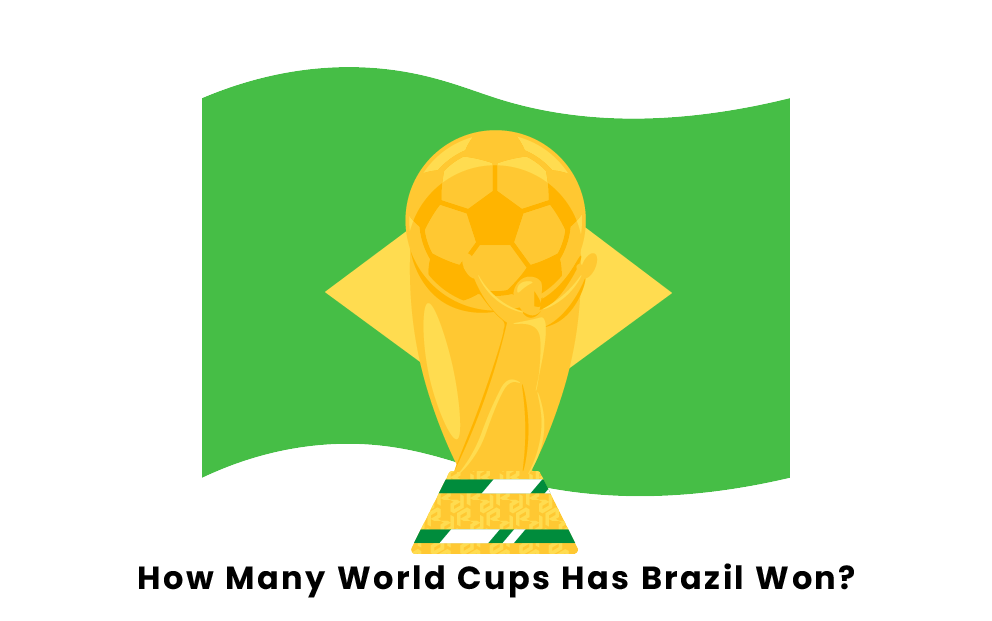 Brazil is an international powerhouse when it comes to soccer, with an impressive five World Cup titles. They are the only country to make an appearance at every World Cup in history from 1930-2022, making 22 tournaments in total and clinching titles in 1958, 1962, 1970, 1994, and 2002. Brazil has reached the World Cup final seven times in total, making them second to Germany for the all-time record (8).

Brazil won their first World Cup against Sweden in 1958, taking the Swedish team down 5-2 in the finals after defeating France by the same score in the semifinals and Wales by 1-0 in the quarterfinals. They were then led by a young Pelé, who was only 17 years old when they took their first World Cup victory.

They carried their success into the next tournament in 1962. Brazil won again, becoming back-to-back championships, defeating Czechoslovakia 3-1 in the finals after taking down Chile 4-2 in the semifinals and England 3-1 in the quarterfinals.

It did not take long for Brazil to find another World Cup victory, securing their third in 1970 by taking Italy down 4-1. Prior to the finals, they had defeated Uruguay 3-1 in the semifinals and Peru 4-2 in the quarterfinals. This team is widely accepted as Brazil’s best national team ever, including a myriad of greats such as Pele, Jairzinho, Tostao, Rivelino, Gerson, Carlos Alberto, and Clodoaldo. The team was known for its ability to entertain crowds with an attacking yet skillful style of play.

After a 24-year dry spell for the Brazilians, the team won yet another World Cup in 1994, but this time it meant more than just football. In the wake of the devastating loss of Ayrton Senna, a popular F1 driver from Brazil, this win allowed citizens to gather around something together as a country and pumped life back into the nation.

Captained by Dunga and alongside greats like Ronaldo, the team defeated Italy 3-2 in the finals by penalty kicks, following a 1-0 victory against Sweden in the semifinals and a 3-2 victory against the Netherlands in the quarterfinals.

Brazil went for their fifth and most recent World Cup not long after in 2002, beating Germany 2-0 in the finals following a 1-0 victory over Turkey in the semifinals and a 2-1 win over England in the quarterfinals.

Every World Cup that the Brazil Men’s National Football Team has won has featured star players. Pelé is one of the most notable, and he played his first World Cup in 1958 at only 17 years old, winning the Adidas Silver Shoe that year. He also scored one of the four goals in the 1970 World Cup win.

Garrincha was also a key player and proved to be essential in 1962 when Pelé was out. He also won the Adidas Golden Boot that year.

The key player in the 1994 World Cup was Romário de Souza Faria, and he won the Adidas Golden Ball and the Adidas Bronze Shoe.

In 2002, Ronaldo was one of the most important Brazilian players, and he won the Adidas Golden Boot following Brazil’s victory.

Despite qualifying for every World Cup since the tournament’s inauguration in 1991, the Brazilian women’s team has yet to be successful in clinching a Women’s World Cup title. However, they have gotten close to one before; the team fell just short of a World Cup victory in 2007 when they fell to Germany in the finals after taking down a strong US Women’s National Team in the semifinals. They also got close a few years prior to that when they took third place in the 1999 World Cup.

Pages Related to How Many World Cups Has Brazil Won?