How Many Players Are On A FIFA World Cup Team? 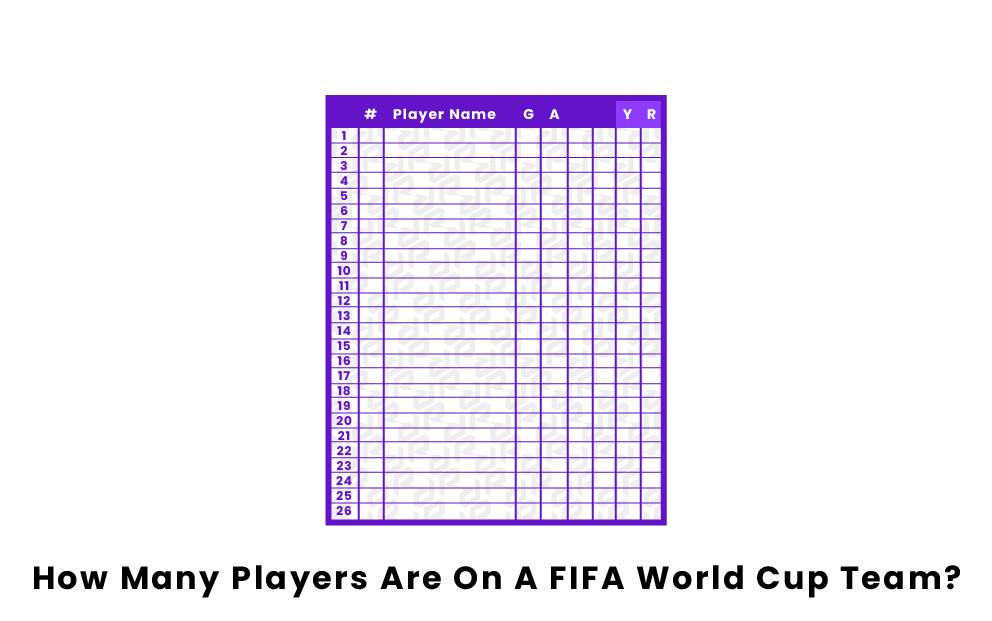 The FIFA World Cup is one of the biggest sporting events in the world. The event takes place every four years, with 32 qualifying countries. Each nation selects its team in advance through the qualifying process. Read below to learn about how players make a World Cup team.

In the months leading up to the tournament, each participating country’s coach submits an eligible roster of players. This number can vary, but due to the extreme heat in Qatar for the 2022 World Cup, the list is at 55 (up from 35 in 2018). Then, two weeks before the competition begins, the coach trims the roster down.

Again, this number changes, but for 2022, the final roster is made up of 26 players (up from 23 in 2018). There’s no position limit, so in theory, rosters can have 26 goalkeepers, but that is, of course, not practical. Instead, rosters typically have around three goalkeepers, with an even amount of defenders, midfielders, and forwards.

There are 11 starters for each team in soccer matches, and this is no different for the World Cup. The number of starters includes the designated goalkeeper and 10 other players, known as “outfielders.” The coach can set his or her lineup however they please. If the team is looking to be more defensive, they’ll start fewer forwards and more defensemen, and vice versa.

There are 15 eligible bench players for each World Cup team; however, only five of them are made available for each match, which is up from three in the 2018 World Cup. Also, there are usually only 12 reserves for each club.

One of the most famous goals scored by a substitute came in the 2014 World Cup Final, between Germany and Argentina. German Forward Mario Götze replaced Miroslav Klose in the 88th minute, and with seven minutes to go in extra time, he controlled a cross and fired home the game’s only goal to win Germany the World Cup.

How many players can a country take to the World Cup?

This number changes from tournament-to-tournament, but for the 2022 World Cup, each country can take 26 total players, with 15 of them having bench roles. Of the 15 eligible substitutes, only five are allowed to dress for a game. The number 26 stems from the final cutdown of the original list of 55 players.

What is the age limit for the FIFA World Cup?

One of the unique aspects of the FIFA World Cup is that there are no age restrictions to participate in the tournament. The youngest player to ever play in the World Cup was Norman Whiteside of Northern Ireland, who was only 17 years and 41 days old at the start of the 1982 World Cup. The oldest player ever was Essam El-Hadary of Egypt, who was 45 years and 160 days old at the beginning of the 2018 World Cup.

Can a player play for two countries in the World Cup?

As of 2020, players can play for multiple national teams at the World Cup only if they were eligible to play for that new country before they made the switch. This eliminated the rule of players not being eligible to switch countries if they had already made an appearance for a different country.

Pages Related to How Many Players Are On A FIFA World Cup Team?