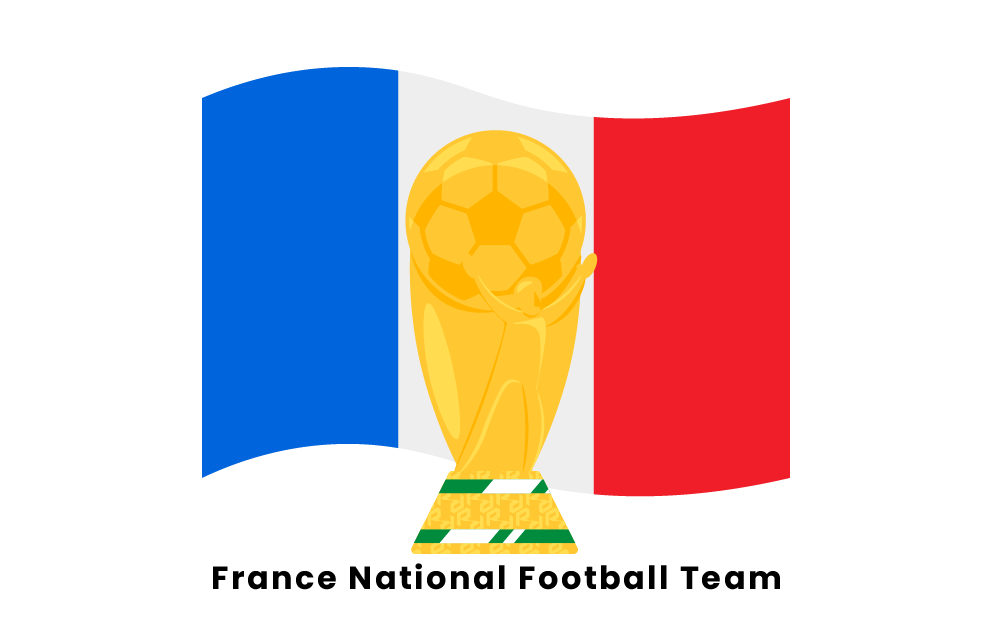 Over the course of their long history in the sport of soccer, the French national team has achieved some notable success, including two World Cup wins, one of which was at the most recent World Cup in 2018. Can the French repeat their performance at the 2022 World Cup in Qatar? Before they set their sights on the upcoming tournament, let’s learn all about the team’s history, players, and accolades!

Known as Les Bleus, the French national football team is the defending champion heading into the 2022 World Cup. In addition to their current success, the team also experienced a period of dominance in the 1990s, capped off by their (first) World Cup victory in 1998. The French national team is one of the oldest national football squads and was one of four European teams to compete in the inaugural FIFA World Cup in 1930. The team has had success in other tournaments, including two European Championships, the 1985 CONMEBOL–UEFA Cup of Champions title, two FIFA Confederations Cups, and the 2021 Nations League title.

The French national football team was officially founded in 1904, right before the founding of FIFA itself. However, the squad had previously competed in the 1900 Summer Olympics, earning a silver medal. The team’s first international match was contested in 1904 against Belgium in Brussels and ended in a draw. The team participated in the inaugural FIFA World Cup in 1930 but was eliminated in the group stage. The 1950s were a period of success, with stars such as Just Fontayne and Raymond Kopa propelling Les Bleus to the 1958 World Cup semi-final and the 1960 UEFA European Football Championship semi-final.

The 1990s were a new period of dominance, notably sparked by the addition of star Zinedine Zidane. The team won the 1998 World Cup, which France hosted. After a decline in the early 2000s, the French national team returned to form, winning the 2018 World Cup. This dominant performance was led by stars Antoine Griezmann and Kylian Mbappé.

The French national football team has three main rivals: Germany, Italy, and Portugal. The rivalry between Germany and France dates to a Prussian invasion of France in 1870. However, the rivalry is mostly one-sided, as German fans consider the Netherlands or Italy to be their biggest rival. The rivalry with Italy is a pure soccer feud, as the teams have met in several World Cup and Euro matches, notably the 2006 World Cup Final, which Italy won 5-3 after a penalty shootout. Also known as the Battle of the Vineyards or the Vineyard Wars, the rivalry with Portugal is one of the oldest among national soccer clubs. They first met in 1926, and the rivalry has been one-sided, with France winning 19 of their 28 head-to-head matches.

The French national team’s kits utilize a blue, white, and red color scheme that references the colors of the French flag and is known as the tricolore. The French home kit consists of blue shirts, white shorts, and red socks. Their away kit is currently all-white, but the team also sometimes uses red shirts with blue shorts and socks for away matches. Nike has been the official kit supplier for the French national football team since 2011.

Has France ever won the World Cup?

France has won the World Cup two times, in 1998 and 2018. Their first World Cup Championship occurred at the 1998 World Cup, which France hosted in addition to playing in. They beat Brazil in the final, which was held at their own stadium, the Stade de France, making their victory even more special. France’s second World Cup victory came in the 2018 Russia World Cup, in which they defeated Croatia in the final.

How many World Cup appearances has France made?

Who is France’s all-time scorer?

The all-time goalscorer for the French national team is Thierry Henry, who played as a forward for the team between 1997 and 2010. In his 123 appearances for the French National Team, Henry scored an astonishing 51 goals. Henry was a part of the 1998 squad which won France its first World Cup, which also happened to be on French soil. In that tournament, he scored three goals, becoming France’s highest goalscorer of the tournament. Henry is currently an assistant coach for the Belgium national team, which will appear at the 2022 Qatar World Cup.