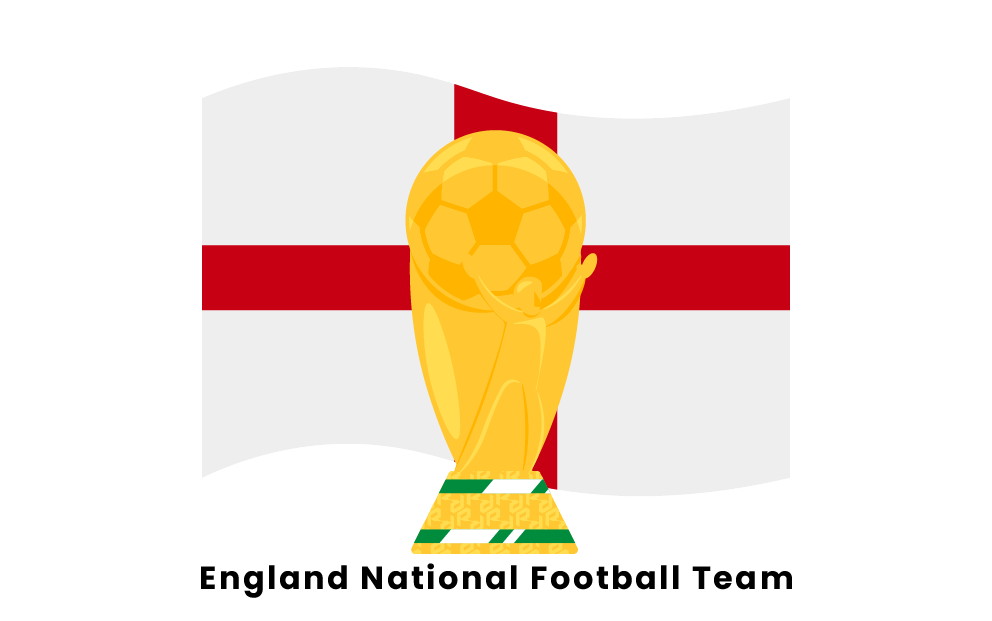 Alongside Scotland, England is the world’s oldest national football team. Their biggest and most memorable win was the 1966 World Cup final, in a tournament they hosted. In recent years, the English national team has been experiencing a resurgence, finishing third place in the 2019 UEFA Nations League Finals and runner-up at the 2020 UEFA European Championship. Although the English team competes in those two international tournaments and the FIFA World Cup, they do not participate in the Olympics.

Tied for the oldest national football team in the world, England played their first official match against Scotland in 1872. This was the first international match sanctioned under football association rules. However, the two squads had previously met for an exhibition match in 1870. The team joined FIFA in 1906 and opened its home venue of Wembley Stadium in 1923. An initially rocky relationship with FIFA kept England from competing in a World Cup until 1950.

Since then, they have made a reliable showing in the tournament, appearing in 16 World Cups. Their best result in a World Cup was their 1966 win on home soil. Since the 1970s, the team has had a rocky record, going through several managers but staying competitive. The team has seemed to stabilize since manager Gareth Southgate took the helm in 2016. The Three Lions have seen some promising finishes in recent tournaments, but they are still trying to crack the upper echelon of international soccer.

England’s main soccer rivals are Scotland, Ireland, Germany, and Argentina. The rivalry with Scotland stems from their initial meeting in the first-ever international soccer fixture. It is a fairly even match, although the rivalry has cooled somewhat since regular yearly matches stopped being held in 1989. Ireland has a longstanding political feud with England, informing their soccer rivalry. The English rivalry with the Germans is enduring but one-sided. It dates from their first meetings in 1899, but the Germans largely consider the Dutch and Italians to be bigger rivals. The rivalry with Argentina has a political basis, dating from the 1982 Falklands War. Most fans consider the teams to be evenly matched, but England holds the edge over Argentina in their official head-to-head record.

Has England ever won the World Cup?

England won the World Cup once in 1966. Their first and only victory was especially sweet as England was the host nation of the tournament. In an exciting extra-time final, they defeated West Germany 4-2. The Three Lions have struggled to achieve the same level of success since then, with their next-best results in the World Cup being two fourth-place finishes in 1990 and 2018.

Who is England’s best player?

England’s best player is Bukayo Saka. The 21-year-old plays winger, left-back, and midfielder for Arsenal in the Premier League and has 18 international appearances. He was voted 2021-22 England Men’s Player of the Year, ahead of runners-up Harry Kane and Declan Rice. With Arsenal, Saka has won a FA Cup and an FA Community Shield and was the club’s leading goalscorer in the 2021-22 season.

Who is England’s all-time scorer?

England’s all-time leading goalscorer is Wayne Rooney. Over 120 international appearances, the forward and midfielder scored 53 goals for England. Rooney is also the leading goalscorer for his Premier League club, Manchester United. He holds the record for most international outfield appearances by an English player. One of the greatest players of his generation, Rooney has been named the England Player of the Year four times.