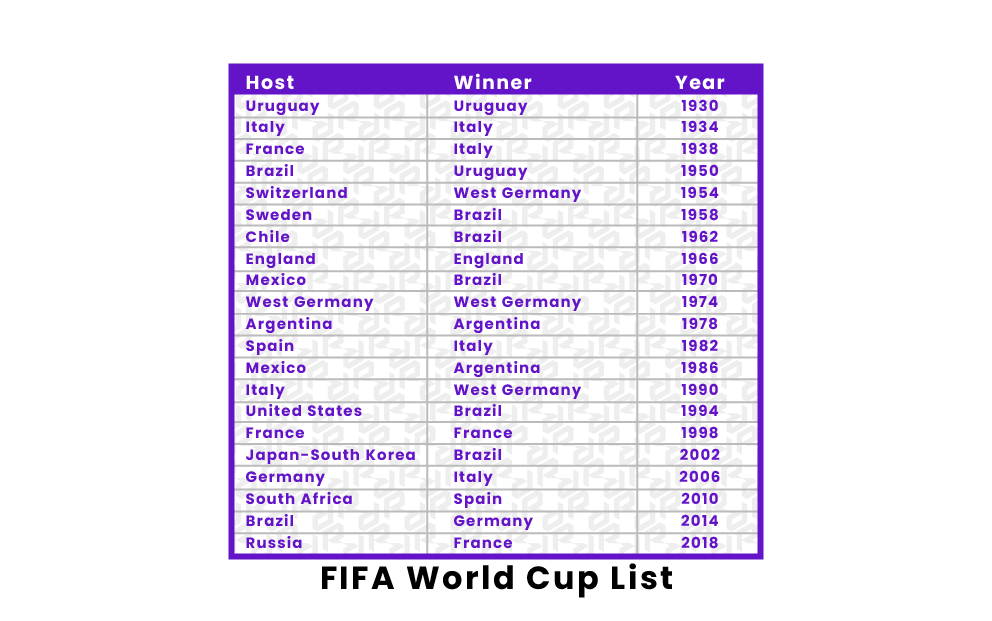 The Qatar 2022 FIFA World Cup will be the 22nd edition of the tournament. Some of the best moments in soccer history took place at the World Cup, thanks to legends such Pelé, Ronaldo, Diego Maradona, and Lionel Messi. Winning the World Cup is a feat that only eight national teams have achieved in almost 100 years of the tournament, meaning perennial glory for the players that were able to hoist that trophy.

What Years Has The FIFA World Cup Taken Place In?

The first-ever World Cup was held in Uruguay, and only 13 teams took part in it. The four winners of the groups (Argentina, United States, Uruguay and Yugoslavia) advanced to the semifinals. Host country Uruguay dominated the knockout phase, defeating Yugoslavia 6-1 in the semifinal and Guillermo Stabile’s Argentina 4-2 in the final.

The 1934 FIFA World Cup was the first to be played in Europe, as Italy hosted the tourney. Like Uruguay in 1930, the Italians dominated the tournament and won their first-ever World Cup title as the host country, defeating Czechoslovakia 2-1 in the final. Oldřich Nejedlý was the highest goalscorer with five goals.

Led by legendary coach Vittorio Pozzo, the Italian National team became World Champion again at the 1938 World Cup in France, beating Hungary in the final. Similarly to the previous edition of the tournament, the 16 teams only competed in a single-leg knockout stage without being divided into groups first.

Twenty years later, Uruguay triumphed again at the 1950 World Cup in a dramatic fashion. “La Celeste” went into the final as an underdog facing host country Brazil, who had defeated Sweden 7-1 and Spain 6-1 in the previous two rounds. Brazilian star Ademir was the top scorer with eight goals.

West Germany became the second victorious European national team when they triumphed at the 1954 FIFA World Cup in Switzerland. The Germans smoothly sailed towards the final, where they faced Hungary. Despite a goal from superstar Ferenc Puskás, Hungary had to settle for the silver medal in a tournament where their ace Sándor Kocsis had scored 11 goals.

After a third-place finish in 1938 and the heartbreaking final loss in 1950, Brazil was finally crowned champion in the 1958 World Cup in Sweden. This was the tournament where the world first noticed the pristine talent of Brazilian striker Pelé, who, despite being only 17 at the time, led Brazil with six goals.

A star-studded Brazilian side that could count on Garrincha, Vavá, and Pelé claimed its second consecutive title at the 1962 World Cup. The Brazilians defeated hosts Chile in the semifinal to advance to the final against Czechoslovakia, who lost their second final after the 1934 defeat against Italy.

Host country England reached their first and only World Cup final in 1966, winning 4-2 against West Germany in one of the most controversial finals of all time as Geoffrey Charles’s goal that put England ahead in the final did not entirely cross the line. The tournament saw the rise of Portuguese legend Eusebio, who was the top scorer with nine goals.

The 1970 World Cup in Mexico was once again Pelé’s tournament. The Brazilian superstar scored four goals in the tournament, including one in the final, as Brazil beat Italy 4-1 to win its third World Cup title. Gerd Müller was the top scorer with ten goals, which was still not enough to lead West Germany to the final.

West Germany went back on top of the world in 1974 as they hosted the tenth edition of the tournament. Brazil, the Netherlands, Poland, and West Germany reached the semifinals after advancing in the double group stage phase. The final was a hard-fought contest as Germany came back from an early goal from the Dutch team.

Argentina won their first-ever World Cup when they hosted the tournament in 1978. The Argentinians finished second in the first group stage and then won the second, booking their ticket for a final against the Netherlands. Once again, the Dutch national team, led by Johan Cruyff, had to settle for second place, defeated by Mario Kempes’ brace.

After a rough start with three ties in the first group stage, Italy pulled off a heroic run defeating Argentina and Brazil in the second group stage and Poland in the semifinals to advance to the final against West Germany. A 3-1 dominating win crowned Italy World Champions at the 1982 World Cup in Spain.

The 1986 FIFA World Cup, the second to be hosted in Mexico, saw one of the greatest individual runs in the history of the tournament. Diego Maradona led Argentina to legendary wins against England in the quarterfinals and West Germany in the final. This was the first to be organized following the same structure as the current one.

After 56 years, the World Cup was held once again in Italy. Despite a great run from top scorer and best player of the tournament, Salvatore Schillaci, Italy had to settle for a bronze medal as West Germany and Argentina met in the final once again. This time, the Germans got their revenge thanks to a penalty from Andreas Brehme.

The 1994 World Cup final was a remake of the 1970 one, as Brazil beat Italy again, this time on penalties. Sweden finished third, defeating Bulgaria, who turned out to be the biggest surprise of the tournament, led by six goals from tournament top scorer Hristo Stoichkov. This was the first World Cup to be held in the United States.

Brazil reached the final again in 1998 but came out defeated by hosts France, who dominated the game, earning their first World Cup star with a 3-0 win. This was the first-ever FIFA World Cup with 32 teams and followed the same group stage plus knockout phase structure from the previous two editions.

Reaching their third consecutive final, a record to this day, Brazil won their fifth title in 2002 against Germany, led by the trio Ronaldo, Ronaldinho, and Kaká. This was the first edition of the tournament to be hosted in Asia, as games took place in Japan and South Korea, which placed fourth overall.

After 24 years of waiting since their last win, Italy won its fourth World Cup title at the 2006 tournament in Germany. The Italians beat France after a penalty shootout, while hosts Germany placed third after beating Portugal. Germany’s Miroslav Klose won the Golden Boot, while France’s Zinedine Zidane took home the Golden Ball as the best player in the tournament.

The 2010 FIFA World Cup took place in Africa for the first time, with South Africa being selected as the host country. This 19th edition of the tournament saw Spain winning its first title, handing the Netherlands their third World Cup loss. The tournament was also notable for being the first time Uruguay had made it to the top four in 50 years.

The 2014 World Cup was the second edition of the tournament to be hosted by Brazil, after the 1950 edition. Once again, it ended in a dramatic way for the hosts, who lost 7-1 in the semifinal against Germany, who would end up becoming tournament champions after defeating Argentina in their third matchup in a World Cup final.

The most recent edition of the World Cup, which was played in Russia, saw France winning their second title in a dominant fashion, beating Croatia 4-2 in the final. Despite the loss, Croatia, led by Golden Ball winner Luka Modrić, had an unprecedented run and reached the final by upsetting England.

How many FIFA World Cups have there been?

There have been 21 editions of the World Cup played from 1930 to 2018, excluding a break due to World War II from 1938 to 1950. Countries from five different continents have hosted the World Cup. Brazil, France, Germany (1954 in West Germany), Italy, and Mexico have all hosted the tournament twice. The United States hosted the tournament for the first time in 1994, while there have also been tournaments in Asia (Japan-South Korea 2002) and Africa (South Africa 2010).

Where is the next FIFA World Cup?

The 23rd edition of the FIFA World Cup will be held in Qatar. It will be the first time that a World Cup is played in the Middle East. The extremely high temperatures in the country have led FIFA to move the World Cup to November. Thus, the 2022 World Cup, which will start on November 20 and end on December 18, will be the first edition not to take place during the summer.