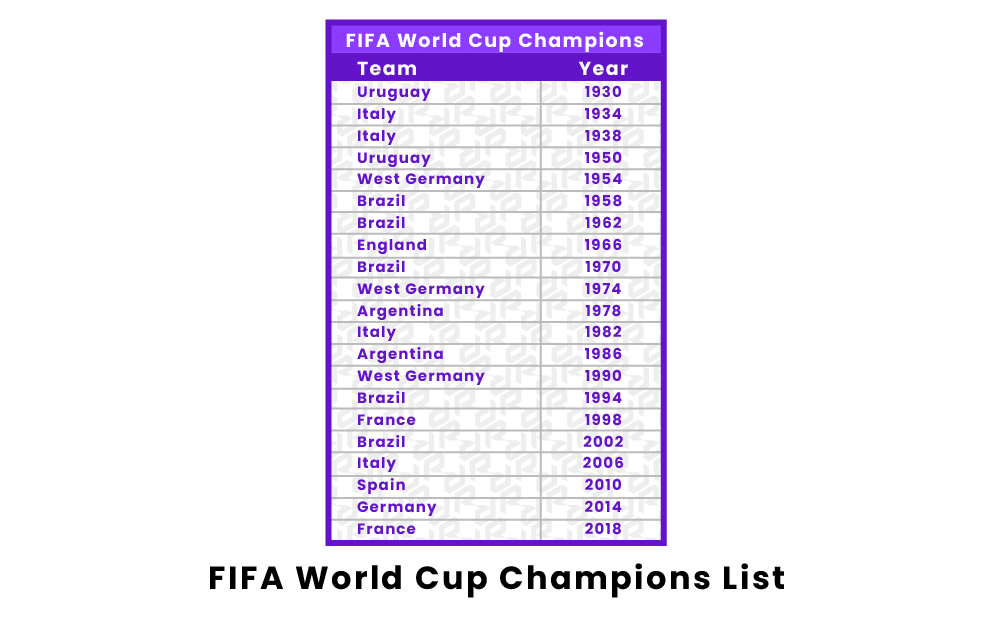 Winning the World Cup automatically turns any national team into a legendary squad of players whose heroics will be talked about for years to come. In 21 editions of the World Cup, 79 national teams have taken part in the tournament, but only eight of these have had the honor of winning the title, showing how exclusive the privilege of becoming World Champions has been.

Uruguay won the first ever World Cup in 1930, also making history as the first team to win a World Cup while being the host country. Italy followed suit by accomplishing the same feat in 1934, and doubled up its tally in 1938 with a win in France. After these three editions of the tournament, World War II put a halt to the World Cup for 12 years, and it was not held again until 1950 when Uruguay upset host nation Brazil in the final. The 1954 World Cup went back to Europe as Germany (then known as West Germany) won its first title in Switzerland.

After Pelé joined part of the World Cup squad, Brazil became the team to beat and triumphed in 1958, 1962, and 1970, while England won their first and only title in 1966 on their home field. West Germany hosted the tournament in 1974 and beat the Netherlands in the final to win their second trophy. The Dutch national team would go on to lose again in 1978 to the host country Argentina.

After a 44-year drought, Italy won their third World Cup title in 1982, while Argentina won in 1986, beating West Germany, who had also lost four years earlier. The 1990 final was a rematch of the 1986 one, but this time, Argentina had to settle for the runner-up title. In 1994 Italy and Brazil faced each other again for the first time since 1970, with the Italians losing the final in a dramatic penalty shootout.

Brazil would advance to two more finals, in 1998 and 2002, losing the first against hosts France and clinching their record-setting fifth World Cup title four years later, against Germany. Italy triumphed again in 2006, beating France after penalties, while Spain won its first title in 2010, handing the Netherlands their third final loss. The 2014 final represented the third chapter of the Argentina-Germany rivalry, with the Europeans winning again. A dominant 4-2 win over Croatia makes France the reigning champions of the most recent World Cup in 2018, as the world eagerly awaits the results of the upcoming 2022 Qatar World Cup.

Which Countries Have Won the FIFA World Cup?

Which Country Has Won The Most FIFA World Cups?

Across the 21 editions of the Men’s FIFA World Cup, Brazil has won the most tournaments overall. The countries with the most World Cup wins are:

Which country has won the most FIFA World Cups?

Brazil is the all-time winningest country in FIFA World Cup history, with five titles won from 1958 to 2002. Their first three World Cups, won in 1958, 1962, and 1970, saw soccer legend Pelé dominate against every opponent, leading Brazil to redemption after their 1950 loss on home soil. The squads in 1994 and 2002 were equally-stacked with talent, as players such as Romário, Ronaldinho, and Ronaldo led Brazil to glory.

Which teams have won the most FIFA World Cups?

After the 2014 title, Germany became the second team, after Italy, to reach four World Cup wins. No team is at three in the rankings, but Argentina, France, and Uruguay are tied for fourth place, with two World Cup titles each. England won it once in 1996 as the host country, while Andres Iniesta’s extra-time game-winner gave Spain their first-ever World Cup trophy in the 2010 tournament in South Africa.