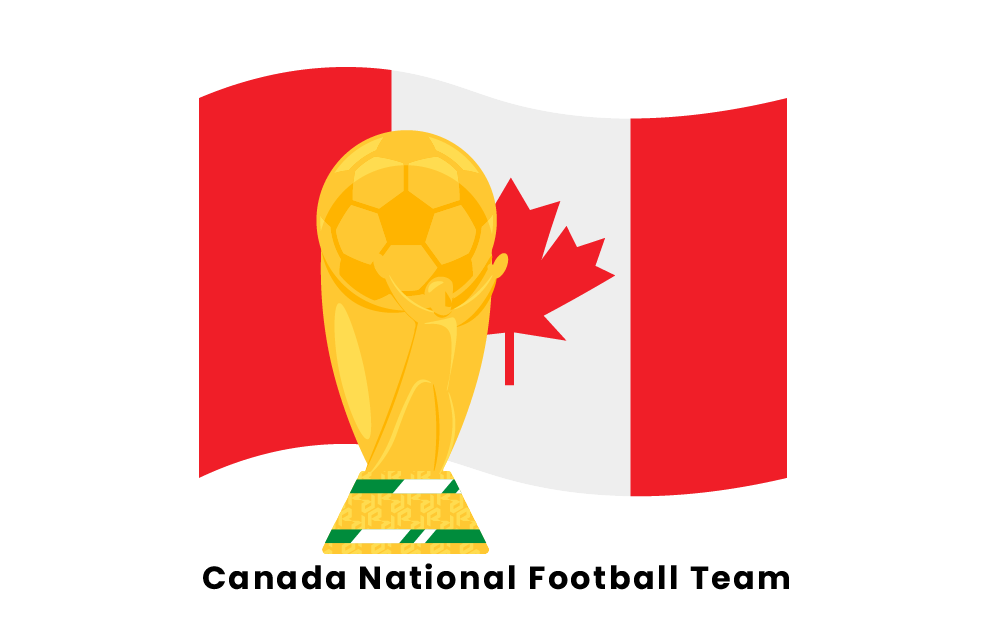 Soccer is without a doubt the most popular sport in the world, and the FIFA World Cup provides teams from countries all over the world the chance to achieve glory in the sport every four years. The Canadian national soccer team hasn’t yet won a World Cup, but that could change very soon! Keep reading to learn all about Canada’s history on the soccer world stage!

An up-and-coming team on the soccer world stage, Canada has not yet experienced much success in the international arena. Despite having existed since the late 1800s, the team has only appeared in the World Cup twice, including their upcoming appearance in the 2022 World Cup, and in their only other appearance, they did not advance past the Group Stage. Nevertheless, Canada has built up their squad over the years, and has secured a few notable championships. They are definitely looking to improve their World Cup chances in the upcoming tournament, and as a whole.

Canada has had a national soccer team since as early as 1876, when the game was played by the two precursors to the Canadian Soccer Association, the Dominion Football Association and the Western Football Association. In the first official international match Canada played, an 1885 match against the United States, Canada won 1-0. Canada’s early successes continued with a gold medal at the 1904 Summer Olympics. After the First World War, an influx of British immigrants and refugees into Canada made soccer even more popular, tying Canada more firmly to England in their practice of the sport. As a result of this, when Great Britain’s soccer associations elected to withdraw from FIFA in 1928, Canada followed suit, and thus did not enter the World Cup from its inaugural edition in 1930 to 1957.

In 1958, Canada finally attempted to qualify for the World Cup after rejoining FIFA, but they did not qualify. They then declined to enter the following two World Cups, before finally returning to qualifying attempts in 1970. Nevertheless, they failed to qualify until 1986, when they finally reached the tournament. In that tournament, hosted by Mexico, Canada played in the Group Stage, but did not advance to the Knockout Stage.

After the 1986 World Cup, Canada yet again entered a slump in their international fortunes, failing to qualify for the World Cup between 1990 and 2018. However, between 1985 and 2022, the Canadian team achieved some success in other major tournaments, including two wins in the Gold Cup, in 1985 and 2000, and one North American Nations Cup win in 1990. After failing to qualify for the World Cup for 32 years, Canada has officially qualified for the 2022 Qatar World Cup, and hopes to achieve some success there.

Due to their proximity and shared relations with each other, it is almost natural that Canada’s biggest rivals on the international soccer stage are the United States. The two teams have some commonalities in that neither of them have won a World Cup, and the shared goal of taking home a victory often lends to the teams seeing each other as barriers standing in the way of victory, which makes their rivalry even more exciting. Of the two teams, the United States has more of an edge in the rivalry, with 16 Gold Cup match wins to Canada’s nine. For their part, the United States sees Mexico as their main rivals, with Canada as a more secondary opponent.

Canada’s home and away kits both make use of the country’s primary flag colors, which are red and white. For their home kits, Canada wears a bright red shirt with pale red and white designs on the shoulders, bright red shorts, and bright red socks. For their away kits, Canada wears a plain white shirt, plain white shorts, and white socks. Canada also sometimes wears an all-black kit as their third colors. Canada’s kits are provided by Nike, who have been providing the team with their apparel since 2019, after replacing Umbro.

Has Canada ever won the World Cup?

Canada has never won the World Cup, and in fact, they have never passed beyond the Group Stage. Their only Group Stage appearance came in the 1986 Mexico World Cup. In that tournament, they were placed in a group with the Soviet Union, France, and Hungary. Canada faced France first, and were defeated 1-0. They then lost to Hungary and the Soviet Union, both with scores of 2-0, finishing at the bottom of their group and failing to advance to the Round of 16.

How many World Cup appearances has Canada made?

Canada has made only two appearances across the 22 editions of the World Cup, the first being the aforementioned 1986 World Cup, and the most-recent being the upcoming 2022 World Cup in Qatar. Canada did not enter any of the World Cups from 1930-1954, as well as those held in 1962 or 1966. For all the other World Cups, Canada attempted to qualify, but failed to make the tournament.

Who is Canada’s all-time scorer?

Canada’s all-time goalscorer is Cyle Larin, who has played for the team from 2014 to the present day. In 55 appearances for Canada, Larin has scored 25 goals. Larin will have a chance to add to his record total at the 2022 World Cup, where he will play for Canada as a forward.