What are the rules of fencing? 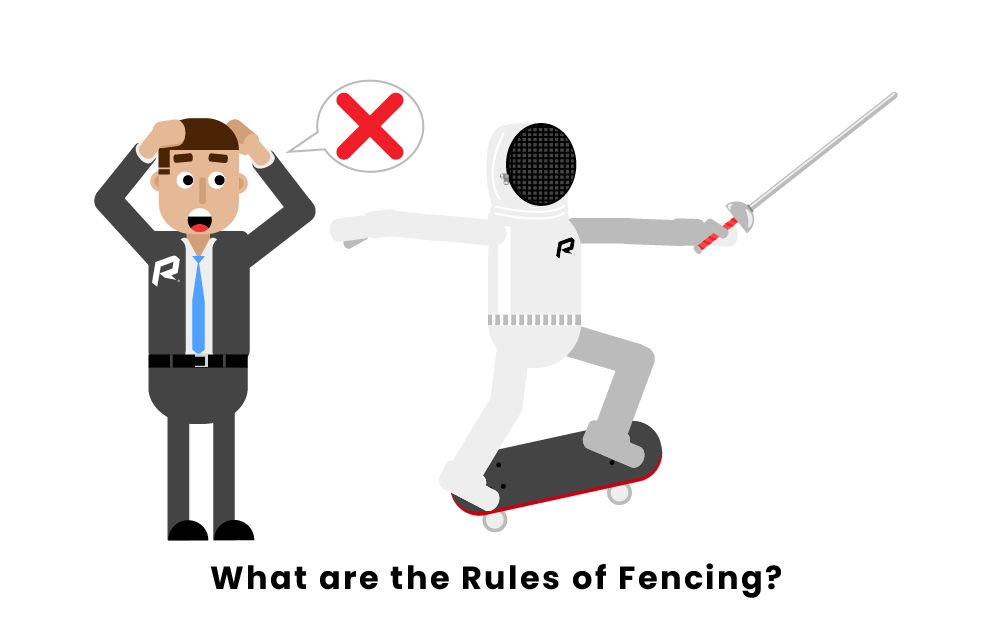 Every fencing match or “bout” will consist of three, three-minute-long periods. The scores of each individual at the end of each bout are based on the amount of points or touches earned. Each bout begins the same. The referee will ask each individual if they are ready, and they must respond “yes” once they have positioned themselves in the “en garde” position. This position looks like a slightly bended knee, with the individual’s dominant foot facing forwards and their non-dominant, or back, foot facing in the perpendicular direction. This means that your hips will be at just over a 90 degree angle.

In order to score any points in fencing, one must use the lunging motion. A lunge in fencing, in simple terms, looks like a very over exaggerated step forwards. Different fencers have different ways and techniques for lunging, but they all must use this motion in order to get closer to their opponent, so that they can reach them with their sword, and therefore potentially earn a point. When either a point has been scored or a player requires stoppage of play, the referee can pause the match by saying “halt” and therefore letting both athletes know to put their weapons down. Unlike other sports, fencing scoring depends on the weapon chosen and used by the individual.

All scoring is also based off of the amount of touches that an individual participant has made within the three minute time frame. The fencer with the higher amount of touches will win, or in special circumstances if a player has scored five touches they will automatically win the bout.  Luckily, with modern day technology, most of the scoring for fencing is done electronically. Using sensors on each participant's suit and equipment, touches can be assessed using a computer based on the placement of the touch. 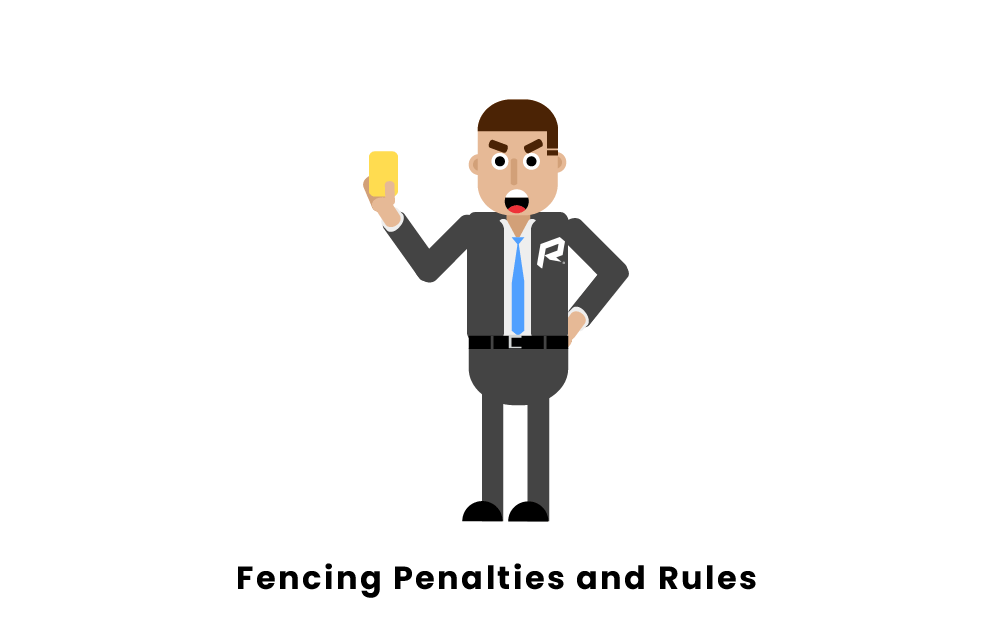 Like any sport, penalties in fencing typically stem from any sort of physical bodily contact. Fencing is a very particular sport, and therefore participants and referees take any violations very seriously. Other penalties in fencing can include, but are not limited to, failing equipment inspections, not following the referees guidelines, or even from delaying the start of the bout. In fencing, a card system is used to give out and explain the violation that has been committed. The referee will begin by giving the individual who has violated the rules a verbal warning. Following the verbal warning will come a yellow card, red card or black card depending on the severity of the violation.

Right-of-Way is a term used in fencing to describe who has actually earned the point, if both fencers have been hit. Because many time fencers touch each other or get hit by the other within seconds of one another, this helps to determine who will actually earn the point awarded for those touches. In addition, this allows both participants and viewers to distinguish between two main events that can occur in any fencing match.

The first, and the reason that right-of-way is so important is when both participants have been hit at the relatively same time. The second scenario is when one player is actively trying to touch the other, while the other is focused solely on defending themself from being hit. This concept is also important because it helps to distinguish which hits were on the proper targeted locations of the opponent. 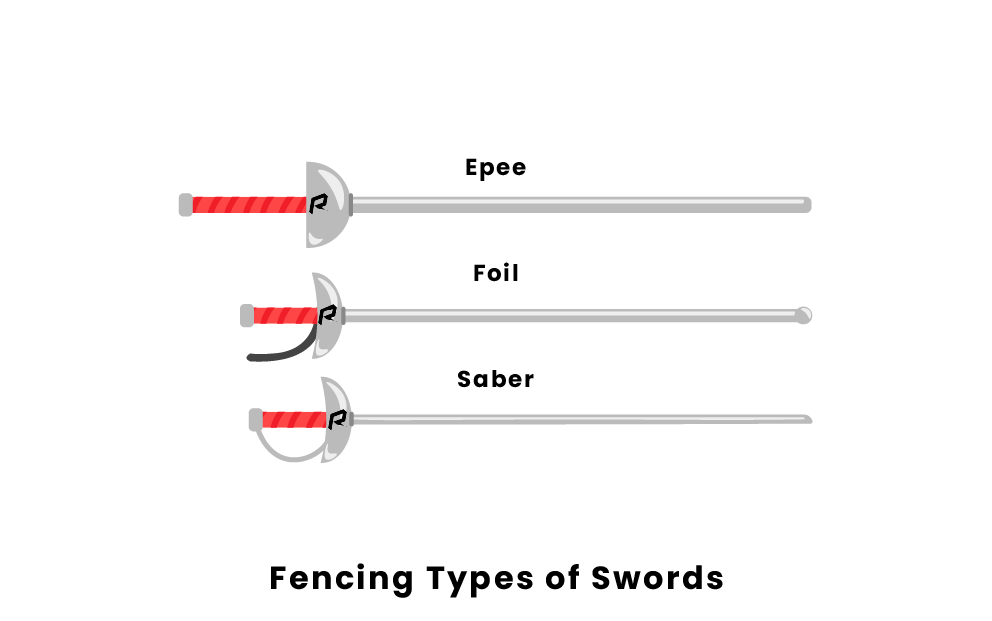 The first and most simple weapon that can be used in fencing is known as the “Épée.” The épée is the heaviest weapon that can be used in fencing, and is typically the largest. In order for an individual to score a point or touch in épée, they must touch their opponent squarely with the point of the sword before they get hit themself. Because the fencers in épée can earn points from touching their opponents anywhere on their bodies, it is extremely important for the referee to make sure they aren’t earning points from touching the floor.

When a fencer uses a sabre to participate in a fencing match, they have the ability to use any party of their sword to earn a point. This means that unlike in épée or foil they are not limited to earning points by just using the tip of their weapon. That being said, the fencer can only use any part of the blade to hit their opponent. Because this extra amount of sword is allowed to be used, more specific targets must be hit in order for a point to be counted. When using a sabre, fencers must hit either the head, arms, or torso in order for their touch to count for points.

In the use of foil, the fencer must not only make sure they use the tip of their sword to touch their opponent, but that it also lands in the proper location. In foil, you must touch on either the groin or torso area, otherwise it will not count. To help distinguish these specific regions that the athlete must focus on, typically a lamé will cover these areas. A lamé is a shiny material that will signal a colored light when a touch qualifies for a valid point.

What happens if you get a yellow card in fencing?

Yellow cards in fencing are given out to players who violate the rules. This means that when a referee gives a yellow card to an individual they have only slightly violated the rules and therefore it is basically a second more official warning. Although a yellow card does not cause any further penalty, if an athlete receives more than one, they will be subject to a more serious red card.

Can a fencing match end in a tie?

No, a fencing match cannot end in a tie, and therefore if the scores match up at the end of the bout, the competition will continue. The match will continue by going into overtime. This overtime is considered “sudden death” and therefore the first player to touch the other or earn a hit will win the match. This overtime period will last one minute and if no one scores a point, the individual who has been awarded priority will automatically win.

What does it mean when you get a black card in fencing?

A black card in fencing is the worst penalty that you can receive. Black cards are given out to only the most severe violations. When a player receives a black card they will automatically be expelled from the match or tournament as a whole. Black cards can be given to anyone, even someone just watching the sport.

Pages Related to What are the rules of fencing?