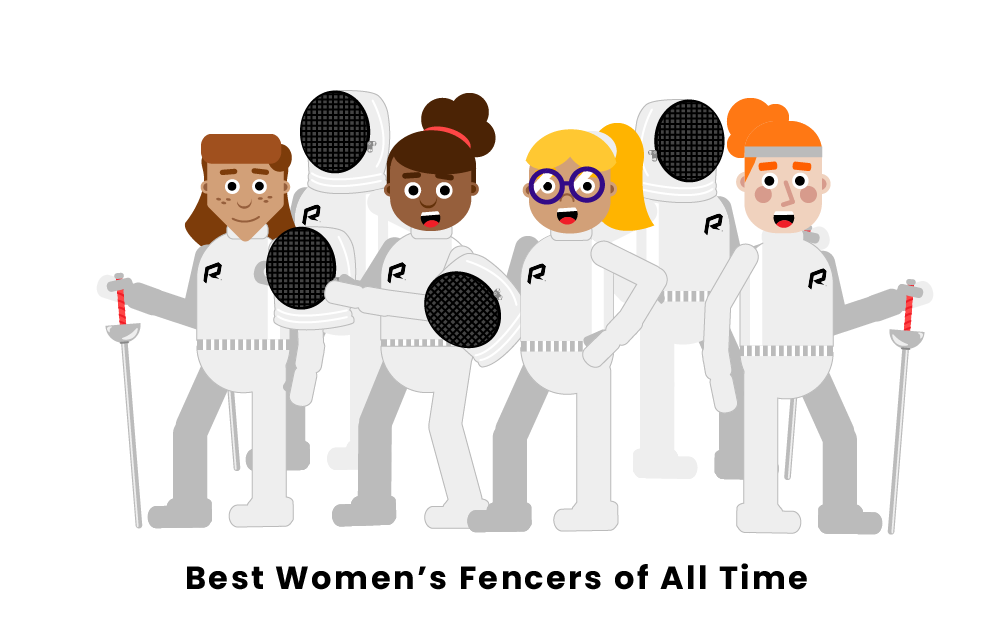 Fencing is a sport with a long history, derived from the martial arts and forms of warfare involving swords. In the modern era, fencing is far less dangerous than other forms of martial combat but nonetheless involves a great deal of speed, skill, and accuracy. As a sport, fencing has become popular for both men and women and is featured prominently in the Olympic Games every four years. Read on to learn about the top six best women’s fencers of all time.

Who are the best women’s fencers of all time?

Italian fencer Valentina Vezzali achieved an unparalleled dominance over the sport in her sixteen years of Olympic-level competition, which stretched from 1996 to 2012. Vezzali’s Olympic debut occurred in 1996, at the Summer Games held in Atlanta, Georgia. There, she successfully won her first two medals, a gold in the team foil competition and a silver in the individual foil. In her second Olympics, held in Sydney, Australia, in 2000, Vezzali competed in the same two events and improved her performance, taking gold in both. She continued her impressive gold-medal streak at the Athens Games of 2004, winning another gold in the individual foil. In Beijing in 2008, Vezzali achieved a milestone that made her indisputably dominant over all other women’s fencers, becoming the first woman in the history of the Olympic Games to win five gold medals in fencing by winning gold in the individual foil. Vezzali also added a bronze medal in the team foil that year. In her final Olympic Games, held in London in 2012, Vezzali added a sixth gold to her medal count in the team foil and won a bronze in the individual.

In all, Vezzali has the most gold medals of any women’s Olympic fencer, and outside of the Olympics, she was equally impressive, having won 11 World Championships in the foil and 17 championship medals in total. Vezzali has also won nine European titles, and between 1996 and 2008, she won the women’s foil World Cup ten times, an all-time record. She has also won gold medals at both the Mediterranean Games and the Universiads.

Hailing from the same country as Valentina Vezzali, Italian fencer Giovanna Trillini began to learn the art of fencing at age seven, joining the Scherma club in the town of Jesi. There, she was encouraged to continue practicing by her first coach, Ezio Triccoli, and eventually developed a great talent for the foil. Trillini made her debut at the World Championships in 1986, then only 16 years old, and won a silver medal.

Trillini went on to make her Olympic debut at Barcelona in 1992, reaching the individual foil finals and winning the gold after a comeback against Chinese fencer Huifeng Wang. She also aided her fellow Italians in beating Germany to win gold in the team foil. In 1996, Trillini returned to the Olympics in Atlanta, fencing in the same two events and again winning a gold medal in the team foil, though she narrowly lost in the individual semifinals to Laura Carlescu Badea of Romania, and had to settle for bronze by defeating France’s Laurence Modaine. In 2000, Trillini repeated her outcomes at the Sydney Games, winning bronze in the individual foil and gold in the team event. In 2004, Trillini did better in the individual foil, taking the silver after losing her final bout to her own teammate, Valentina Vezzali. In Trillini’s fifth and final Olympics, held at Beijing in 2008, she lost a semifinal bout against Korean Hyunhee Nam, and had to fight for bronze against fellow Italian Margherita Granbassi. However, Trillini was unable to win and placed fourth in the event. However, Trillini did help her Italian teammates win bronze in the team event that year. With eight Olympic medals, Trillini stands just below Valentina Vezzali as one of the most decorated women’s fencers in history.

Born in 1985, American fencer Mariel Zagunis had the Olympics in her blood from an early age, as her parents, Catherine and Robert Zagunis, had both been rowers for Team USA in 1976. Mariel herself chose fencing as her sport and started up at age ten, training under coach Ed Korfanty, who has been her lifelong coach since then. As a budding fencer, Zagunis’ role model was none other than Valentina Vezzali, who was Mariel’s constant source of inspiration. In 2004, Zagunis (only 19 years old) made her Olympic debut at Athens and made history, becoming the first American fencer to win gold in 100 years by capturing the individual saber event.

Born in 1912 to a German mother and an Austrian father, Ellen Pries began to fence at age 13 when she traveled to Vienna to attend the fencing school of her aunt, Wilhelmine Werdnik, who had been Germany’s first-ever fencing champion. Due to her dual nationality, she was eligible to fence for both Germany and Austria. After Germany showed no interest in her, she initially competed for Austria and won a bronze medal at the 1931 World Championships. In 1932, she appeared at the Olympics in Los Angeles, reaching the finals in the individual foil and facing off against Judy Guinness of the famous brewing family. The two tied in the initial competition and faced each other in a fence-off, which Pries won, capturing the gold medal. In 1936, Preis returned to the Olympics in Berlin, winning a bronze medal. Between 1929 and 1957, Pries accumulated an impressive 17 individual titles in the foil. She was unable to win gold at the 1948 London Olympics, settling for bronze, and appeared in two later Olympics, 1952’s Helsinki Games and 1956’s Melbourne Games, where she placed sixth and seventh, respectively. After her Olympic career ended, Pries took up work as a fencing teacher and often tutored actors in fencing on the sets of films and stage dramas.

Ukrainian fencer Olha Kharlan began to fence at the age of ten in Mykolaiv, Ukraine. Initially a dancer, Kharlan gave up her former sport for fencing because dancing was too costly for her parents, and her godfather, a fencing coach, encouraged her to pursue fencing. Kharlan made her fencing debut in 2009, winning two gold medals in her first year, once at the Fencing Grand Prix in Moscow, Russia, and a second at the Zone Championships in Plovdiv, Bulgaria. Since then, Kharlan has accumulated a long list of medals, among them 16 Grand Prix gold medals, 13 World Cup gold medals, four World Championship gold medals, and six Zone Championship gold medals as well as many silver and bronze medals in each of those competitions.

Kharlan also has multiple Olympic medals, including two individual medals, both bronze. The first she won at London in 2021 and the second she won at Rio in 2016. Her 2012 Olympic bronze, which she won for the individual saber, made her the first fencer for Ukraine to win multiple Olympic medals. As a team fencer for Ukraine, Kharlan won the gold medal at the Beijing Olympics in 2008 and the silver at Rio in 2016, both medals in the team saber. These medals made Kharlan the first Ukrainian fencer to win four Olympic medals. As a result of her fencing career, Kharlan was named Female Athlete of the Year at the Ukrainian Heroes of Sport Awards in 2009, 2014, 2016, and 2017. She was also chosen to be the model for a fencing doll made as part of the Barbie brand in 2020.

Hailing from the country of Denmark, not historically known for fencing, Ellen Osiier nonetheless made history for her nation by being one of three Danish women’s fencers to appear in the final pool of the 1924 Olympics in Paris which was the first-ever Olympics to include women’s fencing events. Osiier had proven to be the dominant fencer of the three, winning all of her preliminary matches undefeated before reaching the finals, and when she stepped onto the stage for her final matches, she lived up to her prior performance. Osiier went on to be completely undefeated at the 1924 Olympics, taking the gold medal in the individual foil with a stellar performance and becoming the first-ever gold medallist in women’s fencing at the Olympic Games.

To this day, Osiier’s undefeated gold remains Denmark’s only gold medal in Olympic fencing. The medal also remained Osiier's only title, as fencing still did not yet hold World or European Championships for women, and Osiier never won a Danish fencing title. Nevertheless, her medal stands the test of time as not only the first-ever fencing gold for a woman in Olympics history but also her country’s only gold medal in the sport thus far. In 1919, Ellen married Ivan Osiier, a fellow fencer who won a silver in the 1912 Olympics and appeared in many other Olympic Games. Ellen Osiier died in September of 1962, at the age of 72.

Who is the greatest women’s fencer of all time?

Italian fencer Valentina Vezzali is often considered the best female fencer of all time. Vezzali remains the women’s fencer with the most gold medals at the Olympic Games, as well as the most overall medals in fencing at the Olympics, with nine total medals in the sport. In her career, Vezzali has also successfully won 11 World Cup titles, six World Championship gold medals, and nine European Championship titles, as well as many team victories in all of those competitions. After her fencing career ended, Vezzali also became active in Italian politics.

Who is the women’s fencer with the most Olympic gold medals?

Italian fencer Valentina Vezzali is the women’s fencer with the most Olympic gold medals. Over the course of her Olympic career, which spanned five Olympics, from 1996 to 2012, Vezzali won a total of six gold medals in the sport, three in the individual foil and three in the team foil. Vezzali has also won three other Olympic medals, one silver and two bronze, giving her nine total Olympic medals. After Vezzali, the Olympian with the most medals in women’s fencing is Italian Giovanna Trillini, one of Vezzali’s teammates, who has accumulated a total of eight Olympic medals.

Who is the women’s fencer with the most World Fencing Championships gold medals?

Pages Related to Top 6 Best Women's Fencers of All Time