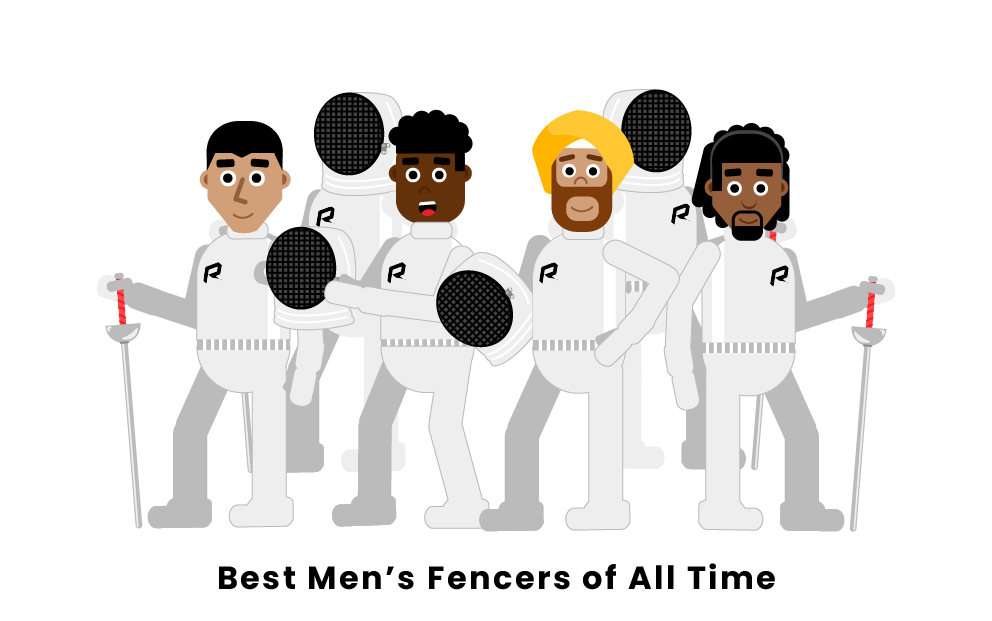 Fencing is one of many popular combat sports practiced across the world. It has a special distinction as the primary sword-based combat sport at the Olympic Games. Many fencers have distinguished themselves in their sport throughout history, particularly by winning medals at the Olympics. Below, we discuss the top six best men’s fencers of all time.

Who are the best men’s fencers of all time?

A Hungarian-born fencer, Aladár Gerevich played an instrumental role in his country’s dominance of Olympic fencing for 36 years. Born in 1910, Gerevich’s first Olympic appearance came in 1932, where he won gold at the age of 22 during the Los Angeles Games as a part of Hungary’s sabre team. In the 1936 Olympics at Berlin, Gerevich accumulated 17 wins in sabre fencing and only two losses, leading his team to victory. He also won bronze in the individual sabre event. Gerevich’s career was briefly interrupted when the Olympics were suspended during World War II. However, after the end of the war, he returned with a vengeance, competing in the 1948 London Games and winning gold in both the team and individual sabre, accumulating 19 wins and only one loss in individual sabre. At the 1952 Helsinki Games, Gerevich continued his success by winning one of each type of medal: a gold in team sabre, a silver in individual sabre, and a bronze in team foil. Though he placed fifth in the individual sabre in 1956, he helped the Hungarian team win another gold in team sabre. Gerevich’s last Olympic appearance was at the age of 50, in the 1960 Rome Games. There, he earned a final gold in team sabre, the sixth consecutive gold for his Hungarian team. Gerevich holds the record of being one of only two athletes to win six gold medals in the same Olympic event, the other being German equestrian Isabell Werth.

Another of the most successful fencers in history, Edoardo Mangiarotti hailed from Italy and won 14 Olympic medals and 13 team World Championships over his 40-year career. Mangiarotti was the son of a master fencer and began to learn lessons from his father at the age of eight. Though he was a natural right-handed fencer, Mangiarotti’s father convinced him to train with his left hand to gain a competitive advantage. In his first Olympics, the 1936 Berlin Games, Mangiarotti was only 17 years old, but his efforts helped Italy secure a gold medal in the team épée event. After the war, Mangiarotti returned to the Olympics and won three more team golds in épée (1952, 1956, and 1960), as well as a silver in the team épée in 1948. In the foil competition, Mangiarotti won a team gold in 1956 and three team silvers in 1948, 1952, and 1960. As an individual fencer, Mangiarotti also excelled, winning a gold medal in the individual épée in 1952 and a silver in the individual foil. He also won individual bronze medals in the épée in 1948 and 1956. Altogether, Mangiarotti’s 13 Olympic medals are the most Olympic medals ever won by a fencer.

Another member of the famous Hungarian fencing team, which included Aladár Gerevich, Rudolf Kárpáti was another vital player in Hungary’s dominance in the fencing world throughout the 1950s and 1960s. Born in Budapest in 1920, Kárpáti was a musicologist by profession, but he nonetheless devoted much of his time to fencing. He was the National Champion of Hungary in fencing throughout the 1950s, and in 1965, he published his autobiography, which was titled "Around the World with a Sword.” Over the course of his Olympic career, which spanned four Olympic Games, Kárpáti won six gold medals: team golds in 1948, 1952, 1956, and 1960, and individual golds in 1956 and 1960. Kárpáti also won seven World Championship gold medals throughout his career. After retiring from fencing in 1977, Kárpáti became the president of the Hungarian Fencing Federation, as well as an administrator with the Fédération Internationale d'Escrime (FIE), the governing body of Olympic fencing.

A third member of the famed Hungarian fencing team that included Gerevich and Kárpáti, Pál Kovács was a unique athlete in that he began his athletic career not as a fencer, but as a hurdler. Though he was promising as a track and field athlete, Kovács decided to switch to fencing and thereafter joined the Hungarian fencing team. As a fencer, he joined his squad in five consecutive Olympic games, beginning in 1936 in Berlin and ending in 1960 in Rome. At these five Olympics, Kovács earned a total of six gold medals and one bronze. Five of his golds came in the team sabre event, while one, in 1952, was in the individual sabre. His solitary bronze medal was won in 1948 in the individual sabre event. After his retirement from fencing, Kovács became the vice president of the FIE in 1980.

Known as one of the most versatile fencers in Olympic history, Italian swordsman Nedo Nadi won at least one Olympic gold with all three of the classic fencing weapons (foil, sabre, and épée). Nedo was trained in fencing from a young age by his father, and like fellow Italian Edoardo Mangiarotti, Nadi trained alongside his brother. As a child, Nadi’s father forbade his sons from training with the épée, which he considered an “undisciplined” weapon, but Nedo, determined to master every style of fencing, often snuck out to practice with the épée on his own.

In 1912, Nedo made his Olympic debut at the Stockholm Games, winning the foil competition at only 18 years of age. Eight years later, in 1920, Nadi returned to the Olympics in Antwerp. There, he accomplished a stunning feat, first by helping the Italian team win a team gold in the foil, and then by winning the gold medal in the individual foil with 22 winning matches and only two losses. Nadi’s disobedience of his father’s rules as a child paid off days later when he won gold in the team épée event. Nadi capped off his incredible performance at Antwerp with two more golds in the individual and team sabre events, earning a record five gold medals at a single Olympics. Nadi’s brother, Aldo, also won medals at Antwerp.

After the 1920 games, Nedo Nadi retired from fencing and taught the sport as a professional in South America. Upon his return to Italy, he served as president of the Italian Fencing Federation and also distinguished himself by fighting in World War I, where he was decorated by the Italian government for bravery.

Another famed Italian fencer, Giuseppe Delfino first learned to fence while working for a Fiat car factory in Torino, where he had access to the company’s sports facilities. His efforts in the sport quickly grew and in time he became one of Italy’s top fencers in the épée, helping his country dominate that weapon in fencing. Across his Olympics career, Delfino was a member of three gold-medal teams, winning first-place medals in the team épée in 1952, 1956, and 1960. He also joined up with six World Championship-winning teams. Aside from these memorable team victories, Delfino was also a successful individual fencer. He nearly won individual gold in 1956, ending only a single touch away from the prize when he lost to American Richard Pew. In 1960, Delfino came to his home country for the Rome Olympics and there achieved his goal of winning gold by defeating British fencer Allan Jay in a tie-break. Delfino won a team silver in the épée in 1964, after which he retired from fencing and became the president of the Torino Fencing Club and later the Ivrea Fencing Club. After his death in 1999, the Ivrea Fencing Club was renamed the “Circolo Scherma Giuseppe Delfino” (“Giuseppe Delfino Fencing Club”) in Delfino’s honor.

Who is the greatest men’s fencer of all time?

The greatest men’s fencer of all time is either Aladár Gerevich of Hungary or Edoardo Mangiarotti of Italy. In his long career as a fencer, Gerevich accumulated the record of winning six gold medals in the same Olympic event, the sabre, and also helped his team achieve 36 years of dominance, with team golds at six consecutive Olympics from 1932 to 1960. Meanwhile, Italian Edoardo Mangiarotti holds the record for the most Olympic medals ever won by a fencer, with 13 medals won during his career, making him the best-performing fencer in Olympic history.

Who is the men’s fencer with the most Olympic gold medals?

Hungarian fencer Aladár Gerevich is the men’s fencer with the most Olympic gold medals. Throughout his Olympic career, Gerevich won six Olympic golds in the team sabre event, and won an additional gold in the individual sabre. Though Italian fencer Edoardo Mangiarotti had more overall medals than Gerevich, Gerevich stands as the absolute winner in terms of his number of gold medals.

Who is the men’s fencer with the most World Fencing Championships gold medals?

Pages Related to Top 6 Best Men's Fencers of All Time