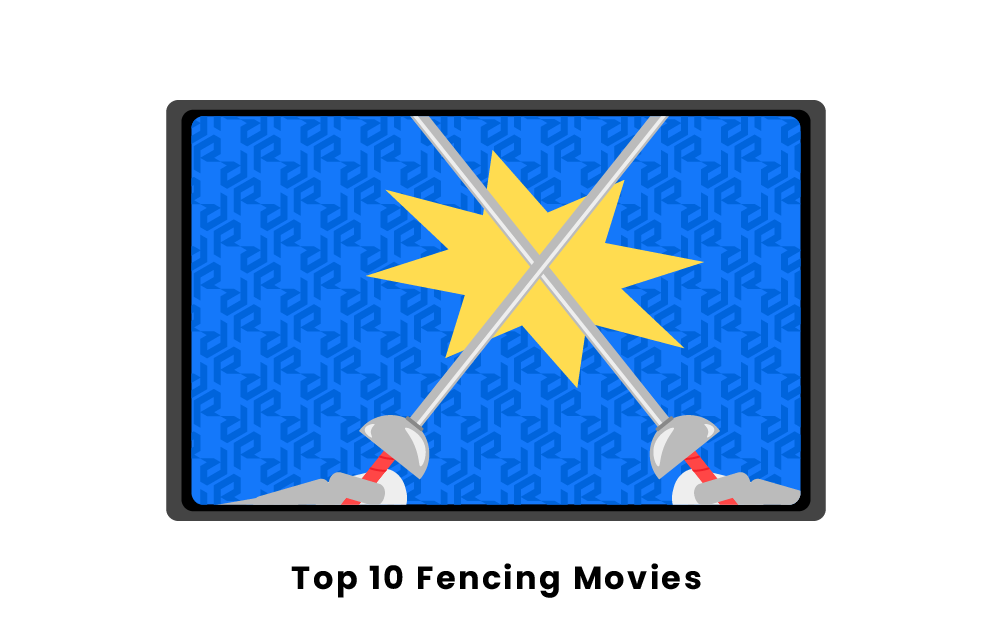 Below we will cover the top 10 fencing movies that either are about the sport or have scenes where the characters use swords. We've ranked each movie based on the scene and its relation to the sport of fencing. If you have not seen the movie, we may describe the scene in detail. If you do not want any spoilers, do not read this piece, just a fair warning.

What are the most popular fencing movies?

The Fencer is an European production, and one of the few movies out there where the modern sport of fencing is central to the plot. Although the movie was released in 2016, the story takes place in the 1950s, when the Soviet Union was dominating parts of Europe. The main character, Endel, is a fencing champion who is running away from Leningrad and his past during the War. The story evolves as Endel starts a fencing group at a school, inspiring the children to take the sport and passionately teaching them. He creates a special bond with his students, one that goes beyond that of just a fencing master. The biggest moment of the movie comes when his students get the chance to participate in a fencing tournament in Leningrad, leaving Endel with two options: going back and facing his past (and possibly the Soviet police), or let down his students.

This movie begins with the encounter between a renowned fencing master, and a mysterious man named Maximilien Suba. While Mastro Villard (Master Villard) is a very respected fencing master with a storied past and many skilled pupils in his academy, Suba's past in the sport is unclear. However, throughout the movie, Maximilian Suba shows himself to be a skilled fencer himself, and a great teacher of the sport as well. All that sparks Maestro Villard's curiosity. Slowly, as the movie goes, we found out more and more about who Suba is, his fencing past, and his secret connection with Maestro Villard, which brought him to the fencing academy in the first place.

As the movie goes, it drifts away from the modern rules of fencing, to add drama and exhilaration. Although at points it showcases fencing as a violent and egotistic sport, the movie is fun for those who like fencing, and provides a nice view (even though somewhat unrealistic) into the dynamics of a fencing academy, and other things that may affect performance in sports such as love, pride, respect, and honor.

En Garde is a three part documentary produced by the FIE (Federation Internationale d'Escrime), fencing's international governing body in commemoration of its hundredth anniversary. The movie was released in 2013 (the FIE was founded in 1913, in Paris), and in its own words tells "fencing's epic story." The documentary goes around the world to uncover all parts about the sport's history. It explores the origins and evolution of swords, important coaches, fencing powerhouses such as France, Hungary, and Italy, fencing in movies. It covers all the way to modern fencing heroes who had been successful in the 2012 London Olympics, the most recent one at the time. In essence, the documentary is a must-watch for those who are inexperienced and want to learn more about the sport, or for veterans who have been fencing for years. To add to that, all three parts are available for free in the FIE's youtube channel, which makes it even more appealing.

The famous James Bond movies are hardly about fencing; nonetheless the sport has made an appearance in Die Another Day, in a scene that became iconic. In the movie, James Bond (played by Pierce Brosnan) first meets Gustav Graves, one of the villains, at a fencing club. The scene starts pretty loyal to the sport of fencing, with several pistes and electronic scoring devices. It can be seen that all equipment was provided by Leon Paul, one of the premier fencing equipment manufacturers in the world, which is based in England. Graves is a really good fencer who likes to place bets on himself when fencing. Of course, James Bond is also a great fencer, and challenges Graves for a fencing match. While they do start fencing with the proper equipment and rules, as the sport is practiced, it soon evolves into a real sword fight around the club, where they don't use the safety equipment, break things, and draw blood from each other. The scene was recorded at the Reform Club in London, and all the fencing parts overseen by Bob Anderson, who famously also worked in Star Wars and Lord of The Rings.

5. The Mask of Zorro

This 1998 motion picture brings Antonio Banderas as Zorro, a masked and mysterious hero that fights to protect the poor and oppressed. His main weapon is a sword, which he uses better than anyone else, having amazing point control, speed, and technique. Although in the movie there is not a single moment where a fencing mask or a modern fencing foil is used, there are certainly elements in the way characters fight that are similar to those used by athletes in the piste. Catherine Zeta-Jones and Anthony Hopkins star in the movie with Antonio Banderas, and all three of them had fencing lessons with a former Olympic athlete, and practiced exhaustively for the movie. Also, in case you haven't noticed, Zorro's main skills are also some of the elements that make a good fencer. The Mask of Zorro and its sword fighting scenes have certainly inspired many people to begin fencing.

This classic Alexander Dumas novel has gotten many cinema adaptations over the years, and most recently in 2011, with Logan Lerman as D'Artagnan, and Ray Stevenson, Luke Evans, and Matthew Macfadyen as Porthos, Aramis, and Athos. Although firearms are used in the movie, it is also filled with sword fights, with moves that resemble that of modern fencing, with weapons that also resemble the modern ones used on the piste. If you are a fencer, you'll probably even see that the footwork may be similar to what is done in the fencing gyms around the globe. The Three Musketeers is not only a good movie, but also a great book. Whether you are interested in fencing or not, you will most likely enjoy the story.

The Star Wars movies definitely revolutionized the movie industry and gathered a legion of fans. But it also inspired a lot of people to start fencing. After all, a lightsaber is still a saber. Star Wars is inevitably linked to fencing, much because of the memorable lightsaber battles throughout all of the franchise's movies. A demonstration of that connection came in 2015 during the Senior Fencing World Championships, when two actors presented using lightsabers and Star Wars attire at the opening ceremony. Many fencers and coaches have been involved in the making of Star Wars over the years, but more famously Bob Anderson, a former Olympian and coach (who has worked in several other movies mentioned in this piece) who doubled Darth Vader, likely the most known villain in movies. With the new trilogy of Star Wars movies out, it is likely that the number of children signing up for fencing classes will rise, inspired by Rey, Poe Dameron, and Finn.

The Princess Bride is a novel from 1973, which got its big screen version in 1986. Fencing makes its way into the movie through Inigo Montoya, who is a master with the sword, and seeks vengeance against the man who killed his father. The movie also brings epic fencing duel scenes, in which many elements from modern fencing can be seen, like the stance and the parries. Most memorable is the scene in which Montoya faces Westley, or the Man In Black. Mandy Patinkin, who plays Inigo Montoya, had been a fencer in college, and worked with the fencing head coach at Yale for two months before being able to record the scene. Both him and Cary Elwes, who plays Westley, also practiced with Bob Anderson, a former Olympian and coach once shooting started. In essence, what made this scene so great was Cary's and Elwes' dedication to learn fencing and hard work practicing it.

The Duellists is a movie from 1977 directed by celebrated director Ridley Scott in which fencing takes a major role. However, fencing in this movie is nothing like the sport we know today, but rather in the form of duels, when people would fence each other for their honor, and inevitably end up injured or worse. Nonetheless, it was from duels like the ones portrayed in the movie that the sport evolved from, and developed into the fun and safe activity we know today. The film tells the story of two Lieutenants, d'Hubert and Feraud who duel each other several times throughout the time of Napoleon's rule in France. What makes the movie even more interesting, is that it is based on a true story! The Duellists brings very well made fencing scenes, in which some elements from modern fencing such as footwork, disegangements, and parries can be seen. This movie can be a great choice for anyone who likes sword action and history.

The Parent Trap is one of Disney's most popular movies from the 1990s, and tells the story of two girls who look suspiciously alike, Annie and Hallie, who meet at a camp. Although Annie and Hallie eventually become good friends, they actually dislike each other for some part of the movie, a rivalry that starts in a fencing match. In the camp, the girls are encouraged to try out fencing, and Hallie and Annie end up fencing each other. The girls have foils in hand and all the proper fencing equipment (you can even see that the equipment is all from Leon Paul fencing, one of the best fencing brands), but they hardly follow the actual rules of fencing. The girls are jumping and running around as they try to hit each other with the foil! Nonetheless, the scene is pretty funny, and ends with both girls and their friends realizing that both girls look very similar to each other.