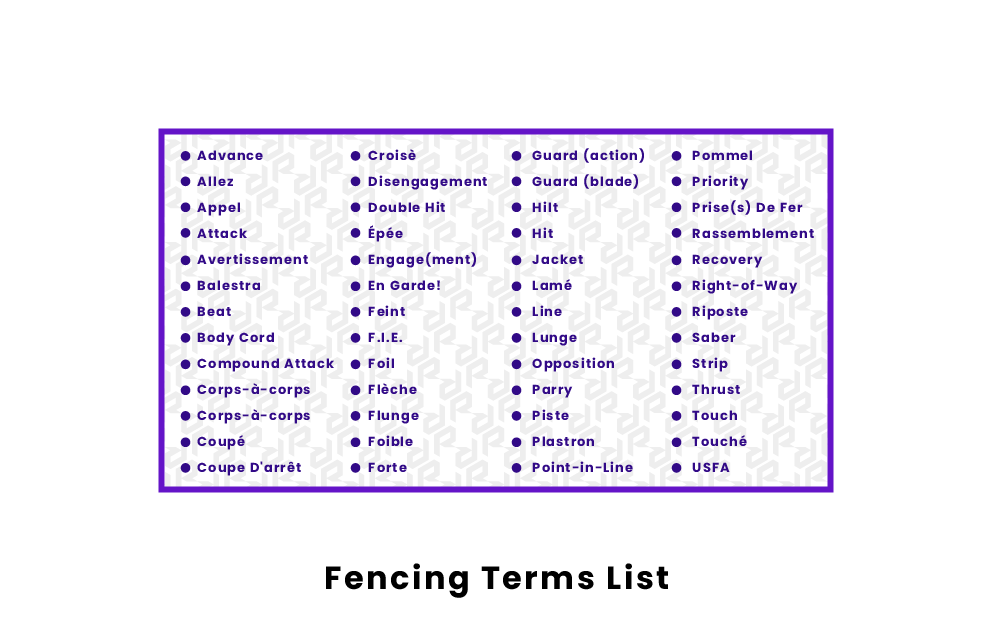 Though fencing is considered to have formed into an organized sport some time during the 15th century, its place of origin isn’t very clear. Both Germany and Italy lay claim to the sport’s birth, and the influence of French culture on the sport cannot be denied either.

The sport’s spanning history across all of Europe has resulted in many interesting words taking on significant meaning. Not sure what either “En-Garde” or “Piste” means? No problem! Read below for descriptions of all the words you need to know when watching or taking part in fencing.

Advance: An advance is when a fencer steps towards their opponent. It is usually a prelude to an attack.

Allez: A french term meaning “let’s go”. The referee uses it to indicate the start of the bout.

Appel: An appel is half of an advance. The fencer takes a step forward with their front leg while keeping their back leg stationary. It is a tactic used to throw the opponent off-balance.

Attack: A single movement or series of movements during which a fencer attempts to score a point. An attack is initiated when one person lunges or extends their arm towards the opponent. In the foil and saber disciplines, the first attacker gains “right-of-way”.

Avertissement: The french term for “warning”. A referee might give a competitor an avertissement for a minor rules infraction, such as leaving the field of play or making bodily contact with the opponent.

Balestra: An attacking move in which the fencer suddenly leaps forward towards their opponent. It is used to catch opponents off-guard, change the bout’s pace, or start a counter-attack.

Beat: A beat refers to hitting the middle of your opponent’s blade in an attempt to provoke or initiate an attack. A successful beat will shift the opponent’s blade out of an optimal position, creating an opening to attack.

Body Cord: A device that connects the fencer to an electrical system of wires that is used to detect when the fencer has been touched by a blade.

Compound Attack: An attack or counterattack involving several moves and feints performed in quick succession, building upon one another to give the attacker an advantage.

Corps-à-corps: A french meaning “body-to-body”. Direct bodily contact between competitors is not allowed in fencing, and so a corps-à-corps merits a reset before the action can continue.

Coupé: An indirect attack used to “dodge” an opponent’s parry. The fencer passes their blade up and over the point of the opponent’s blade and into their defenses. When used after a feint, it can be very effective.

Coupe D'arrêt: French for “Stop Hit”. A counterattack in which the fencer takes advantage of the opponent’s mistakes or hesitations during an attack to regain “priority” quickly score a point.

Croisè: Using one’s blade to guide or take the tip of the opponent’s blade from a high line to a low line, or vice versa. Croisè can be used both offensively and defensively.

Disengagement: A defensive move in which the fencer avoids the attacker’s blade entirely, thus “disengaging”.

Double Hit: Refers to a moment when both fencers touch each other simultaneously, resulting in both competitors receiving a point. Used only in épée.

Épée: One of the three disciplines of fencing. It involves use of the heaviest of the three blades and is characterized by thrusting or lunging movements, use of the entire body as a valid target, and a lack of “right-of-way” rules.

Engage(ment): Engagement refers to contact between the blades of two fencers.

En Garde!: French term for “on your guard!”. It refers to the “ready” position the fencers assume before starting their actions.

Feint: An offensive misdirection or “fake” attack that is used to draw a response from the opponent, who will then be unprepared to counter or parry the true attack.

Foil: One of the three disciplines of fencing. Foil is characterized by lunging movements, with a target area that includes only the chest, as well as right-of-way rules that determines who is eligible to score a point.

Flèche: An aggressive, running attack in which the fencer forgoes the “fancy footwork” and attempts to catch their opponent completely off-guard. Only legal in the foil and épée disciplines.

Flunge: A combination of a flèche and a lunge. It is used only in the saber discipline and came about once running attacks were made illegal in a 1992 revision of the saber rules.

Foible: The weakest part of the blade, extending from the middle to the point. It is a highly flexible area that does not offer much leverage for the fencer.

Forte: In contrast to the foible, the forte is the strongest part of the blade, located above the hilt at the blade’s base.

Guard (action): An action in which the fencer blocks an opponent’s blade.

Guard (blade): The part of the weapon that lies between the handle and the blade, meant to protect the fencers’ hands. Each blade in the three disciplines has a different type of guard.

Hilt: The “handle” of the weapon, where the fencer holds their blade.

Hit: A hit or point that is scored when a fencer touches their opponent’s body in the target area with their blade.

Jacket: In fencing, jackets are used to protect the fencers from the blades. They are usually lightly cushioned and can be made of either cotton, polyester, or some combination of materials.

Lamé: A conductive over-jacket that detects hits and enables electronic scoring in the saber and foil disciplines of fencing.

Line: “Line” is lingo that indicates the direction of the attack. For example a “high line” attack refers to an attack that occurs mostly near the shoulder, while “low line” attacks occur lower on the body.

Lunge: An attacking move in which the fencer moves quickly towards their opponent with an outstretched arm by pushing off of their back leg. It is the most common attacking movement in the sport of fencing.

Opposition: An offensive movement used to deflect an opponent’s blade while simultaneously thrusting towards the opponent in an attempt to score a point. Opposition one of four Prises de Fer

Parry: The basic defensive action that is used to stop an attack. A fencer uses their blade to halt or deflect the attacking blade.

Piste: The word “piste” means the field of play in fencing. Also called the “strip”, it measures 14 meters long and roughly 1.5 to 2 meters wide. Going completely out-of-bounds awards a point to the opponent, while going partially out-of-bounds (with one leg) simply stops the action.

Plastron: A cloth protector that is worn underneath the jacket on the sword arm, providing protection to the armpit, upper arm, and shoulder.

Point-in-Line: Point-in-line refers to a position in which the fencer has an outstretched arm pointing straight towards their opponent’s target area. It is used defensively, as it warrants proper defense from the opponent, thus slowing down their own attack. In the foil and saber disciplines, being in point-in-line position awards the fencer right-of-way.

Pommel: A small knob at the very end of a blade’s hilt.

Priority: Also called “right-of-way”, priority is a means of awarding a fencer the opportunity to score a point in the foil and saber disciplines. The fencer with priority is the only fencer who may score a point until priority is taken away. A fencer can gain priority by taking point-in-line posture, executing a successful riposte, or being the first attacker.

Prise(s) De Fer: French for “iron grip”, a prise de fer is an action in which a fencer contacts their opponent’s blade with their own in preparation for an attack. There are four different kinds of “prise de fer”, including opposition and croisè.

Rassemblement: A defensive posture in which the fencer moves into an upright position (from En Garde) by bringing their feet together.

Riposte: A counterattack in which the defender quickly responds by thrusting or lunging at their opponent following a parry. A successful riposte is one way to gain priority.

Saber: One of the three disciplines of fencing. Saber is unique by virtue of allowing slashing and cutting motions, in addition to the typical thrusting movements of the blade. The target area includes the upper body and the head.

Strip: Another name for the “piste”, or playing surface. It measures roughly 50 feet long and 6 feet wide.

Thrust: A main attacking move in fencing. In the foil and épée disciplines, it is the root of all attacking moves. To thrust, a fencer moves their blade forward towards their opponent along a horizontal plane.

Touch: A touch (or “touche”) occurs whenever a blade legally makes contact with the target area on a fencer’s body. A touch results in a point for the fencer making the touch on their opponent.

Touché: The french term for “touched”. It indicates that a fencer has been touched (and thus scored upon) by an opponent.