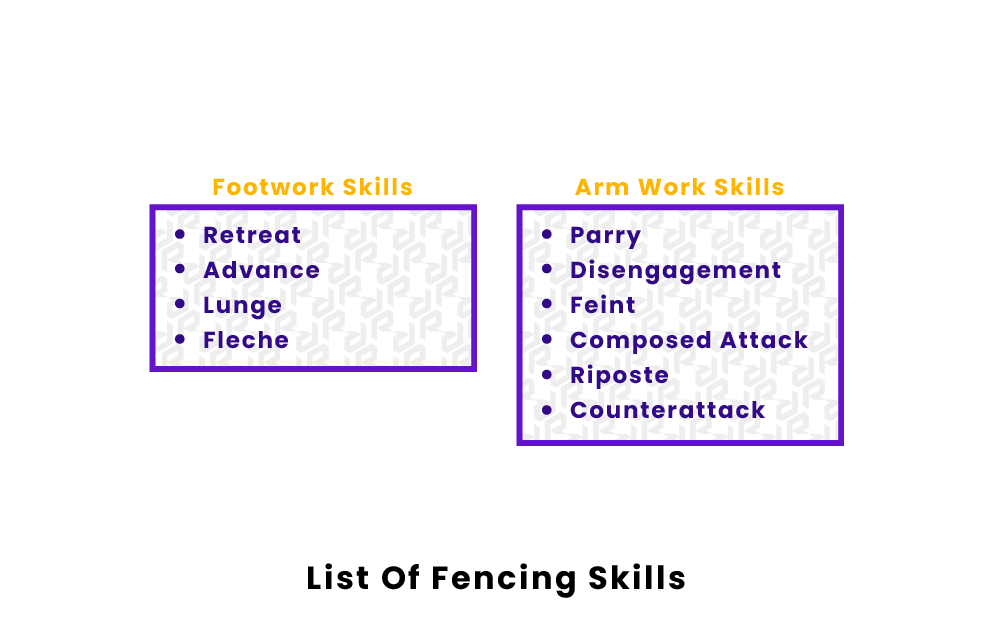 One of five activities to be included in every Summer Olympics, fencing is a fun and intense combat sport. Using three different weapons, fencers score points by making contact with their opponents. Keep reading for a list of the most important skills to learn when becoming a competitive fencer.

Below is a list of the most important skills needed in fencing:

The retreat is the footwork movement that fencers use to move backward. Fencers retreat to move away from the opponent and thus avoid being touched for points. In a retreat, the fencer will first move their back leg backwards and then follow with the front leg without leaving the basic fencing stance or crossing the legs.

The advance is the fencing movement that fencers use to move forward. While you can score immediately after an advance, it is more common that a fencer attacks with a lunge or fleche, which are preceded by an advance. An advance is made by first moving your front leg forward, followed by the back leg, without ever leaving the fencing stance or crossing the legs.

The lunge is the most basic and common attacking movement used in fencing. A lunge is an explosive movement forward, which is used to touch the opponent and score a point. It consists of thrusting the front leg of your fencing stance forward and moving your arms and body along by using the explosiveness of your back leg.

A fleche is another footwork technique used to score. Essentially, the goal is the same as in a lunge, and it is also most commonly used when attacking. A fleche is a "running attack," and it consists of shifting all your weight to your front leg, which will then thrust you forward in a running motion. Fleches in saber look a bit different than fleches in foil and épée, as you can't cross your legs.

The parry is the main defensive movement in fencing. A parry is the simple movement of blocking the opponent's attack with your blade. The movement is done to stop the opponent from touching you and scoring. After a parry is done, the fencer who stopped the attack may have the chance to touch the opponent immediately after, in what is called a riposte.

A disengagement is a simple offensive action, which consists of moving the blade to avoid the opponent's parry. Now, imagine you are fencing someone, and you try to touch them in the middle of their chest. Their natural instinct is to use their blade to stop you: that is, doing a parry. In that case, to avoid being parried, you escape by moving your blade under the opponent's blade, and trying to hit somewhere else. The movement done to avoid the parry and hit the opponent is called a disengagement.

Similar to a disengagement, one of the other major deceptive strategies in fencing is the feint. A feint is a deceptive and false attack, in which a fencer makes a move as if to attack one part of their opponent’s body, hoping to elicit a defensive response so that they can then attack another area. For example, if you feint towards an opponent's chest, causing them to try to parry your blade there, you can then redirect your blade and attack elsewhere. Feints are also sometimes referred to as “Feint-Disengage Attacks.”

A composed, or combined, attack is one in which the fencer does one or more feints with the goal of tricking the opponent. In simpler words, a composed attack is one where the fencer pretends to hit in one place but actually finishes the action in a different place. A compose action can be done either when attacking or when doing a riposte (trying to score after a parry).

A riposte is a rapid attack against an opponent following their parry. Ripostes are used to exploit vulnerabilities in an opponent’s defenses. If a parry leaves a part of their body exposed, an effective riposte will attack precisely that area.

In addition to attacking and defending, counterattacking is also an important part of fencing. A counterattack occurs when a fencer tries to score during the opponent's attack without first trying to parry or defend themself. How a counterattack looks and when it is done varies between the three weapons, but the concept is essentially the same.

What are the most important attributes of a good fencer?

The most important attributes of a good fencer are speed and hand-eye coordination. A fencer needs great speed to move with ease and accuracy, but they also need great hand-eye coordination to handle their saber and move it quickly in response to the actions of their opponent.

What are the most important skills in fencing?

The two most important skills in fencing are movement and bladework. Bladework includes successfully executing counterattacks and parries, which are critical to scoring points and preventing your opponent from scoring. Movement includes footwork moves such as advances and retreats, which allow you to put yourself in a position to score while not leaving yourself vulnerable.