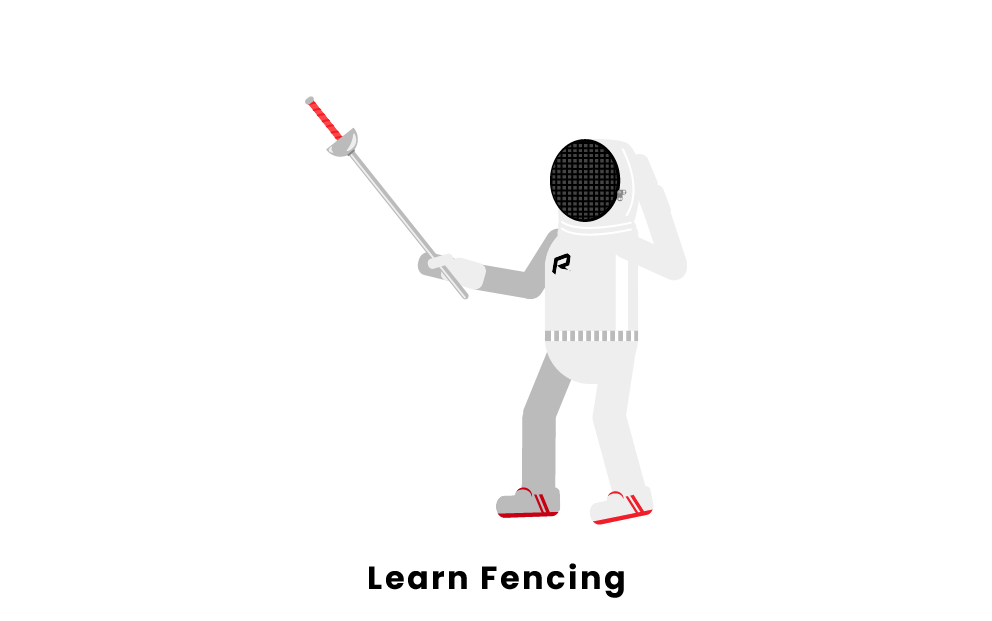 The best way to learn fencing is by jumping right into the sport. You may have gotten interested in the sport by watching a video or seeing a live tournament, but it will be hard to learn fencing just by watching it. There are too many particularities and movements to the sport, and the timing of execution attacks and parries is something that can only be understood by fencing someone else. In addition to that, there are three different weapons in fencing, which vary greatly among each other. Although it is possible to compete in all three, it is recommended to pick one as your main weapon, especially if you are looking to compete in fencing tournaments. It is hard to pick which weapon is your favorite without actually getting a taste of all three. Some clubs do not offer all weapons, or have a focus on only one or two; but most beginners classes will go over the basics of saber, foil, and epee. But be careful, it is important to know the sport's safety rules and equipment in order to practice it, so be sure to check those out before you start. fencing someone else.

Ways To Get Into Fencing

Let's say you are looking to find some new sport to practice. How would you get into fencing? A good start would be to just start looking on the internet for fencing best moments and highlight touches through the time. Slowly start watching complete bout videos from the Olympic Games and World Championships. Once you are hooked and curious enough to try this amazing sport, it is time to look for a local fencing club. Fencing clubs can be big or small, and vary on the level of athletes that train there. In Europe and the United States there are many fencing clubs, as the sport is quite popular. Also, since fencing is an official NCAA sport many american High Schools have fencing as an extracurricular activity.

If you are someone who is really into sports but has never had any contact with fencing before, it is quite improbable that you will be able to teach yourself the sport, nor is it recommended. There are many details in movement and techniques that go unnoticed by someone who has never fenced before. Things such as feet and arm coordination, timing of execution, and understanding what movements to do and when; are just some of the things crucial to the sport that cannot be self-taught, but are rather picked up by fencing people. While it is hard to learn how to actually fence by yourself, it is still possible to study the sport and learn about it alone. Fencing has an extensive theory on which actions during a fencing bout are based, and that can be learned and mastered by anyone who is willing to put the time into it. In addition, refereeing in fencing is not easy and very technical, although most fencing referees have once fenced, it is possible to learn fencing refereeing just by reading instructions and watching bouts.

Learning how to practice the sport does not take that long, the basic movements and techniques can be quickly understood. Nonetheless, the time it takes to finesse those and get really good at the sport depends on how much time the new fencer is willing to put in. Fencing a lot of bouts with many different people as well as repeating the movements many times is necessary to quickly become a good fencer. In addition to that, the time it takes to learn the particularities of each of the three different weapons is not the same. It is likely that the first weapon that a beginner will learn about will be the epee, just because it is easier to learn the basics and it has a more straightforward scoring system. Foil and saber also have priority scoring rules, which are not that simple for non-fencers and must be understood. While epee will be learned faster than foil or saber, all three can be fully learned within 6 months of starting to practice.

Actually starting to fence is the easiest part of the sport. You can start fencing someone just after two or three initial lessons, in which security equipment and basic movements and techniques are taught. Because it is so easy to start practicing, many adults over the age of forty, who for the most part do not have that much free time to invest into learning something new, try the sport for the first time and start practicing regularly, as a way to stay fit and to relax during the week. Nonetheless, it is indeed difficult to become good at fencing. A great fencer spends hours working in mastering the most basic movements. Besides that, it is also necessary to understand the tactics of fencing, which takes some time of experience in the sport.

Fencing is a sport that requires a lot of equipment, both personal, like weapons and a mask, and that are of general use, such as a piste and a scoring machine. With that it is very hard to start practicing the sport without having all the equipment necessary. The cost of owning all the fencing equipment can be pretty hefty, and many people are not willing to spend all those dollars right away. The good news is that it is not necessary to have any piece of equipment if you are a beginner, fencing clubs have all the equipment necessary for someone to start fencing any of the three weapons. With that you won't have to purchase or take any fencing specific equipment for your first fencing class. To start practicing the sport you will need to wear good athletic shoes, a pair that you wouldn't mind reserving to use just for fencing; breathable shorts and shirts to go underneath all the fencing protective gear, and a will to learn and dedicate to the sport.

The main cost attached to learning fencing is a fencing club membership, or any fee that may be charged by the place that you will go to learn the sport. Some bigger clubs may also charge for equipment rent, although that is not common. Individual lessons can also cost extra money, but sometimes a number of individual lessons can be included in the membership charged by the fencing club. Competing in tournaments is an important part of learning fencing, and so fees are charged by competition organizers. As a beginner, you won't have to pay for more than that. Naturally as you evolve in the sport and become better, the costs will increase, as you will want to purchase your own equipment, and go through pieces of gear faster.