How Long Is A Fencing Match? 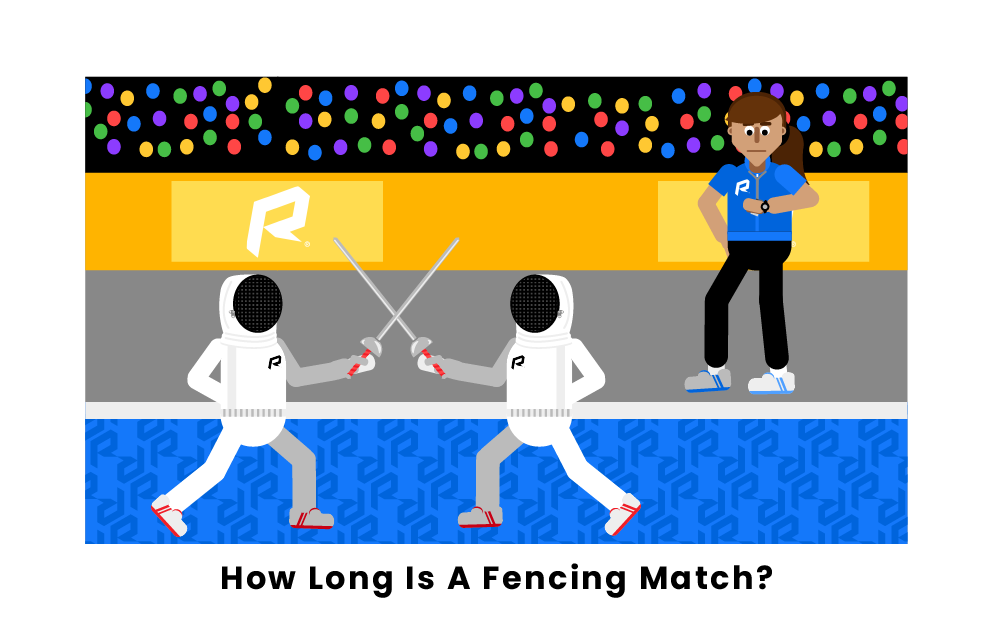 Fencing has been a popular sport around the world for many years, especially since its inclusion in the Olympic Games, which first held fencing events in 1896. A fast-paced, energetic sport, fencing relies upon swiftness and reflexes, and professionals are among the fastest sword fighters on the planet. Below, we look at the rules of Olympic fencing, which represent the standard length of a fencing match.

Starting and Stopping in Fencing

In Olympic fencing, a traditional bout begins with two opponents meeting in full gear but with their masks off. The fencers salute each other and the officials by raising their blades in front of their faces and then dropping them. They then assume the en garde position, with their legs bent and their blades raised, and wait for the signal to begin, which consists of the French words, “Prêts? Allez!” (“Ready? Go!”)

To stop or pause a fencing match, the official will shout “Halt!” if one of the opponents has scored a hit or if the rules have been violated in some way.

In traditional fencing, an individual match proceeds until one fencer scores 15 hits on their opponent. However, each individual bout of an Olympic fencing match can only be a maximum of nine minutes long. These nine minutes are divided into three separate periods, each consisting of three minutes. Each period also has one minute of rest in between in order for the fencers to recuperate and ready themselves for another bout. After the allotted nine minutes have passed, if neither fencer has reached the required 15 hits, the fencer with the most hits is declared the winner of the match.

A team fencing match at the Olympics involves multiple fencers on the same team (representing one country) facing off in various individual bouts. There are a total of nine individual bouts in a team fencing match, each of which lasts a maximum of three minutes. However, each bout can also last until one team’s score reaches a multiple of five. If neither team reaches a score of 45 prior to the end of the ninth bout, the team with the most points wins.

In individual fencing, if a tie occurs at the end of a nine-minute match, one minute of extra time can be added to break the tie. In this minute, whichever fencer scores a hit first wins. However, before the extra time begins, a draw is conducted between the fencers in case no hit is scored within the extra minute. If there is no hit scored within the extra minute, the winner of the draw is declared the winner of the match.

In team fencing, ties are treated similarly, with an extra minute added. One fencer from each team is chosen at random to face off, and whoever scores the first hit in the extra minute wins the match for their team.

How many matches are in team fencing?

How long is an Olympic fencing bout?

In the Olympics, an individual fencing bout lasts nine minutes. Each bout is divided into three periods of three minutes each, with a one-minute rest period in between. This means that, in total, an Olympic fencing bout will last approximately eleven minutes. However, a match could theoretically last less than eleven minutes if one fencer scores the required 15 hits within fewer than three bouts.

How long is a fencing meet?

Fencing events, such as meets and tournaments, can often last many hours, depending upon the number of fencers involved. Fencing matches generally last around ten or eleven minutes each, a meet or tournament (which can involve up to 30 fencers or more) could potentially last three or four hours, depending upon how many matches occur simultaneously. A meet or tournament with more than 30 fencers can often last an entire day, and some meets are even held over multiple days.

Pages Related to How Long Is A Fencing Match?