How Does Scoring Work In Fencing? 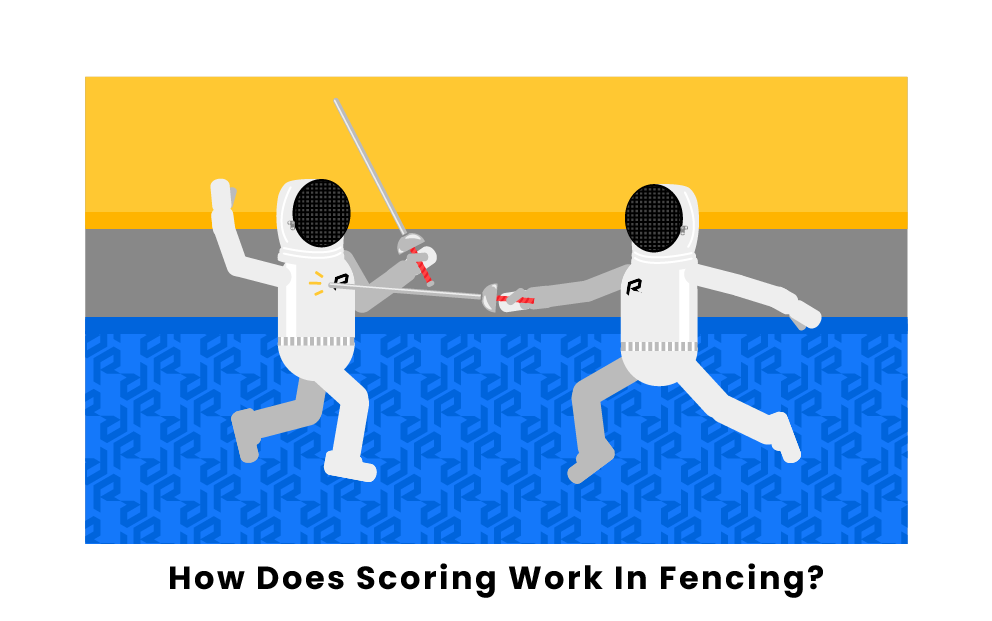 In fencing, athletes score points by hitting each other with their weapons. The goal of the sport is to use such a weapon to touch your opponent while also using it to defend yourself from being touched. In the Olympics and most competitions, the first fencer to reach 15 points is the winner. There are three different weapons called the epee, foil, and saber, that each have different scoring rules. An electronic scoring system is used to automatically keep track of hits. Right of way rules, also known as priority, come into play when fencers strike each other at the exact same time.

The scoring system can change format, size, and other specs, depending on which company manufactured it. Generally, it looks like a rectangular box, with a screen and lights, a green one, a red one, and two white lights. When the green light comes on, it means that the fencer on the left of the referee (the side on which the green light is placed in the machine) has hit the opponent on their valid scoring area. When the red light comes on, the same has happened, but for the athlete on the red side. The white light is used only in foil and will illuminate when a fencer touches their opponent in a non-valid scoring area.

To score in saber, a fencer has to touch the opponent using the tip or side of their saber. The valid scoring area in saber is any part of the body above the waist, including the mask, arms, and back. When doing that, one of the colored lights (red or green) will light up, and the referee will stop the bout and award the point to the fencer whose light went on.

However, most of the time in saber, both lights will go on at the same time, as it is easy for fencers to touch each other at the exact same time. In that case, only one fencer gets the point, which is awarded by the referee based on the right of way rules. If fencers touch each other somewhere outside the valid scoring area, nothing will happen, no lights will go on and the bout will continue.

In foil, the valid scoring area is the torso, excluding the arms. When a fencer touches the opponent in the valid scoring area with the tip of the foil, one of the colored lights will go on, and the referee will stop the bout and award the point. If more than one light goes on, colored or white, the referee will award the point based on the right of way rules. What is special about foil is that the bout is stopped when fencers touch each other off-target. In that case, in foil exclusively, a white light will go on, but no one gets the point.

Epee has the simplest scoring rules in fencing. The valid target area in epee is the fencer's entire body and only touches with the tip of the weapon count. If a colored light goes on, a point is awarded to the fencer who touched the opponent. If both fencers touch each other at the same time, both colored lights will go on, and each fencer gets a point.

Right of way, also known as priority, in fencing is a set of rules covering what happens if both fencers strike each other at the same time. Right of way rules are used in saber and foil fencing. Right of way rules serve as a tiebreaker when both the red and green lights come on.

Per right of way rules, fencers who initiate an attack, parry/evade an attack, develop a “point-in-line” (extending one’s arm towards the opponent’s target area), or counter an attack featuring a feint before its final move, are in line to win the round.

A fencer who takes too long during their advance towards their opponent forfeits their right of way.

Right of way rules also come into play when neither fencer scores a touch during a Sudden Death Overtime round. The priority in this scenario is assigned at random prior to the start of the round.

The referee can also determine that the two fencers both struck one another without any of the criteria surrounding right of way taking place. In this scenario, the fencers are sent back en garde to continue fencing, and no point is awarded to either side.

How do you win in fencing?

Winning in fencing depends on what stage of a competition a fencer is in. In the pool stage, the preliminary stage, the fencer who scores 5 points first wins. Meanwhile, in direct elimination rounds, the fencer who scores 15 points first wins. Bouts also have a set time; in the pool stage, fencers have three minutes to reach five points. In direct elimination, there are three 3-minute periods to reach 15 points. If time runs out before anyone reaches the score, the fencer who has the most points wins the match.

What are the basic variations of fencing?

Fencing has three different weapons, foil, epee, and saber. In all three variations, the goal is to touch your opponent with your weapon while also using it to avoid being touched by the opponent. Although that may sound quite simple, each weapon has somewhat complex rules of its own, which contribute to making fencing an exciting and fair sport.

What do fencers do when the bout is over?

After a bout is over and the referee has declared the winner, fencers don't just turn their backs and leave. There are rules that contribute to maintaining the sport's original etiquette and courtesy. After a bout, fencers must salute each other using their weapons and proceed to shake hands. After that, fencers usually shake hands with the opponent's coach, and the referee, although that is not a rule.

What do the lights mean in fencing?

Pages Related to How Does Scoring Work In Fencing?