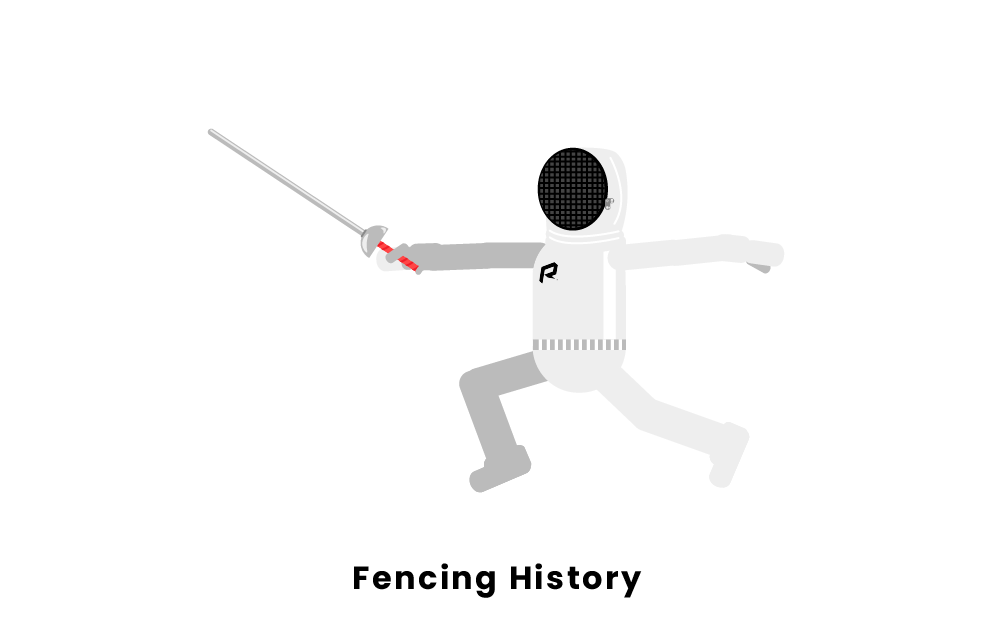 Sword fighting was always part of human history. Duels and wars were fought with weapons and moves that may resemble those of modern fencing. Soldiers used swords to fight in wars and kill their enemies, rather than to play the sport as it is today.

The basic fencing theory started as ways to train those military men for wars. With the evolution of firearms and other warfare technologies, sword combats became less important, and fencing slowly transformed into a sport, rather than military training. It was around the 18th century that it became an activity focused on competition, health, and well being. Slowly, many fencing schools were founded, and fencing transitioned into a sport. Being the ancient sport that it is, fencing has been a part of the Olympics since its first modern era edition in 1896, and it has been featured in every single edition since.

Fencing wasn't created or invented by any one person, but rather slowly evolved from a way to fight into a sport. Fencing does not have one single inventor, but rather many important people who made valuable contributions that helped transform it into the sport that we know today. One of those people was Domenico Angelo, an Italian fencing master who founded a fencing academy in London in 1763. Although Angelo's goal was still to teach real battle techniques, he emphasized the athletic and sporting elements of fencing more than anyone had ever done, playing a big role in turning fencing into a sport. Domenico Angelo is the first in a long list of fencing masters that innovated, invented, theorized, and taught fencing, transforming it into a sport that changed dramatically from its original form.

Just like we can't trace back the invention of fencing to one individual, it is impossible to trace its start to a single country, but rather to important places that played a role in fencing's evolution into a sport, most of them being in Europe. As you just learned, an important moment in fencing history was the foundation of Domenico Angelo's academy in London. Although he had his academy in London, Angelo's home country of Italy is one of the most important places in fencing history.

In Italy the sport became wildly popular, and many Italian masters contributed to fencing's evolution. Similar to the Italian school, the French masters were also crucial in the sport's development. Generally, fencing started in Europe, with major influences coming from the Italian and the French.

Since fencing has an extensive history that dates back to the medieval times, it is impossible to point to a specific period in which fencing started to become popular. Since it was always a way to battle, the sport was always popular in the military, and it continues to be today. The popularity of fencing can also be related to the popularity of the Olympics, as it has always been an event.

Since fencing evolved as a sport in Europe, it is no surprise that the most competitors in the sport come from Europe. Nonetheless, countries like the United States and South Korea have broken into the fencing scene as powerhouses. Different countries are more popular in specific weapons than others. For example, South Korea has a big tradition in Saber, and Estonia has a history of having great epee athletes.

Fencing is the most popular in the following countries: