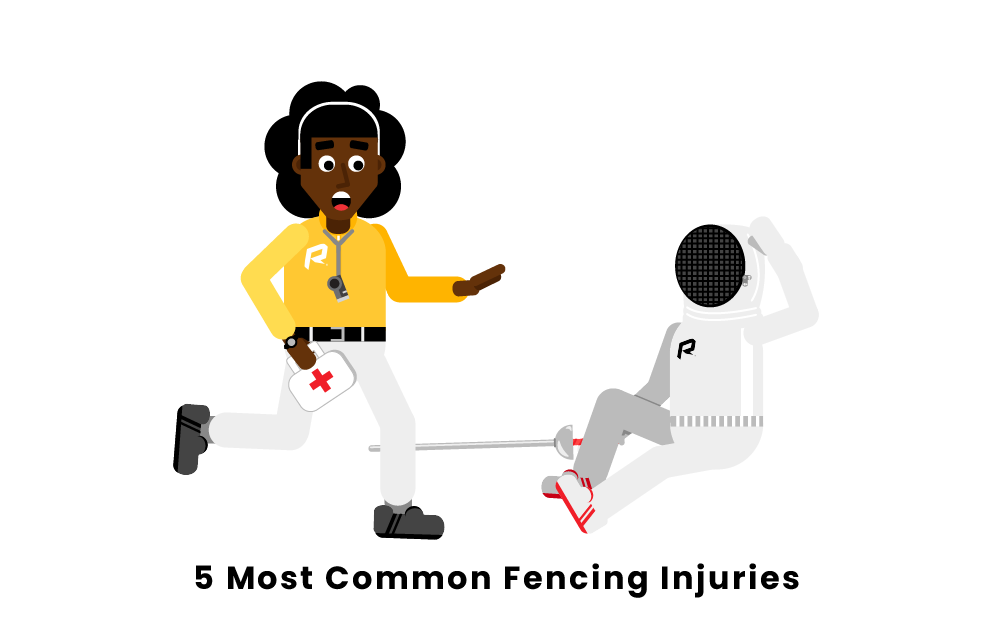 What are the most common fencing injuries?

Bruises are definitely the most common injury in fencing. While some bruises are minor and aren't really considered injuries, there are frequently major bruises caused from the weapon of their opponent. Bruises are more common for beginners and tend to happen on athlete's legs and arms. However, bruises are most frequent on athlete's hands and knuckles and bruises occurring there are what tend to keep athletes out of the sport for a little while. As fencers become more advanced they usually miss less and they learn to better tolerate any bruises. Fencers use Tiger Balm to treat their major bruises when they are really bothering them.

Fencers also commonly get blisters on their hands after practicing and/or competing frequently. Blisters are also more common for beginners, as their hands are not calloused from frequent fencing yet. Treating blisters is very important for fencers, because if they are not taken care of properly, they could very well impede a performance. Preventing blisters comes with keeping your body as dry as possible, which means wiping sweat off every time you get a break in the action. If a fencer does get a blister, the best way to deal with it is to cover it with bandage, tape, and/or cushioning. It is important to not pop or drain blisters, as this could lead to infection and further injury for fencers. Blisters are avoidable by wearing gloves while fencing.

Fencer's elbow is probably the most common injury across fencer's of all levels, meaning that beginners to veteran's get this injury. It comes from 'overuse' and could sideline a fencer for a while depending on how it is dealt with. Fencer's elbow is a form of tendonitis, which occurs when the tendons in one part of the body become inflamed. Pain from tendonitis in fencing usually occurs on the inside of the elbow, the outside of the elbow, and near the thumb. Prevention is the best way to avoid fencer's elbow and the best way to prevent it is to warm up thoroughly before every practice and competition.

Fencer's strain and/or pull muscles all the time. Muscles are strained in their feet, legs, lower back, and even arms. The most common muscle to strain for a fencer is the hamstring. Like most injuries across all sports, they usually stem from athletes not taking care of their body properly and a lack of stretching. If a fencer does pull a muscle, the recovery time is longer than bruises or blisters. Athletes must let their bodies heal before they start using their injured muscles again. And when the muscle does start to recover, athletes then have to rehab surrounding muscles and the injured muscle, strengthening their bodies to be prepared for returning to their sport.

Twisted knees and ankles don't occur that often in fencing, but they do happen occasionally. With a bad step, a fencer could roll their ankle and/or twist their knee. Usually when this happens it isn't that bad and there isn't a recovery period. Sometimes an athlete will have to rest a little and then strengthen their ankle or knee, to avoid future injuries. The best way to avoid this type of injury in fencing, and in most other sports, is to keep your ankles loose and to stay mobile when fencing. When fencers find themselves going from stationary to quick, sudden movements, injuries tend to occur. So when fencing, staying on your toes is important to stay healthy and for success.