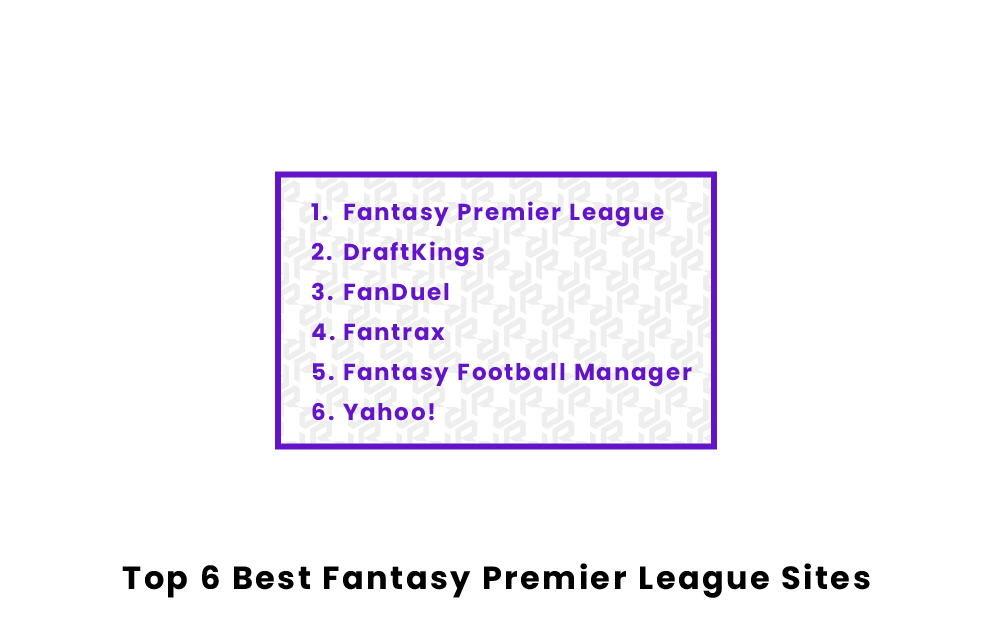 One of the things that excites fans the most these days when it comes to sports is playing fantasy sports. While sports like football and basketball get a lot of attention, there are also lots of fans interested in fantasy soccer. In particular, the English Premier League (EPL) attracts a lot of people due to it being the most popular league in the world. Below, the top six fantasy premier league sites are ranked and discussed.

What Are The Best Fantasy Premier League Sites?

The official fantasy website of the English Premier League, Fantasy Premier League is the number-one site for fantasy EPL. The website has been around since fantasy soccer took off in the early and mid-2000s. They have the best data for fans to look at, and setting up a league is extremely easy. Each player gets a certain amount of money, and each player has a value. Players fill out their rosters by creating a team and having to keep the cost of their team under the max amount.

DraftKings is a website dedicated to all fantasy sports, including fantasy EPL. The company was founded in 2012, and it is headquartered in Boston, Massachusetts. Like the Fantasy Premier League site, players are given a budget, and they have to fill out their eight-man roster within the constraints of that budget. You also must select players from at least three different teams. As for the cost, players can play for as little as $0.25.

Like DraftKings, FanDuel is one of the most popular fantasy sports websites. The website has been around since it was founded by a group in Scotland in 2009. Like DraftKings, they allow players to play for as little as $0.25, and they have a coach corner section that gives advice fantasy EPL players may not find on other websites as far as who’s playing and who’s not. FanDuel certainly pays out a lot of money, as they have handed out over a billion dollars since 2019.

Although not as popular as the previous two websites, Fantrax is another all-encompassing fantasy sports website. Headquartered in Toronto, Ontario, Canada, Fantrax was founded in 2006. Fantrax offers fans a draft-style league similar to fantasy football, where players draft their team and keep that team (for the most part) throughout the season. Players can add players who are not owned and drop those who they do want on their team anymore. They also can make trades with their league-mates.

Back to a website that is solely dedicated to fantasy soccer, Fantasy Football Manager comes in at number five on this list. There is an Amateur Option that is free to play for all players but does not have all of the features of the website. In order to access all of the options, players must upgrade to the Pro version. One of the unique aspects of the Pro version is including an EPL manager in your team who accumulates points along with your players.

The final member of this list is the fourth website that covers all fantasy sports. Yahoo! is similar to DraftKings and Fanduel in that it is a major provider for all fantasy sports players. One of the oldest sports website providers, Yahoo! has been doing so since 1997. When it comes to fantasy soccer, Yahoo! offers both single-game and multi-game contests. There are also season-long leagues for fans to play if they so choose.

While the five websites listed below did not quite make the top six, they still deserve some recognition as honorable mentions: