What Is Fantasy Hockey? 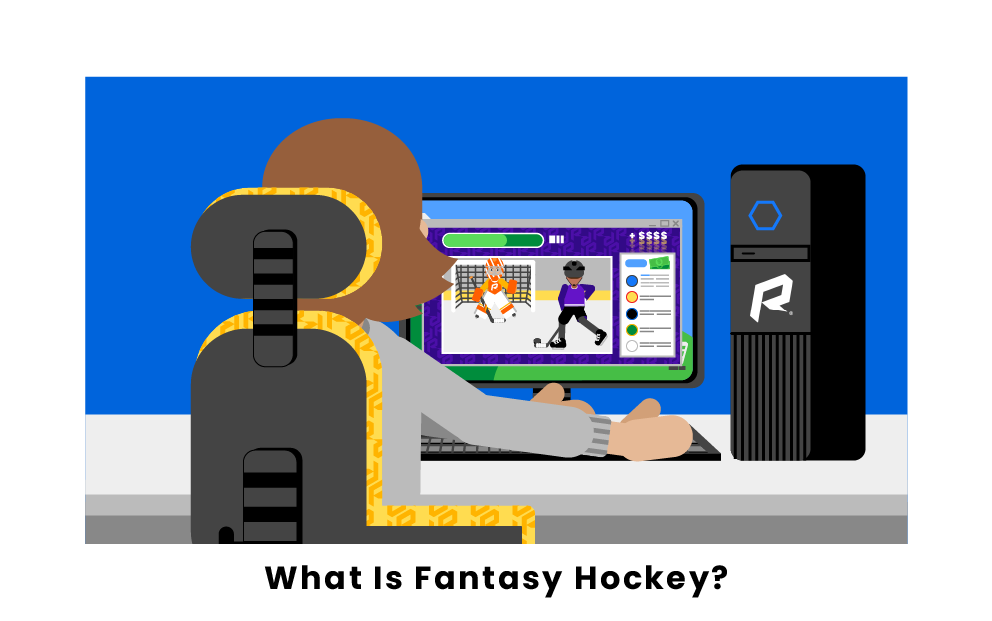 Fantasy hockey is an online fantasy sport, much like fantasy football. League members, typically eight to 12 of them, come together to form a fantasy hockey league. It all starts with a draft, where each member takes turns picking NHL players. Once the draft is done, teams earn points based on how the players they drafted perform in real life. Every week, league members are matched up against one another. At the end of the week, whichever team has more total points wins. There is a regular season and playoffs, just like real hockey.

Where Do You Play Fantasy Hockey?

Most fantasy hockey leagues occur online through a website like ESPN, Yahoo!Sports, or DraftKings. Websites like these do all the work for you: they create the league, track the statistics, and determine who wins each matchup.

If you have a group of people to create a league with, you can create your own league as the “League Manager.” If you don’t have a group to play with, no worries! You can join a public league based on your preferences.

How Does Scoring Work in Fantasy Hockey?

Depending on the league you play in, the scoring for fantasy hockey may vary. Typically, skaters earn points for the following actions:

For skaters, earning fantasy points is very dependent on consistent scoring. If a player doesn’t score a lot of goals or assists, they won’t earn enough fantasy points to remain effective.

Goaltenders, on the other hand, earn points differently from skaters in fantasy hockey. They accumulate points in the following ways:

Goaltenders can score a lot of points on good nights, but also have the potential for a bad impact. If a goaltender lets up a lot of goals, and doesn’t make many saves, they will end up with a negative point total. Goalies are also heavily dependent on the performance of their teams, since they get bonus points for a win. If a goaltender is on a top-tier team, they will rack up a bunch of points from winning games throughout the year, even if they let up a bunch of goals.

Who Are The Best Players In Fantasy Hockey?

The best hockey players are not necessarily the best fantasy hockey players. Some skills, such as defensive ability, do not show up in fantasy scores. Rather, players who score a lot of goals and assists are best for fantasy leagues.

As a result, players on higher-scoring teams are typically better-suited for fantasy. When you are considering a player for fantasy hockey, you should consider the players they play with: are their teammates going to help them score or hold them back?

For a long time, Alex Ovechkin was considered to be the top fantasy hockey player. Ovechkin is arguably the best goal scorer ever, which helped him maintain a high fantasy stock. He also had lots of shots on goal and body checks, which helped his fantasy numbers.

What Are the Types of Fantasy Hockey Leagues?

There are many types of fantasy leagues, each with their own pros and cons. The most common type of league is a head to head (sometimes called H2H) points league. In a H2H points league, league members are matched up against one another each week. Each week is the equivalent of a game, with one team gaining a win and the other receiving a loss. A H2H season runs for about 18 weeks, and then has a few weeks of playoffs.

The difference between “most” and “each” category lies in the result at the end of the week. In a “most” category league, whichever team wins more categories wins the week, with both teams tying if they split the categories evenly. Alternatively, in an “each category” league, teams receive 10 wins and/or losses throughout the week: one for each category. For example, if you won six categories, tied one, and lost three categories, you would receive a record of 6-1-3 for the week. In these leagues, teams have very large records, as there are 10 wins and 10 losses handed out per matchup per week.

The last, and perhaps rarest, type of fantasy hockey league is rotisserie. In this style, there are no weekly matchups or playoffs. Instead, teams work to have the best overall stats throughout the season. Teams receive a score at the end of the season based on their rank in each stat. For example, a team would gain 10 points for having the most assists on the season, whereas the team with the second most assists would receive nine points. The team with the most total points when the season ends is the champion of a rotisserie league.

Pages Related to What Is Fantasy Hockey?