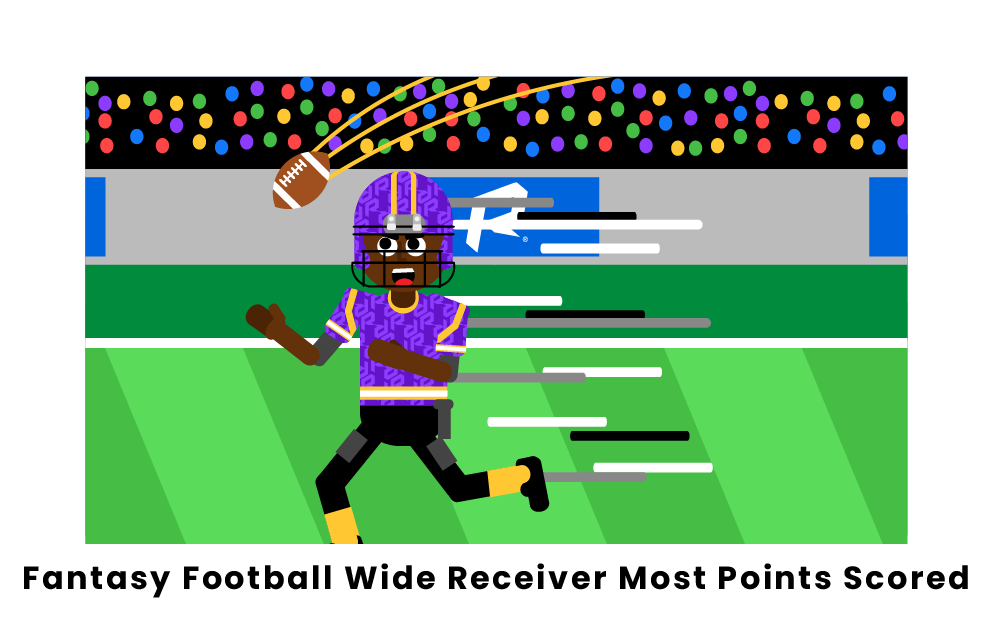 In fantasy football, wide receiver is one of the absolute cornerstones of any good team. Each team generally has two of them, but sometimes up to four. That’s why drafting or picking up good wide receivers can make or break any fantasy team. These following performances, either over the course of a single game or a whole season, are the best of all time by wide receivers. This list was compiled using the standard scoring system rather than PPR or half-PPR.

What Wide Receivers Have Scored The Most Fantasy Points In A Single Game?

With an absolute mind-boggling day on the field, Jerry Rice tops the list of the best single-game fantasy performances of all time. In this game with the San Francisco 49ers in 1990, Jerry Rice managed to put up 225 yards of receiving on 13 catches. Of those 13 catches, five of them went for touchdowns.

On September 23, 1979, Jerry Butler had one of the greatest days of any wide receiver of all time. The wideout for the Buffalo Bills had ten catches for a whopping 255 yards and four touchdowns to boot. All told, this amounted to 50.7 fantasy points, good for second all-time on our list.

As a member of the 1973 Rams squad, Harold Jackson created an incredible 47.8 fantasy points, which probably either won or lost many people their fantasy games that week. Jackson only had seven catches, the lowest number on this list, but he still managed to turn those seven catches into 238 yards and four touchdowns.

On January 10, 2000, the legendary Jimmy Smith embarked on one of his most legendary performances of all time, scoring 47.8 points. When the day was finished, Smith had tallied an other-worldly 291 receiving yards on 15 catches. He also found the endzone three times over the course of that oh-so legendary day.

With his second appearance on this list, Jerry Rice’s fantasy production was simply unparalleled. With 45.9 fantasy points on December 18, 1995, Rice proved how dominant he still was in the mid-nineties. He proved this with a massive 289 receiving yards and three touchdowns from 14 catches.

What Wide Receivers Have Scored The Most Fantasy Points In A Season?

In 2021, Cooper Kupp set the new mark for all future wide receivers to beat when it comes to success over the course of an entire fantasy season. Over 17 games (which was new in the 2021 season, instead of 16), Kupp managed to score 294.5 fantasy points. He gained 1,947 yards through the air, and scored 16 touchdowns.

Naturally having two of the greatest fantasy games of all time, it only makes sense that Jerry Rice is on the list for one of the best full fantasy seasons. In the 1995 season with the 49ers, Rice accumulated 292 fantasy points coming from 1,848 yards and 15 touchdowns.

Randy Moss had an absolutely legendary season among fantasy owners amid what was one of the best NFL seasons, being on the undefeated 2007 Patriots. Moss totaled 1,493 receiving yards, but, more impressively, caught an incredible 23 touchdown passes, for a total of 287.3 fantasy points. It was a dominant season that might not be equaled in terms of touchdowns ever again.

Randy Moss’ 2007 was legendary, but his 2003 season was almost as good. This time playing for the Minnesota Vikings, Moss had one of his best years ever. His season was well-rounded in terms of yardage and touchdowns, with 1,632 yards and 17 touchdowns to his name. It amounted to a huge fantasy season for owners with 265 total points.

Calvin Johnson had one of the most wildly successful careers as a wide receiver in NFL history. His dominance was practically unparalleled, including his 2011 season with the Detroit Lions, in which he scored 263.2 fantasy points. Those points came from 1,681 receiving yards and 16 touchdowns.

Which wide receiver has scored the most fantasy points in a game?

Jerry Rice scored the most fantasy points in a single game by a wide receiver with 52.5. The date was October 14, 1990, when Jerry Rice of the San Francisco 49ers proceeded to absolutely dominate the opposing defense. He scored five touchdowns, tallied 225 receiving yards, and reeled in 13 passes. It was truly the most legendary fantasy performance by any wide receiver, and it might never be matched again.

Which wide receiver has scored the most fantasy points in a season?

The mark for most fantasy points scored by a wide receiver in a single season was set in 2021 by Cooper Kupp of the Los Angeles Rams with 294.5 fantasy points. Kupp was able to achieve the historic feat in the 2021 season partly because it had an extra game from other seasons thanks to a recent rule change. During the season, Kupp had 1,947 receiving yards, plus 16 receiving touchdowns. It will be tough for any receiver to match this ever again.

Who is the best wide receiver to draft in fantasy football?

Drafting in fantasy football is always difficult. You can opt to draft the best receiver from last year, but that player could have a down year or even get injured during the course of the season. In general, though, it’s best to draft a wide receiver who is going to see a lot of passes thrown their way. With early draft picks, you want to draft the best wide receiver from a certain team, so hopefully they’ll have lots of opportunities to stack up yardage and touchdowns.